In a lengthy breakdown of Intel's future strategy for growth, CEO Brian Krzanich singles out the importance of the cloud and the Internet of Things.

In the wake of Intel's decision to lay off 12,000 employees -- 11% of the company's total global workforce -- CEO Brian Krzanich published a statement similar to a manifesto, outlining the company's strategy for the future.

In an April 26 blog post, Krzanich laid out Intel's strategy in a five-point outline that he believes will help to accelerate the chip giant's transformation from a company focused on PCs to a business that is embracing cloud computing and powering connected computing devices.

Among the five core beliefs Krzanich wrote that he feels will hold to be "undeniably true" for the future are the presence of the cloud and the growth of the Internet of Things (IoT) market.

"The cloud is the most important trend shaping the future of the smart, connected world -- and thus Intel's future," Krzanich wrote. "The many things that make up the PC Client business and the Internet of Things are made much more valuable by their connection to the cloud." 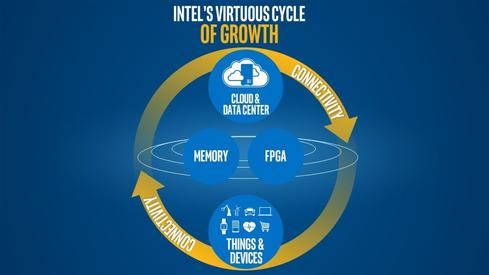 He also noted that there's much more value to unlock from the cloud and data center, and that analytics is the key to doing it.

With all of that in mind, Intel plans to focus innovation on high-performance computing, big data, and machine learning capabilities.

Krzanich also stated memory and programmable solutions, such as field-programmable gate arrays (FPGAs), would deliver new classes of products for the data center and IoT.

The Internet of Things encompasses all smart devices, and every device, sensor, console, and any other client device connected to the cloud. Examples range from traditional PCs to autonomous vehicles.

On the fourth and fifth points, he singled out the importance of 5G wireless technology, which Krzanich believes will become key for access to the cloud. He ended with the prediction that Moore's Law -- which states the number of transistors in a dense integrated circuit doubles approximately every two years -- would continue to progress.

Krzanich writes that Intel would focus on continued investment in capacity, and in research and development, to ensure Moore's Law remains intact, noting that in his 34 years in the semiconductor industry, he had witnessed the advertised death of Moore's Law no less than four times.

"Our strategy is based on these premises, and the unique assets that only Intel brings to them," Krzanich wrote. "We are in a time when technology is valued not just for the devices it produces, but for the experiences it makes possible."

Intel's significant workforce reduction, which it announced during its quarterly report on April 19, will be achieved through worldwide worksite consolidations, a combination of voluntary and involuntary departures, and a reevaluation of programs. This could deliver $750 million in savings this year and annual run rate savings of $1.4 billion by mid-2017.

Nathan Eddy is a freelance writer for InformationWeek. He has written for Popular Mechanics, Sales & Marketing Management Magazine, FierceMarkets, and CRN, among others. In 2012 he made his first documentary film, The Absent Column. He currently lives in Berlin. View Full Bio
We welcome your comments on this topic on our social media channels, or [contact us directly] with questions about the site.
Comment  |
Email This  |
Print  |
RSS
More Insights
Webcasts
The Experts Guide to Ransomware Response
Multi-Cloud Data Management for Modern Applications
More Webcasts
White Papers
A Decade of Passive DNS
Ransomware Security Breach Summary: Food Production
More White Papers
Reports
Intelligent Outcomes Are Key to Business Resilience
Cloud Misconfiguration Mayhem
More Reports