In his opening keynote at Oracle OpenWorld on Oct. 25, executive chairman and CTO Larry Ellison distanced the company from the likes of SAP and IBM, while highlighting major cloud service providers such as Amazon AWS and longtime SaaS/PaaS players such as Salesforce.

Watching Larry Ellison taking potshots at the competition from the keynote stage at Oracle OpenWorld is as much an autumn tradition as leaf-peeping and decorating for Halloween. What was unusual about Sunday night's keynote by Oracle's Executive Chairman and CTO was which companies he targeted.

Despite harsh jabs at SAP and slaps at IBM, during his opening keynote at Oracle OpenWorld 2015 in San Francisco, Ellison worked overtime to distance Oracle from the pack of legacy tech companies that Wired described earlier this month as "the walking dead." Although Oracle was among those on Wired's "walking dead" list -- alongside SAP, IBM, Dell, EMC, Citrix, HP and Cisco -- Ellison took pains in his keynote to position Oracle as a cloud company going up against Amazon AWS, Salesforce, and the comparatively diminutive Workday.

Salesforce CEO Marc Benioff and Ellison have made good sport of going after one another from keynote stages for years. Ellison's digs at Salesforce on Sunday night were more in line with the kind of respectful comments you might hear from a team manager after a hot baseball game, as opposed to locker-room trash-talk.

[Here's what Larry Ellison said about the cloud in 2009.]

According to Ellison, Oracle's new set of competitors is "a stunning change" from what the field looked like 15 or 20 years ago. In applications, Salesforce and Workday have replaced SAP as Oracle's biggest competitors, Ellison said. In the platform space, he said Oracle is going head-to-head with Microsoft, not IBM, while in infrastructure he considered Amazon AWS the behemoth to beat, not IBM or EMC.

"The two companies we have watched most closely over the last two decades have been IBM and SAP, and we no longer pay any attention to either one of them," said Ellison.

Microsoft is the only traditional competitor to Oracle that has "crossed the chasm" and is now competing with Oracle in the Software-as-a-Service (SaaS), Platform-as-a-Service (PaaS), and Infrastructure-as-a-Service (IaaS) spaces, according to Ellison. 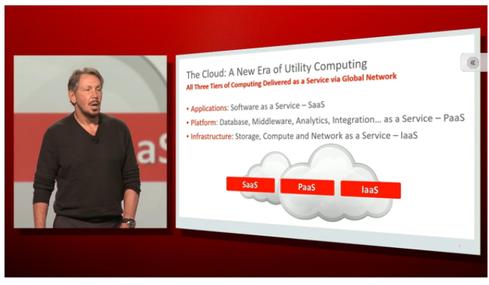 Along with the cloud mantra, Ellison also preached openness from the stage, making it sound like Oracle very much wants to play nice with others -- whether by supporting open source programming languages, or by enabling customers to move data easily amongst Oracle's cloud, a public cloud service (read AWS), or on-premises data centers.

"We are in a generational shift in computing that is no less important than our shift to personal computing," said Ellison. "The reason I say we're in the middle is because it seems like early days. The biggest cloud companies are $6 billion companies, they're not $100 billion companies." The first cloud companies, Netsuite and Salesforce, started 15 years ago, "before we invented the word Cloud," said Ellison. "They were SaaS companies."

Intel CEO Brian Kraznich set the keynote stage for Ellison in his opening remarks: "We all know the cloud will continue its rapid growth. The cloud of tomorrow will be [accessing data from] people and machines. Cloud technologies can speed solution deployments, provide flexibility in meeting customer demand, and provide capex and opex efficiency. Why, then, is it taking so long for this transformation to take hold in the enterprise?"

Oracle and Intel are partnering on products and services that they're betting will move things along for the enterprise.

Worldwide cloud customer numbers revealed by Ellison bring home the point that there's room for growth. According to Ellison:

Trip Chowdhry, Managing Director-Equity Research, with Global Equities research, said in a prepared statement that he expects "Oracle will win market share in the old IT space," from the likes of HP, IBM, EMC, and Dell. In addition, Oracle's fierce pricing competition will depress pricing for Salesforce and Workday. "However, Oracle has zero chance to win against super cloud providers Amazon AWS and Microsoft Azure," wrote Chowdry. "On a scale of 10, if Amazon AWS is 10, Microsoft [Azure] is 8 and Oracle is 2."

That view may explain Oracle's openness about supporting its own apps in other clouds, though it remains to be seen whether migrating Oracle apps to and from a service such as AWS will be as easy as Ellison promises. Either way, the new applications and services announced by Ellison reflected the cloud-first positioning, including:

Susan Nunziata leads the site's content team and contributors to guide topics, direct strategies, and pursue new ideas, all in the interest of sharing practicable insights with our community.Nunziata was most recently Director of Editorial for EnterpriseEfficiency.com, a UBM ... View Full Bio
We welcome your comments on this topic on our social media channels, or [contact us directly] with questions about the site.
Comment  |
Email This  |
Print  |
RSS
More Insights
Webcasts
ROI and Beyond for the Cloud
5 Steps to Solving Modern Scalability Problems
More Webcasts
White Papers
The State of Threat Detection and Response
Threat Intelligence Solutions: A SANS Review of Anomali ThreatStream
More White Papers
Reports
2020: Threats in Review
2020 Threat Hunting Report
More Reports

There's a short sample embedded in the story above. But what Larry really said about the cloud in 2009, when asked by Ed Zander at the Churchill Club, went something like this: "The cloud is water vapor.... My objection to the cloud is the fact that everone is saying cloud computing is not only the future but it's the past... Salesforce is cloud. Salesforce has been around for a decade. Google is now cloud computing. My objection is the absurdity, this nonsense, 'Oh, it's in the cloud.' All it is is a computer attached to a network. What do you think Google runs on? What are you talking about? ...I love the VCs. Give it back to those nitwits on Sandhill Road." (First quoted in Management Strategies For the Cloud Revolution.) Available for replay here: http://allthingsd.com/20091002/another-one-of-these-cloud-computing-rants-and-you%E2%80%99ve-got-yourself-a-stand-up-routine-larry/
Reply  |  Post Message  |  Messages List  |  Start a Board

As more and more individuals downloaded apps, there was less and less need for licensed softwares for desktops.

As more and more companies turn to SAAS for their business apps, licensed databases and software from Oracle is needed by less companies.

Oracle is waking up to this reality - but too little too late.
Reply  |  Post Message  |  Messages List  |  Start a Board

Mark Hurd distanced Oracle from AWS by saying, "The place we like is one of higher profit margins."

This reminds me of Jeff Bezo's maxim, "Your margin is my opportunity."
Reply  |  Post Message  |  Messages List  |  Start a Board
Editors' Choice
Hot Topics