SEARCH
A minimum of 3 characters are required to be typed in the search bar in order to perform a search.
Announcements
Event
Discover the latest in hybrid work trends, including new technologies - Learn more at Interop.com!
Event
SupportWorld Live: May 15-20, 2022 | MGM Grand, Las Vegas, NV
PreviousNext
Cloud
4 min read
article

The primary fallacy of the McKinsey report (as I explained in a recent blog post on Gigaom.com) was in focusing on unit cost rather than total cost. This isn't just an Econ 101 pop quiz question, but rather a key business concern. One of the advantages of on-demand pay-per-use services, such as cloud computing infrastructure-as-a-service, rental cars, hotel rooms, and electricity is that you pay only when you use the service, as opposed to owned infrastructure where you pay even if you've over-provisioned capacity that sits idle.

Alexa shows a spike in traffic at UptimeInstitute.org at the time the report was released, and while it may not look like more than a speed bump, it represents a five-fold increase in traffic versus average. 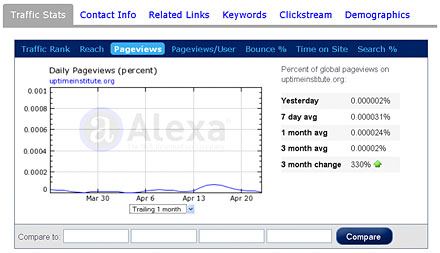 Specifically, Uptime's page views peaked at about 0.0001% of global page views. This compares to their running average of about 0.00002%. In other words, they had a five-fold increase in traffic, so their peak-to-average ratio is 5. The reason the peak-to-average ratio is key is that the cost of owned infrastructure is proportional to the capacity required to service peak demand, whereas the cost of on-demand pay-for-use infrastructure is proportional to the average capacity required. For example, if you have an annual party every year with 100 couples coming in from out of town, it's probably cheaper to rent hotel rooms for the weekend, even at a premium, than to own a house with 100 spare bedrooms that are unused for 363 days of the year.

A hybrid approach to own sufficient capacity to handle average load coupled with a cloud strategy for peak (i.e., own the base, rent the spike), might have been even cheaper. In any event, by using a pure cloud services approach, the Uptime Institute could have cut their total cost by two to two and a half-times, if they followed the data--and ignored the conclusions--of their joint report with McKinsey.

Sure, there are some fine points that can be argued: Is the Alexa sampling methodology accurate, representative, and statistically valid? Did the absolute quantity of global page views change during the sample period? How do page views correlate with server load? How do loads on content servers compare to web servers? On the other hand, since the report was a 1.0 Megabyte PDF, instead of a lighter web page, the actual server load may have been more than five times greater during this period.

The bottom line is, it's the total cost that matters. It may be better to pay a little more some of the time than a little less all the time. If that isn't clear, let me rephrase it: It may be better to pay nothing most of the time than something all the time. This is one of the many ways cloud services, even when and if they are more expensive, generate cost savings.