Microsoft has announced the availability of SQL Server 2016 in public preview. This is just one of multiple data and storage updates to come from Redmond this week.

CEO Satya Nadella first announced SQL Server 2016 at this year's Microsoft Ignite conference. In his keynote, Nadella promised that the intelligent platform would be available in preview this summer and include better data protection, deeper data insights across on-premises and cloud, and the ability to stretch transactional data to Microsoft Azure.

It's not quite summer yet, but Microsoft is ready to debut the first public Community Technology Preview (CTP2) for SQL Server 2016. Eager adopters can get a sneak peek at the new platform's capabilities and test the preview through virtual machine in Azure or in their environments.

Those who choose to download the preview can expect to see new features including:

In a May 27 blog post on the news, Microsoft highlights additional features of the SQL Server 2016 CTP2 including row-level security, temporal database support, dynamic data masking, query data store, and enhanced hybrid backup to Azure. Testers can opt to receive more frequent updates to their previews instead of waiting for CTP3.

Also available in public preview is Live Encoding for Azure Media Services. This is a cloud-based workflow that lets users send a single high-quality video feed to an Azure data center, where it is encoded into an adaptive bitrate stream. The simplified stream process makes it easier for customers to run live events from remote locations while paying only for a good WiFi or mobile network, Microsoft explains. With Live Encoding, users can also run encoders built into cameras or less expensive encoders that don't require as much power. 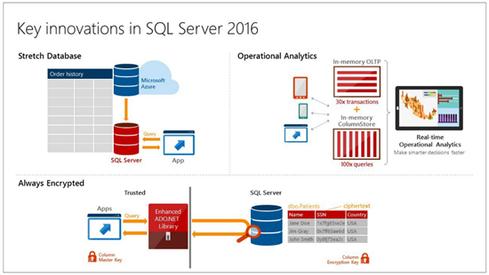 Other news from Wednesday includes the StorSimple 8000 Update 1, which is the first major software release for the StorSimple 8000 series, designed to help enterprise customers handle data growth and storage management. The most recent update includes SDK support for Azure PowerShell and Zone Redundant Storage support, as well as data migration tools to assist users in upgrading to the 8000 series.

Kelly Sheridan is the Staff Editor at Dark Reading, where she focuses on cybersecurity news and analysis. She is a business technology journalist who previously reported for InformationWeek, where she covered Microsoft, and Insurance & Technology, where she covered financial ... View Full Bio
We welcome your comments on this topic on our social media channels, or [contact us directly] with questions about the site.
Comment  |
Email This  |
Print  |
RSS
More Insights
Webcasts
Bolstering Your Enterprise Cyber Risk Assessment
Disaster Recovery/Business Continuity in the New Normal
More Webcasts
White Papers
Guide to Enabling 5G Deployments
Ransomware Security Breach Summary: Food Production
More White Papers
Reports
[Report] 2021 State of IT & SecOps
2021 Application Security Statistics Report Vol.2
More Reports