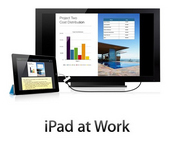 10 iPad Annoyances, Solved
(click image for larger view and for slideshow)
OnLive, which made its name providing video games through the cloud, has launched OnLive Desktop, a virtual desktop to deliver Windows applications to Apple's iPad.

Because its technology is based on its gaming platform, OnLive can deliver robust, low-latency, high-speed apps to the iPad in a way that market leader Citrix Receiver can't. However, Citrix says its virtual desktop offerings are much more suitable for the enterprise than those of OnLive, whose enterprise play is still in development.

OnLive announced availability and pricing Wednesday for its desktop virtualization for iPads, as well as future plans to support Google Android tablets. The free OnLive Desktop app, available in the iPad App Store, includes downloadable Windows 7-based versions of Word, Excel, and PowerPoint, the three pillars of Microsoft's Office suite.

OnLive Desktop Plus, $5.99 a month per user, also delivers the Internet Explorer Web browser and Adobe applications, including Flash. For $9.99 a month, OnLive Desktop Pro offers 50 GB of cloud storage, priority access to the cloud, and additional PC apps.

[ Microsoft may be bringing its productivity suite directly to the iPad. See Microsoft Office For iPad Nears Release? ]

Support for Flash is important because iPad does not natively support the technology. But there's a lot of Flash content out there and it's important for OnLive to bring it to the iPad through a virtual desktop, said Steve Perlman, co-founder and CEO of OnLive.

In a demonstration at the company's offices in San Francisco, Perlman showed how Flash animation can run robustly on an iPad through the Windows IE browser. He visited the Mercedes-Benz site and showed how animation of various car models was delivered. On the CBS-TV website, he showed a clip of the TV series Hawaii Five-O, and demonstrated how scrolling down below the window would stop the video stream to more efficiently deliver content to the page.

OnLive's three data centers--in the Washington, D.C. area, Dallas, and San Francisco--cover nearly all of the continental United States. Internet content is piped to those data centers on 10 gigabits per second (Gbps) connections to deliver the virtual desktops to end users at high speed and with low latency.

Perlman said Citrix Receiver also offers desktop virtualization for the iPad, but that the comparison ends there. "[Receiver] doesn't even try to do media. There's no Flash animation. You can open a video file but it runs at two frames a second so it's like a slide show," he said.

Citrix challenged OnLive's characterization of its products in a series of e-mails late Wednesday. Spokeswoman Julie Geer said that Citrix Receiver supports the use of Flash video on an iPad, has been in the App Store since 2009, and supports multiple operating systems and endpoint devices. She also pointed to the variety of enterprise-level products and services that Citrix Receiver also delivers, including GoToMeeting for online meetings. "In our view, OnLive cannot compete in the enterprise--they simply don't have the infrastructure," Geer wrote.

Citrix also provided a link to ComputerWorld's scathing review of OnLive Desktop, which was previewed at the Consumer Electronics Show in January, in which the writer complained about the limited interoperability between Windows apps on OnLive and native apps on the iPad, such as an inability to cut and paste content or migrate files from one to the other. He also noted that he couldn't use the iPad's keyboard when in OnLive, only a much smaller Windows virtual keyboard, something I also observed during the demo.

But having to move back and forth from a virtual to a native desktop goes with the territory when doing desktop virtualization, said Rob Enderle, principal analyst at research firm the Enderle Group, who called OnLive "kind of the next thing."

Because of its beginnings in delivering gaming via a virtual desktop, OnLive has the capability to deliver a more robust iPad/Windows desktop than can Citrix, Enderle said.

"Citrix was developed about a decade ago around the way the Internet was designed then rather than what it is today," he said. "It was really designed around a static, low-performance terminal type of experience."

OnLive's Perlman spoke of an OnLive Enterprise offering in the works that would let IT departments control user access privileges to software applications. He said several business customers were beta-testing the service, but wasn't specific on when it would be available. When asked to describe a typical user of OnLive Desktop now, he gave examples of students, mobile workers, and small and midsize business users.