18 comments
Comment Now
Each of these innovative datacenters represents the best in class for a design or operational factor. Google's employee sauna? That's just a bonus. 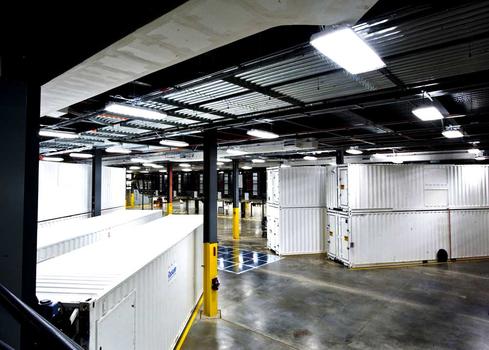 Microsoft in Chicago
At 700,000 square feet, this facility ranks in the top 10 in terms of physical size in DataCenterKnowledge.com's 2010 listing. Its claim to fame is high-density containerization: Microsoft's "ITPAC" boxes each contain about 2,500 servers. They have no backup power. If an ITPAC fails, its compute load is designed to fail over to a spare ITPAC.

Microsoft is continuing to use these containers in new data centers, such as this one in Boydton, Virginia. The company claims that its modular approach and self-contained ITPACs let it build out a data center in half the time traditionally required.

HP, IBM, Dell, and Sun (Oracle) sell containerized data centers. Presumably they all pay a license fee for Google's patent. Google and Microsoft are the biggest cloud players using this modular technique, and eBay is experimenting with the approach. eBay claims to have measured (momentary) PUE values between 1.04 and 1.02 for one of its server boxes under load. Power unit efficiency is a measure of how much the electricity coming into the building is used in computing versus other facility needs. Most traditional data centers operate at PUE of 2.0, or twice as much power delivered as used in computing.

There is always some sort of confusion about which countries are Scandinavian and which ones are Nordic. It all depends on if we are talking about geographical location, or linguistically. It goes like this:

Greenland belongs to the Kingdom of Denmark, but it's autonomous. It's not considered neither Scandinavian nor Nordic even though it has a strong cultural connection with them.

Geographically speaking, the Scandinavian peninsula is made up by Norway, Sweden, and part of the north of Finland. Linguistically, Swedish, Norwegian, and Danish share the word "Skandinavien", which refers to the ancient territories of the Norsemen: i.e. Norway, Sweden, and Denmark. Iceland was also one of the Norsemen's regions and Icelandic belongs to the same linguistic family as Swedish, Norwegian, and Danish. Finnish doesn't belong to this linguistic family.

And then, the French decided to put some order to this mess and came up with calling Norway, Sweden, Denmak, Iceland, and Finland the Nordic Countries. :)

Iceland is part of Scandinavia as well

Live and learn! Did not know that. Greenland too?
Reply  |  Post Message  |  Messages List  |  Start a Board

I was remembering that there was a great video about Iceland on Internet Evolution by Steve Saunders. I had the intention of saving it before IE disappeared, but then at the last minute I forgot as I was quickly saving my own stuff. :( It would have been nice to have it here as illustration for this discussion.

Iceland is part of Scandinavia as well. :)

There is at least one project to build out a data center park in Iceland. It was announced 5 years back, if I recall correctly, and has several tenants at this time. As Stratustician noted, Iceland's limitation is its fiber density. The Scandanavian countries are all better situated from that point of view.
Reply  |  Post Message  |  Messages List  |  Start a Board

Got a note from "Ted T Business" that the photo (from Bing) purporting to be the New York Stock Exchange Euronext in Mahwah, New Jersey is in fact the data center in Carteret, NJ. For what it's worth, here is the Bing photo that this reader claims is Mahwah:

Iceland is a smart choice for datacenters that don't pollute at all. In fact, all cold-climate countries are ideal for datacenters.The Nordic and Scandinavian countries have also the advantage of using renewable energy.

And and we see, more and more datacenters are populating this part of the world.

Most likely you won't see any. :) Do you want to hear more? Every year in November there is the three-day Slush conference in Helsinki for European startups and VCs.

There is a sauna for all the attendees who wish to discuss business there, or simply take a break and relax. Yes, these things happen only in Finland. :D

Susan, I won't hold my breath to see any data centers with saunas in NYC :)
Reply  |  Post Message  |  Messages List  |  Start a Board

The sauna in Google's data center in Finland is normal. There are more saunas than cars in Finland. You can find a sauna in most companies, factories, apartment buildings, and of course many people have their own sauna at home.

It is common for employees to go to sauna after their work hours before going home. This sauna was already there for the employees from the old paper mill. Many business meetings take place in sauna. :)

>I'm sure extending the pipes would be preferrable to shovelling the #$%! long distance.