It's also offering a big discount for computing jobs that aren't time sensitive and thus can run during low-demand times.

Google on Monday reduced the price it charges for Cloud Platform virtual machines by 30% and introduced Preemptible Virtual Machines, a type of VM that runs intermittently and costs 70% less than traditional VMs.

The reduction continues a series of price drops among major public cloud providers over the past several years. Last year, for example, Google dropped prices in March and October; Amazon announced price reductions in March, July, November, and December; and Microsoft dropped prices for its Azure cloud in January, March, and September.

The slashing has been deep enough that major cloud companies, including HP, have repositioned their public cloud businesses to focus more on enterprise customers. There could still be room for further price reductions, however, given that Amazon's operating margin for AWS was almost 17% during the first quarter of the year, the first time the company has broken out cloud revenue and operating costs.

Google now claims its Cloud Platform is "40% less expensive for many workloads" compared to the competition. It also offers a total cost of ownership (TCO) tool, which lists various AWS configurations that cost between 67% to 157% more than Google Cloud Platform. 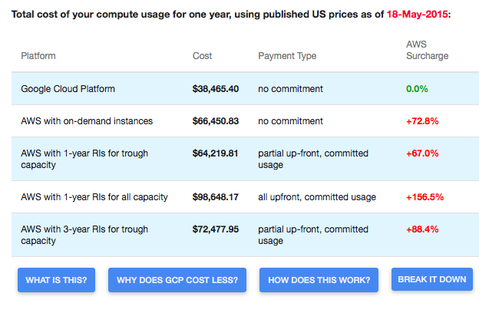 However, that pricing depends on the specific job, and most cloud service providers have specific strengths and weaknesses, as well as negotiated discounts, Gartner analyst Lydia Leong said.

"On a 'street pricing' level, AWS, Azure, and Google have been roughly similar," said Leong, via email. "I would anticipate that AWS, which hasn't done a recent major price cut on virtual machines, is likely to do so, although I would not necessarily assume that they'll drop prices as low as Google has, since [Amazon] currently enjoys the premium position in the market."

Leong said she expects Microsoft will match any AWS price drop, since they have publicly pledged to do so.

"Google is gaining some traction in the market, but they are a provider with far more potential than is manifested in today's capabilities," said Leong.

Preemptible Virtual Machines (PVMs) are similar in concept to AWS Spot Instances. They're suited for jobs that aren't time-sensitive and can be interrupted. Google's Chrome security team uses them to run its Clusterfuzz tool to conduct randomized tests on the security of Chrome's code.

Descartes Labs, an image recognition startup in Los Alamos, New Mexico, has been using PVMs to analyze satellite pictures as a way to assess the health of farmers' crops around the globe. The company relies on commodity computing hardware in conjunction with its own software and algorithms on Google Cloud Platform.

"Our initial reason for choosing Google Cloud was because of the close proximity to the entire Landsat archive," said Mark Johnson, co-founder and CEO of Descartes Labs, via email, referring to the government-sponsored repository of satellite land images. "For big data jobs, one of the biggest costs is moving around and storing data. The Landsat archive is a gold mine of information about our planet. If we wanted to download it, it would have taken 25 years on a 10 megabit connection, not to mention the exorbitant storage costs."

Assessing the location and health of crops worldwide involved preparing over a petabyte of NASA satellite imagery -- 40 years of pictures covering over 100 billion square kilometers -- to make it ready for the company's machine learning algorithms.

[Want to see how Amazon is bidding for continued dominance in cloud infrastructure? See Amazon Seeks Next Generation Of Cloud Users.]

"Given that we were processing so much data and that we're a seed-funded startup, it was imperative that we bring down costs as much as possible," said Johnson. "Time wasn't an issue for us, since the job could have run over multiple days."

Google personnel suggested that Descartes try the company's new Preemptive VMs for its project, which Johnson said saved the company 70% on its bill. The job, which utilized almost 30,000 CPUs, still got done in 16 hours. "PVMs will become an important part of our processing and machine learning pipeline for non-time-critical tasks," said Johnson.

Thomas Claburn has been writing about business and technology since 1996, for publications such as New Architect, PC Computing, InformationWeek, Salon, Wired, and Ziff Davis Smart Business. Before that, he worked in film and television, having earned a not particularly useful ... View Full Bio
We welcome your comments on this topic on our social media channels, or [contact us directly] with questions about the site.
Comment  |
Email This  |
Print  |
RSS
More Insights
Webcasts
The Experts Guide to Ransomware Response
Multi-Cloud Data Management for Modern Applications
More Webcasts
White Papers
Global software company contracts with CBTS for Virtual CISO
Ransomware Defense for Dummies
More White Papers
Reports
Dark Reading Report: Battle for the Endpoint
Trustwave Global Security Report
More Reports