At the InterConnect conference, IBM announced new partnerships with VMware and GitHub as well as expanded use of Apple's Swift. The moves extend IBM's reach into the cloud and mobile development.

IBM is expanding its presence in the cloud and at the mobile edge according to announcements made Monday, Feb. 22, at its InterConnect conference in Las Vegas. In a series of press releases, IBM told the industry that it is basing a pivot from enterprise software to enterprise cloud on a series of strategic partnerships designed to make it easier for software developers to build their products on IBM technology.

Four separate announcements together paint a picture of what IBM is pushing developers to do in the cloud. Within these announcements, IBM strengthened an existing mobile partnership, released details of a new development partnership, offered new options for cloud-based virtualization, and described the global platform that ties all the new cloud development pieces together. The basics of the announcement were:

Al Hilwa, program director for software development research at IDC, is attending the InterConnect conference. In a telephone interview from the conference, he said that tying mobile development and cloud services together makes great sense. "Cloud and mobile are very related, tied at the hips from the get-go," Hilwa said. He noted that many mobile apps rely on a robust server infrastructure, and, "A lot of the developers found it easier to use the PaaS services than to build their own back end." 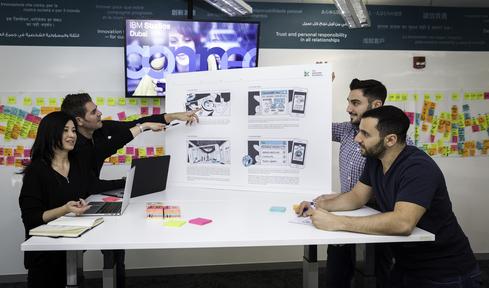 Developers work on mobile applications in the cloud.

The most far-reaching of the announcements involves "connect" services that turn traditional software components into Web services and connect software and services across a wide variety of platforms. The connect pieces include those for WebSphere, DataWorks, z/OS, and the Message Hub, as well as components for big data analysis and turning pre-existing applications into services in the cloud. One significant factor in all of these is the ability to create and work with services that exist in the IBM cloud, a private cloud, on-premises deployment, or a combination involving any or all of these platforms.

GitHub has become a significant platform for development teams sharing code versions. IBM has announced a partnership with GitHub that will put the shared code system into Bluemix, allowing for cloud-based development of both traditional and cloud-based applications. The partnership will bring GitHub to more enterprise development groups while allowing those groups to incorporate agile, team-oriented development in ways not possible with earlier, more "traditional" code repositories.

IBM's new strategic partnership with VMware will provide the ability for IBM customers to deploy pre-configured VMware SDDC instances on the IBM cloud. The first important implication of the partnership is the availability of IBM and VMware technical expertise to assist customers who are deploying VMware environments in the cloud or in hybrid configurations.

The second implication of the announcement comes on the financial side, with VMware offering monthly licensing fees that are consumption based, rather than existing enterprise licensing plans based on maximum anticipated usage. Between the two sides of the announcement, IBM customers should find it much easier to deploy cloud-based VMware, while existing VMware customers now have an easier path to the cloud based on IBM infrastructure.

As for Swift, the Apple-developed language has become the standard for developing iOS software. IBM announced that it has extended Swift from the mobile client toward the core of the enterprise with a Swift runtime and Swift package catalog. According to the IBM press release, "By bringing Swift beyond the client to the server, IBM is breaking down barriers between front-end and back-end development, which can provide enterprises a single language to build rich experiences and back-end business logic."

Hilwa said that extending Swift beyond the mobile client makes sense for IBM. "I think you can look at it as part of IBM's journey to transform itself to make itself attractive to the modern developer," he said. Hilwa pointed out that the Apple partnership is strategic for IBM (and for Apple) because it provides IBM with an existing, accepted platform for mobile enterprise development. 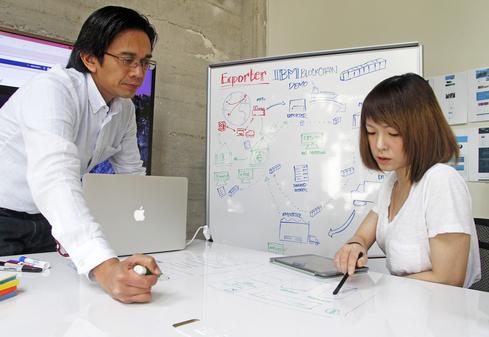 In Hilwa's view, it's important that IBM continue its move toward mobile and the cloud. "I think the world is changing in how IT organizations procure and buy software and service," he said, explaining, "[the world is] buying more service than software. IBM is transforming to deal with it."

There is a second transformation that is just as important as the move to services, and that's the way in which companies are paying for those services. Hilwa said, "Enterprises are buying by the glass in a pay-as-you-go fashion. Amazon has conditioned them to do that. IBM has to emulate that model and charge pennies for seconds [of service]."

While these announcements are important, Hilwa indicated that the fact of IBM's cloud move is more important than the details. "You have to start somewhere and I think IBM is doing the right thing," he said. In any case, Hilwa said, "There's no going back."

Curtis Franklin Jr. is Senior Editor at Dark Reading. In this role he focuses on product and technology coverage for the publication. In addition he works on audio and video programming for Dark Reading and contributes to activities at Interop ITX, Black Hat, INsecurity, and ... View Full Bio
We welcome your comments on this topic on our social media channels, or [contact us directly] with questions about the site.
Comment  |
Email This  |
Print  |
RSS
More Insights
Webcasts
What We Can Learn from Sports Analytics
Building the SOC of the Future: Next-Generation Security Operations
More Webcasts
White Papers
The 2020 Duo Security Trusted Access Report
The 2020 Duo Security Trusted Access Report
More White Papers
Reports
How Data Breaches Affect the Enterprise (2020)
Special Report: The Changing Face of Threat Intelligence
More Reports