IBM is offering a set of APIs and cloud services through its BlueMix platform to simplify development for networked devices.

The service provides developers with a set of application programming interfaces (APIs) designed to simplify the process of accessing data from Internet-connected devices and using that data for business goals.

In a phone interview, John R. Thompson, VP of the Internet of Things (IoT) group at IBM, said there are more than 100 different protocols for communicating among devices. "At the end of the day, it's the Tower of Babel," he said.

Research firm IDC anticipates that there will be as many as 28 billion IoT devices by 2020, up from an estimated 9 billion today. Gartner estimates that figure will be 26 billion. All these IoT devices can be expected to throw off a significant amount of data. Thompson sees IBM's IoT Foundation as a platform that can help businesses use this information in a way that's meaningful to their business goals.

"If all you do is connect data and don't do anything with it, what's the purpose?" Thompson asked.

To provide a sense of how companies might use IoT data, Thompson described a factory with network-connected pumps. The factory could have people monitoring the pumps, he said, but it would be more efficient to create an application to monitor pump data and to use predictive analytics to determine when pumps would be likely to fail and to schedule preventive maintenance accordingly. 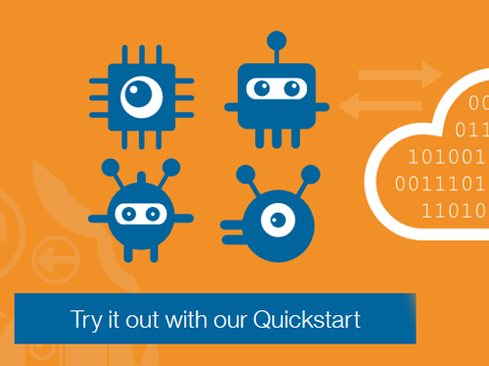 "What our analytics do is watch the data, compare it to known patterns, then get a technician dispatched to the right pump," said Thompson.

IBM's IoT Foundation is a BlueMix-managed cloud service, hosted on IBM SoftLayer. It has been available as a beta service since May and is now available in general release. IBM is also introducing an IoT partner program and is providing a set of certified instructions, which it calls recipes, for connecting devices from various partners.

Thompson believes that connecting industrial devices will only amplify the security issues raised by the bring-your-own-device trend. "A lot of these industrial devices are designed to be open and friendly with each other," he said. "These devices are all like kindergartners walking up and hugging each other; they're not like people who wash their hands."

On top of that, Thompson says companies are still trying to figure out how to make IoT devices easier to use: "If you're going to push this out to the masses, it has to be usable."

No one said the Internet of Things would be easy; but IBM hopes it can make IoT development less difficult.

Thomas Claburn has been writing about business and technology since 1996, for publications such as New Architect, PC Computing, InformationWeek, Salon, Wired, and Ziff Davis Smart Business. Before that, he worked in film and television, having earned a not particularly useful ... View Full Bio
We welcome your comments on this topic on our social media channels, or [contact us directly] with questions about the site.
Comment  |
Email This  |
Print  |
RSS
More Insights
Webcasts
Fact or Fiction? The Truth About Cloud Native Security
Leveraging Infrastructure as Code to Streamline Security & Operations
More Webcasts
White Papers
Are Your Managed Services Right for Your Business?
Today's Hybrid Work Model Requires a Hybrid Approach to Security
More White Papers
Reports
The State of Malware Threats
2021 Digital Transformation Report
More Reports