IBM is bidding for European developers to come to the Bluemix cloud's development platform by opening a "garage" in Nice, France. Its Bluemix Garage will give French developers a physical environment in which they will have access to the latest tools and development practices for next-generation applications.

IBM already operates three Bluemix garages. The idea started in San Francisco in April 2014 and then migrated later that year to the Level39 startup incubator in London. A Toronto garage was added in August 2015 in the Digital Media Zone (or DMZ) established there by Ryerson University. The Nice facility is part of the European Business Innovation Center in Nice Metropole, one of Europe's largest business incubators.

IBM is using the idea of a Silicon Valley garage as a way to attract developers to techniques such as paired programming, test-driven development, and continuous delivery. It makes 140 tools, languages, and services available via the development environment offered in the Bluemix Platform as a Service and teaches developers how applications can be made to scale automatically in the cloud. 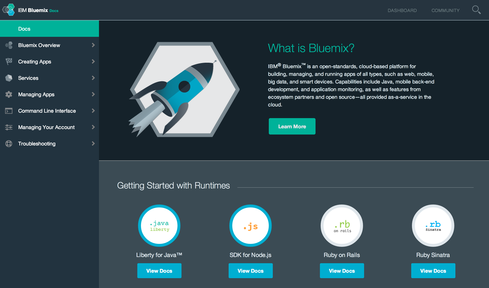 One early user of the Nice garage is ADVANSOLAR, which produced an electric bicycle rental service in a few weeks -- half the time it anticipated -- by developing applications in the garage. IBM offers instruction on IBM Design Thinking in the garage as well as eXtreme Programming and Lean Startup entrepreneurial business practices.

"Working with IBM Cloud and design experts enabled us to quickly identify the most important features of our new service, then build and deliver them rapidly," said Raphael Briere, CEO of the mobile application company, in the March 22 announcement. Part of the difficulty of the development process was gauging the right pricing for the new service and building it into the application, he said.

In addition to programming tools, ADVANSOLAR used data collection via the Internet of Things; NodeRed, a visual tool for wiring together hardware devices; and the Node.js server language for JavaScript applications. The combination allowed the firm to both know the status of its bicycles and provide a reliable customer experience.

Steve Robinson, general manager of IBM client technical engagement, said the garages are not just aimed at startups. They are also a way for large enterprise developers to step outside their offices and get a fresh look at problems using services now available through Bluemix, including Watson analytical services. The four garages are helping draw 20,000 new developers a week to the Bluemix cloud, he said in the announcement.

IBM describes Bluemix as the world's largest implementation of Cloud Foundry, the open source PaaS project. It claims 120,000 applications are developed each month on Bluemix.

Charles Babcock is an editor-at-large for InformationWeek and author of Management Strategies for the Cloud Revolution, a McGraw-Hill book. He is the former editor-in-chief of Digital News, former software editor of Computerworld and former technology editor of Interactive ... View Full Bio
We welcome your comments on this topic on our social media channels, or [contact us directly] with questions about the site.
Comment  |
Email This  |
Print  |
RSS
More Insights
Webcasts
The Threat From the Internet - and What Your Organization Can Do About It
[Free Virtual Event] Using Microsoft in 2020 & Beyond
More Webcasts
White Papers
Get The Key to Cloud Success
State of Endpoint Security: How Enterprises Are Managing Endpoint Security Threats
More White Papers
Reports
2020 Cybersecurity Outlook Report
Cyber AI: An Immune System for Email
More Reports