Some people accuse Red Hat of dusting off an old idea, Linux containers, and presenting them as if they were something new. Well, I would acknowledge Sun Microsystems offered containers under Solaris years ago and the concept isn't new. But Docker and Red Hat together have been able to bring new packaging attributes to containers, making them an alternative that's likely to exist alongside virtual machines for moving workloads into the cloud.

And containers promise to fit more seamlessly into a DevOps world than virtual machines do. Containers can provide an automated way for the components to receive patches and updates -- without a system administrator's intervention. A workload sent out to the cloud a month ago may have had the Heartbleed vulnerability. When the same workload is sent in a container today, it's been fixed, even though a system administrator did nothing to correct it. The update was supplied to an open-source code module by the party responsible for it, and the updated version was automatically retrieved and integrated into the workload as it was containerized.

That's one reason why Paul Cormier, Red Hat's president of products and technologies, at the Red Hat Summit this week, called containers an emerging technology "that will drive the future." He didn't specifically mention workload security, rather, he cited the increased mobility a workload gains when it's packaged inside a container. In theory at least, a containerized application can be sent to different clouds, with the container interface navigating the differences. The container checks with the host server to make sure it's running the Linux kernel that the application needs. The rest of the operating system is resident in the container itself.

Is that really much of an advantage? Aren't CPUs powerful enough and networks big enough to move the whole operating system with the application, the way virtual machines do? VMware is betting heavily on the efficacy of moving an ESX Server workload from the enterprise to a like environment in the cloud, the vCloud Hybrid Service. No need to worry about which Linux kernel is on the cloud server. The virtual machine has a complete operating system included with it. 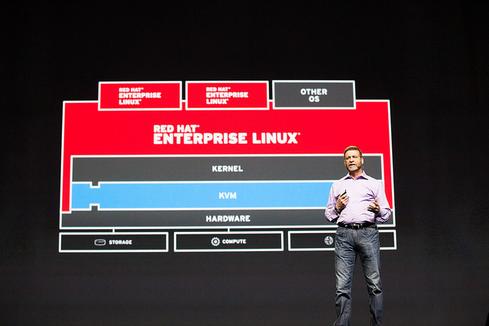 But that's one of the points in favor of containers, in my opinion. Sun used to boast how many applications could run under one version of Solaris. In effect, all the containerized applications on a Linux cloud host are sharing the host's Linux kernel and providing the rest of the Linux user-mode libraries themselves. That makes each container a smaller-sized, less-demanding workload on the host and allows more workloads per host.

Determining how many workloads per host is an inexact science. It will depend on how much of the operating system each workload originator decided to include in the container. But if a disciplined approach was taken and only needed class libraries were included, then a host server that can run 10 large VMs would be able to handle 100 containerized applications of similar caliber, said Red Hat CTO Brian Stevens Wednesday in a keynote at the Red Hat Summit.

It's the 10X efficiency factor, if Stevens is correct, that's going to command attention among Linux developers, enterprise system administrators, and cloud service providers. Red Hat Enterprise Linux is already a frequent choice in the cloud. It's not necessarily the first choice for development, where Ubuntu, Debian, and Suse may be used as often as Red Hat. When it comes to running production systems, however, Red Hat rules.

Red Hat has produced a version of Red Hat Enterprise Linux, dubbed Atomic Host, geared specifically to run Linux containers. Do we need another version of RHEL? Will containers really catch on? Will Red Hat succeed in injecting vigor into its OpenShift platform for developers through this container expertise?

We shall see. But the idea of containers addresses several issues that virtualization could not solve by itself. In the future, containers may be a second way to move workloads into the cloud when certain operating characteristics are sought, such as speed of delivery to the cloud, speed of initiation, and concentration of workloads using the same kernel on one host.

Thanks to Krishnan Subramanian, director of OpenShift strategy at Red Hat, for his comment, which appears for the time being to close out this debate over the value of containers and their future. Stay tuned. This is sure to be a topic of furture discussion.
Reply  |  Post Message  |  Messages List  |  Start a Board

Renat Khasanshryn, CEO of Altoros, in Sunnyvale, Calif., and Minsk, Belarus, sent these comments, which I'm adding them to the stream. Altoros, among other things, consults on Cloud Foundry use, so Renat pays attention to PaaS. He wrote:

"In 10 years, containers, not VMs, will sit atop of the Host OS for 50%+ of cloud-native workloads. Docker is the most "trendy", but not the most advanced container technology out there. First of all, many thanks to Red Hat and Docker for a great job popularizing containers among developers. Developers rule in this world, and will get what they want (containers).

By 2007, VMware lost the battle for the title of #1 provider of multi-tenancy solution for the hosting market. A few little known companies emerged as winners. These few companies hold the most advanced container tech out there.

Between 2000 and until today, container packaging technologies, including Docker, are facing enormous problems getting changes accepted by the upstream Linux kernel communities.


Container's future is bright; however, not without challenges

I believe containers will ultimately win over Type 2 hypervisors for cloud-native workloads, however they face some stormy winds:

Can someone tell me what SuperNAP Exec. VP of Data Center Technology Mark Thiele means when he says below, "The biggest risk to RHAT is more likely that an alternative h/w abstraction solution will arise before containers have gained a big enough foot hold to be considered the defacto solution..." What form would such hardware take? A supersized CPU, many cores, with an embedded, skeleton operating system that automatically treated every application loaded on it as a container?

I like IBM's Ric Telford's analogy. From my point of view, if you want to be light on your feet and free to move at short notice, then furnished apartments -- containers -- are for you. Also, Lew Tucker's telling comment, "sometimes having a familiar environment, even if it means bringing your own OS, may involve more work, but it's at least the work that you know," neatly sums up several pro-virtualization arguments, but he's not trying to decide the issue for the virtual machine status quo. He was quite familiar with containers as head of cloud computing for Sun, prior to becoming CTO of cloud for Cisco, and he concludes there's probably containers somewhere in the cloud's future. Well said. And Joe Emison at BuildFax continues to burn through pro-container comments with his own insight and doubts about their usefulness. Thanks, Joe. You've all made this the best informed debate I've seen on the subject.

Piston founder, CTO Joshua McKenty summarizes pros, cons of Docker containers in a set of slides, liink below in his perceptive comments. Thanks for additional light shed by Jonathan Feldman, CIO of City of Ashville, N.C., and Joe Emison, CTO of BuildFax in discussion below. Joe points out drawbacks of containers, says they favor systems admin over developers. I still lean in, Joe. Thanks to Rich Wolski, founder, CTO, Eucalyptus, who got this debate going with points on strengths/weaknesses of virfual machines vs. containers. Rich gives tip of hat to remarks by CTO Brian Stevens at Red Hat Summit, concluded Thursday. Enomaly founder in Toronto, Reuven Cohen, not too impressed with containers; he's now top tech advocate, Citrix. Glad to see TeaPartyCitizen join in and don't forget Andrew Binstock, editor of Dr. Dobb's, all below. I know there are others who want to join this debate, please do so. Ah, Alex Freedland, CEO of Mirantis, did so. Thanks!
Reply  |  Post Message  |  Messages List  |  Start a Board

Thanks for weighing in, Joe and Jonathan. Sounds like we better explore this subject with further opinion columns.
Reply  |  Post Message  |  Messages List  |  Start a Board

Ben Kepes has done the best description I've seen of the emerging Red Hat/Docker relationship in his April 15 blog on Forbes.com http://www.forbes.com/sites/benkepes/2014/04/15/red-hat-deepens-its-container-commitment-docker-front-and-center/  Too bad it's a holiday today in New Zealand. Otherwise, he'd be commenting here.

Welil, if we're going to get into labeling new implementations as old wine in new bottles, let's give credit where credit is due: virtual containers, to my knowledge, first appeared commercially on IBM mainframes. However, the historical containers have little connection to today's implementations, because today's instances are tuned to an entirely different reality: cloud computing. More specifically, the ability to deploy and migrate VMs/containers quickly, which is a concept that simply did not exist on IBM or, IIRC, on Solaris servers.

So, yes, there are historical threads, but, no, they're not the same old thing just repackaged.
Reply  |  Post Message  |  Messages List  |  Start a Board

Lorna, I think it would have to be another server operating system, one with a big presence in the data center compared to Linux. That would be Windows. Microsoft may be compelled to consider containers, due to the advantage they bestow on Linux in the cloud era. But I don't think Windows can be adapted to containerization. That's something unique to the way Linux was built and the way the kernel works, along with open source packaging. Anyone else with thoughts on this?
Reply  |  Post Message  |  Messages List  |  Start a Board

Charlie, Do you expect other network OSes to also support containers?
Reply  |  Post Message  |  Messages List  |  Start a Board
Page 1 / 2   >   >>
InformationWeek Is Getting an Upgrade!