Salesforce1 component framework helps customers build apps in a hurry, but don't confuse it with ExactTarget Journey Builder for Apps.

"Today people are building big, monolithic applications, but we wanted to enable developers to quickly assemble the right screens for the right users," Scott Holden, Salesforce.com's VP of platform marketing, told InformationWeek. "Developers can share and reuse components and even business users can drag-and-drop to create apps."

Salesforce started using Lightning internally 18 months ago as part of the Salesforce1 push. Now the company is opening up the framework to partners and customers so they can create their own components. The framework is launching with components from 25 partners who have been using the platform for roughly seven weeks. In a short time Salesforce has seen "hockey stick" growth in the development of new components, according to Holden.

"These partners are breaking apart existing apps into components that can be reused to quickly assemble new apps," he explained. "Developers working with business users can now sit down and say, 'Here's a long list of components we can draw from, so let's sit down together and assemble that new app.'"

The Lighting framework is available immediately. Lighting Builder, a drag-and-drop design environment used to assemble components into user interfaces, is currently in beta and is expected to become generally available in February. 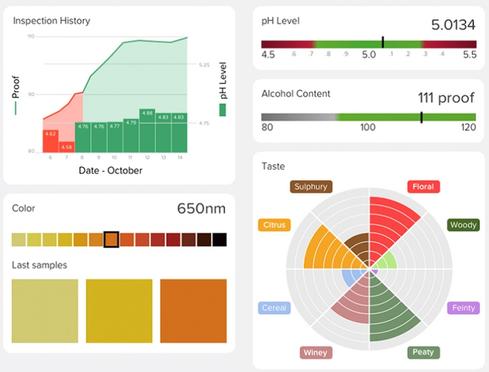 A collection of Lightning user-interface components used to assemble what looks like an interesting adult-beverage sampling application.

Why not use one of the popular JavaScript-based frameworks that have emerged for mobile app development?

"The Lightning Framework isn't just for UIs; It's tied into our workflow, security, and analytics engines and all of our other services, so we had to build it ourselves," said Holden. He added that Lighting has been open sourced under the name Aura and that it's possible to add custom components using JavaScript.

Salesforce1 Lightning is not to be confused with ExactTarget Journey Builder for Apps, which was released last month. The latter is a mobile development platform designed for building consumer-facing (B2C) apps, and it runs on the Java-based Heroku cloud platform. Lightning is geared to employee- and partner-facing business-to-business (B2B) apps running on Salesforce1.

The need for separate mobile app development platforms underscores divides that persist behind the scenes at Salesforce.com. ExactTarget, which Salesforce.com acquired for $2.5 billion in 2013 to serve as the centerpiece of its Marketing Cloud, runs on Microsoft SQL Server, a choice reaffirmed in May as part of a strategic alliance with Microsoft. The rest of Salesforce runs on Oracle Database and middleware. Thus, two separate mobile app development platforms were required.

These differences have been a point of attack for Salesforce competitors such as Oracle, which earlier this month at Oracle OpenWorld made a show of offering its customers "the same platform that Oracle itself uses for developing and extending cloud-based apps."

Aside from the speed it promises in building new apps, the best news where Salesforce1 Lightning is concerned is that it's included in the cost of using Salesforce.com apps.

Doug Henschen is Executive Editor of InformationWeek, where he covers the intersection of enterprise applications with information management, business intelligence, big data and analytics. He previously served as editor in chief of Intelligent Enterprise, editor in chief of ... View Full Bio
We welcome your comments on this topic on our social media channels, or [contact us directly] with questions about the site.
Comment  |
Email This  |
Print  |
RSS
More Insights
Webcasts
The Failures of Static DLP and How to Protect Against Tomorrow's Email Breaches
ROI and Beyond for the Cloud
More Webcasts
White Papers
Two-Factor Evaluation Guide
ROI Study: Economic Validation Report of the Anomali Threat Intelligence Platform
More White Papers
Reports
Building an Effective Cybersecurity Incident Response Team
Special Report: The Changing Face of Threat Intelligence
More Reports

Many companies need to extend their Salesforce.com CRM systems with new apps that support unique and differentiating processes across the enterprise.

Building upon these rapid apps development and deployment capabilities, the AgileInfoways Salesforce Connector allows developers to instantly communicate with standard or custom objects in their company's Salesforce.com instance, enabling out-of-the-box, bi-directional integration between the CRM and mobile apps development. As a result, agileinfoways  gives Salesforce.com customers the flexibility of an open standards platform that seamlessly integrates with their existing Salesforce.com architecture.
Reply  |  Post Message  |  Messages List  |  Start a Board

To: Media relations
From: Marketing

The Salesforce.com press release about Lightning didn't mention Journey Builder for Apps. I guess they think we're all suffering from amnesia and can't remember that the latter was announced just a few weeks ago. The release did say Lightning is something for "employee- and partner-facing apps," but I wonder if they would have even pointed out that they have a separate, Journey Builder option for consumer apps had I not asked?