To help IoT devices work together and enable a new class of IoT apps and services, Samsung introduces a cloud service that aims to break down silos.

Samsung is expanding its ARTIK Internet of Things platform with a cloud computing component, a move that underscores its effort to recast itself as a software company.

At the Samsung Developer Conference in San Francisco on Wednesday, the company introduced the Samsung ARTIK Cloud, a cloud-based backend design to run IoT applications and services.

"Our motto is 'make connections, not silos,'" said Curtis Sasaki, VP of ecosystems and IoT general manager at Samsung Strategy and Innovation Center.

ARTIK Cloud represents an effort to allow the notoriously fragmented set of IoT devices work together. Sasaki suggested it could help IoT mean "the interoperability of things."

The platform is open in the sense that it can communicate with devices from a variety of vendors through protocols like REST/HTTP, Websockets, MQTT, and CoAP. It's supported by an assortment of tools and services, including a new ARTIK IDE (to write device code), resin.io (for automatic device updating), a Rules Engine (for crafting conditional actions), and eyeSight Technologies' computer vision capabilities. Partners like Legrand and Digibe Software provide paths to connect enterprise systems. 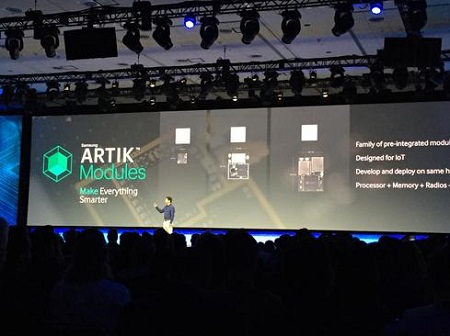 DJ Koh, president of mobile communications at Samsung, said that the number of devices on the Internet has surpassed the number of people in the world, and that by 2020 there will be 21 billion connected devices.

These devices "will be all around us in almost everything we touch and use," said Koh.

What's more, these devices will run on software. Samsung wants developers to help it provide that software, so much so that it now describes itself not as a hardware company but as a software company.

"We've changed from a hardware company to a software company," said Injong Rhee, executive VP and head of research and development for Samsung's software and services group.

That's a bit of a stretch, given that Samsung's homegrown operating system, Tizen, despite having surpassed BlackBerry in Q3 2015 sales, is still only the fourth largest mobile OS, behind Android, iOS, and Windows Phone, according to Strategy Analytics.

Though Rhee insisted Tizen has benefits, like its low memory footprint, he also noted that about 80% of the world's smartphones run Android. After Android and iOS, the remaining mobile operating systems together account for just 2% of the market, according to CCS Insights.

However, Samsung sold 21 million Tizen-based Smart TVs last year. The company expects Tizen to power its home appliances, audio, and wearables. Maybe Microsoft, which is third in the smartphone OS race, should worry.

Beyond mobile operating systems, Samsung's software aspirations sound more credible. Samsung Pay has about 5 million users, about the same as Android Pay, according to Bloomberg. Apple Pay has more users, about 12 million, but Samsung Pay works on a more merchant hardware.

While Samsung may talk about itself as a software company, it's more like a more relaxed version of Apple, a company at the intersection of hardware and software. Its KNOX enterprise security technology, for example, depends on tying hardware to software.

Samsung isn't so much a software company as a company interested in connecting software and hardware. As BK Yoon, president and CEO of Samsung Electronics, put it in a statement, "The launch of ARTIK Cloud is extremely exciting because it promises to not only help Samsung connect our diverse portfolio of products, but also enable other companies to participate in a growing IoT ecosystem."

Like Amazon, Apple, Google, and Microsoft, Samsung wants to be the mediator and gatekeeper that helps connect software-enabled devices. That's where the money is.

Thomas Claburn has been writing about business and technology since 1996, for publications such as New Architect, PC Computing, InformationWeek, Salon, Wired, and Ziff Davis Smart Business. Before that, he worked in film and television, having earned a not particularly useful ... View Full Bio
We welcome your comments on this topic on our social media channels, or [contact us directly] with questions about the site.
Comment  |
Email This  |
Print  |
RSS
More Insights
Webcasts
Key technology trends in 2021 - Making these technologies work for your business
People Are The Most Important Part of Autonomous SOC
More Webcasts
White Papers
Why Add Security to Your Skill Set and How to Do It
Definitive Guide to Endpoint Privilege Management
More White Papers
Reports
2021 Top Enterprise IT Trends - Network Computing
The Malware Threat Landscape
More Reports