BSA|The Software Alliance has issued its first report looking beyond GDP and direct employment statistics to estimate the direct and indirect ways the software industry influences the US economy.

When it comes to assessing how a given industry influences the US economy, the most common metrics look at how many jobs are directly supported by the sector, and how much revenue is contributed to the nation's Gross Domestic Product via the sale of goods and services. Such metrics only tell part of the story.

In a new report, "The Economic Impact of Software," BSA|The Software Alliance attempts to go beyond GDP and direct jobs to consider indirect, but very real, ways in which the software industry is aiding the US economy.

The report, released June 15, found that the software industry directly contributed $475.3 billion to the US economy in 2014, with an additional $594.7 billion indirectly contributed in the same year through factors such as tangential jobs creation, consumer spending by software industry employees, and investment by the industry in research and development (R&D). The report incorporates analysis conducted by The Economist Intelligence Unit (EIU) using publicly available government data.

[What does the BSA have to say about software audits? Read: Software Licensing Audits: Is Your Company Prepared?]

The definition of the "software industry" used in the study reflects the sector's transformation from a focus on tangible and packaged software products to one that includes software-related services, such as cloud-based Software-as-a-Service (SaaS), cloud storage and computing, mobile app development, and app hosting. 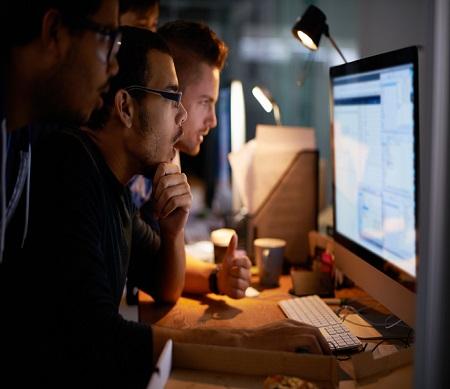 According to the report, the software industry directly employed 2.5 million people in the US in 2014. However, the industry's influence on employment is far-reaching, according to the report, which counted another 7.3 million jobs supporting the sector in 2014. The report considers web designers, futurists, project coordinators, administrative assistants, and accountants as among the many job functions supported by the software industry in the US.

Average annual salaries were also considered. For example, in 2014 the average annual salary for a fulltime software developer in the US was $108,760, more than twice the national average of $48,320. "Not only does software support millions of good (read 'white collar') jobs, but these are great paying jobs too," the report stated.

According to the report, software companies invested $52 billion in R&D in 2012, representing 17.2% of all domestic business R&D for the year (the most recent statistics available).

The report also breaks down the economic influence of the software industry in all 50 states. California, New York, Texas, Washington, and Virginia were the five states in which the sector had the greatest economic influence in 2014.

Table 1: 10 States Benefitting Most From The Software Industry

Wyoming, Alaska, and North Dakota were the states in which the software industry had the least economic impact. Even so, according to the report, "Every state's economy and workforce are benefiting from new jobs that fit our modern digital economy."

BSA, which previously stood for the Business Software Alliance, was renamed BSA|The Software Alliance in October 2012. Its member companies include Apple, IBM, Microsoft, Oracle, Salesforce, and other commercial software companies. The group was formed to call attention to the influence of the software industry on the US economy and to lobby the government on behalf of the industry.

Charles Babcock is an editor-at-large for InformationWeek and author of Management Strategies for the Cloud Revolution, a McGraw-Hill book. He is the former editor-in-chief of Digital News, former software editor of Computerworld and former technology editor of Interactive ... View Full Bio
We welcome your comments on this topic on our social media channels, or [contact us directly] with questions about the site.
Comment  |
Email This  |
Print  |
RSS
More Insights
Webcasts
Building the SOC of the Future: Next-Generation Security Operations
ROI and Beyond for the Cloud
More Webcasts
White Papers
2020 Cybersecurity Report Card
2020 SANS Enterprise Cloud Incident Response Survey
More White Papers
Reports
2021 Top Enterprise IT Trends
IDC FutureScape: Worldwide Digital Transformation Predictions
More Reports

Many societies can and will produce excellent software but American business culture probably has an edge with its embrace of rapid change and frequent updates, and possibly its somewhat more free-wheeling nature. But don't expect any advantage to last forever.
Reply  |  Post Message  |  Messages List  |  Start a Board
Editors' Choice
Hot Topics