CloudAXIS product due out in 2013 will extend videoconferences to include Skype, Facebook, and GoogleTalk users.
David F Carr
Editor, InformationWeek Government/Healthcare
October 08, 2012

6 Ways iPhone 5, iOS 6 Amp Up Social Opportunities
(click image for larger view and for slideshow
With cloud-based videoconferencing options on the rise, Polycom announced its own cloud play, which will take advantage of the consumerization of video, allowing anyone with a browser to take part in a corporate video call.

Delivered as an extension of the Polycom RealPresence platform, the CloudAXIS suite will be available to corporate customers for deployment on their own servers in early 2013 and will enter trials with service providers at the same time, the company said. The cloud extension provides a unified presence directory linked to Skype, GoogleTalk, Facebook, and other services that make it possible to see who is online and available. CloudAXIS is not a bridging service that would allow a Skype user to participate from within the Skype client. Rather, Polycom is tapping the presence and instant messaging systems of Skype and other consumer services as an invitation channel, then directing participants to its own browser-based video client.

"It uses standards-based presence technology, XMPP, to suck in presence from other applications, and we're aggregating it into one user interface," Jim Kruger, senior VP of product marketing, said in an interview. "I can drag and drop your name into my window, click connect, and a link will be sent to you by IM in Skype. Once you click to connect, you will be automatically joined into the call." However, instead of connecting over Skype, "you'd be coming in over a secure Polycom-grade, enterprise-grade connection," he said.

While defending the value of its own technology, Polycom also wants to "make sure customers get the broadest reach available," Kruger said.

Polycom also is embracing the SVC protocol and shifting its technical emphasis from hardware to software. Much of this comes in response to competitive pressures. Polycom stock was recently downgraded by UBS Securities, which cited the uncertainties created by the corporate and technological transitions Polycom must make.

Videoconferencing through a browser, rather than a separate software client, is becoming more practical because of advances in HTML5 and an emerging realtime communications standard, WebRTC. In anticipation of Polycom's announcement, a cloud startup that is challenging the need for proprietary videoconferencing equipment from vendors like Polycom, Blue Jeans Network, issued a statement claiming that it has already captured 10% of the market for videoconferencing services. Blue Jeans cited Wainhouse Research as the source of that market data and credited the introduction of a WebRTC browser-based client as one reason it saw a 50% increase in customer adoption in the last three months. Another startup, TenHands, has a WebRTC client in beta and says it will offer basic business videoconferencing for free.

Because browsers are just starting to implement WebRTC and the standard itself is not fully baked, a plugin is still typically required. Polycom's browser client is not based on WebRTC, but Kruger said the standard will be relevant to the goal of universal access in the long run. "We're not announcing anything today," he said. 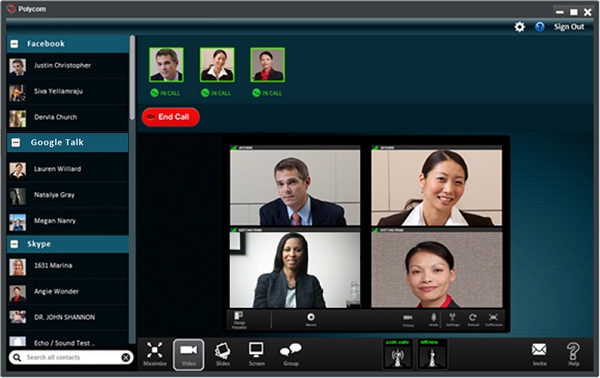 CloudAXIS allows Polycom users to invite participants who use other videoconferencing products such as Skype.

Polycom also is responding to the proliferation of cloud options for bridging between videoconferencing services, including a free one from Vidyo.

CloudAXIS was one of several new products Polycom announced Monday, along with software upgrades to support its version of scalable video coding (SVC), a videoconferencing protocol Vidyo has exploited to deliver high performance at a low price. With SVC, Polycom customers will be able to get three times their current port capacity or call capacity on the same equipment. Polycom says its version is the first "standards-based" implementation of SVC, because it is delivered as an extension to the more widely used advanced video coding (AVC) H.264 standard.

"Our solution is 100% natively interoperable with AVC, which means there are no gateways, no services need to subscribe to, no complications whatsoever," Kruger said.

In addition to providing software upgrades to its multipoint control unit (MCU) hardware--the equipment that mixes video streams and controls video calls--Polycom also will be introducing its first software-based MCU, which can be run on a standard server or virtualized.

In a statement for the press release, Wainhouse Research analyst Ira M. Weinstein said he was impressed by all the ways Polycom is making video conferencing easier. "Make no mistake--we are seeing Polycom 2.0," he said.