Yes, very much so. There are two discussions there. There is MySQL as exists now as a relational database in Web and enterprise settings. There is also a relatively new project called Drizzle -- a fork of MySQL -- which is a very cloud-oriented so the name is appropriate I suppose. If you go to a place like Facebook and see how MySQL gets used, people only use a subset of the relational capabilities because it has a horizontal scale and there are all these concerns that go into large-scale deployments. So Drizzle sort of strips back down to a small core and then builds up the distributed capabilities. 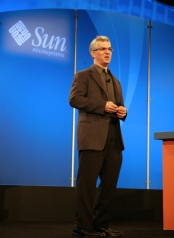 InformationWeek: With Marten Mikos leaving, who had a strong vision for Sun's open source strategies, how big a hole does this create?

Marten is a great guy, but he is a builder. He didn't start MySQL but he made it into a company. I don't know if I would identify him as the visionary around open source, but he's very much a leader and visionary around exploring the business models that couple open source with commercial businesses. We will certainly miss his wisdom around that. But we have lots of ideas and lots of other prototypes of products for connecting to commercial stuff. For instance, how GlassFish has evolved in different ways. Virtual Box is another interesting one, along with the Java environment itself. For me one of the lasting contributions that MySQL culturally brought to Sun is the idea of making things very simple for developers to get going on. MySQL has this concept called the 15 Minute Rule. That rule says that from the time someone clicks download on the Web site to when they are running their first queries, it should take 15 minutes total. That's including download time and install. We have taken that philosophy and are driving it to other areas.