The President of the United States answered questions on the website, which slowed under the heavy load.
Thomas Claburn
Editor at Large, Enterprise Mobility
August 29, 2012
If you stopped by Reddit, the popular online discussion site on Wednesday around 4:30 p.m. EDT, you might have seen this message: "reddit is under heavy load right now, sorry. Try again in a few minutes." 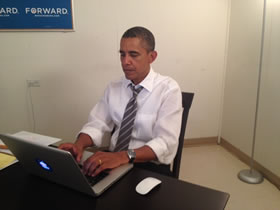