From "SaaS promotes shadow IT" to "SaaS saves time and money," an InformationWeek survey finds that it's time to retire some old saws.

The software-as-a-service (SaaS) market has come a long way. Or has it? Some myths persist despite years of evolution in SaaS adoption and deployment patterns.

What are some of those popular myths that just won't go away? On-premises vendors have helped keep the "SaaS is for simple apps" and "SaaS is for small companies" myths alive. Then there's the SaaS-advocate claim that cloud saves time and money. Many agree, but in our InformationWeek SaaS Innovation Survey, conducted in August among 300 qualified business technology professionals, we discovered some dissenters even among SaaS users.

[Want more on this report? Read SaaS as Innovation Driver.]

Here, then, are five SaaS myths that should be put to rest. 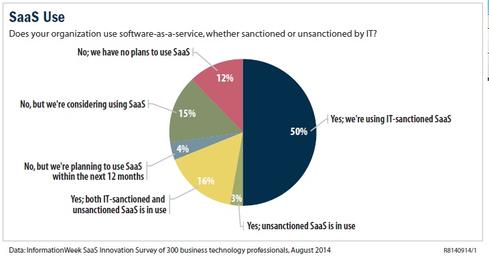 2. SaaS naysayers use security as an excuse.
Whether it's perception or reality, 22% of respondents who have no plans to use SaaS agree with the statement that it's "not secure enough." But the number-one reason for not using SaaS, cited by 38% of respondents with no cloud plans, is "no business need," while 27% agree with the statement, "Internally hosted applications better meet our users' needs."

Security risks -- whether perceived or real -- aren't just "an excuse" for some, as 16% of respondents not using SaaS say they are "restricted [from using SaaS] by regulation." Many European countries, for instance, have local-data-

Can you name names of services that have sent emails about having lost three weeks (or even one day) of data? Sounds like a SaaS service that our readers would want to avoid.
Reply  |  Post Message  |  Messages List  |  Start a Board

Right - the real benefits are good for IT, not so great for software companies used to selling the application for a large upfront cost and collecting ongoing income for maintenance.
Reply  |  Post Message  |  Messages List  |  Start a Board

The people have spoken (through our survey) and it sounds like they're not worried. Only 37 out of 300 respondents said their firms don't use and absolutely will not use SaaS. That doesn't seem to indicate there are a lot of worrywarts. I think a lot of the myths here -- like, SaaS is for simple apps and small companies and isn't secure -- are kept alive by on-premises vendors and integrators trying to keep their businesses alive by spreading FUD.
Reply  |  Post Message  |  Messages List  |  Start a Board

Are people becoming more worried they will get in trouble regarding SaaS apps? I haven't heard that from people.
Reply  |  Post Message  |  Messages List  |  Start a Board
InformationWeek Is Getting an Upgrade!