When the Apple Watch debuts next month, among the first enterprise application vendors ready with native apps will be Salesforce, which announced this week it will have a Salesforce Analytics Cloud App and a Salesforce1 mobile app developed specifically for the tiny wrist-based interface.

So what can you do from the Apple Watch that wasn't already supported on the iPhone, which has to be nearby to support the apps and give the wrist-based device connectivity to the Internet? The short answer is nothing, but there are things that you might find easier or more polite to consume information from the watch.

"You're going to be able to get things like immediate notifications on simple yes/no decision," Peter Coffee, Salesforce vice president for Strategic Research, told InformationWeek in a phone interview. "If there's a request to offer a discount to a customer, for example, you're not going to need to pull out your phone and constantly look to see if that request has been approved. The watch will flash that notification, you can glance at it, and just continue the conversation without breaking the flow."

Apple is clearly a complementary device to the iPhone, but wrist-based interaction might make more sense when you're on the go or in a conversation or a meeting, so can be more discreet about checking on information. In the case of the Salesforce1 app, a salesperson can see an upcoming appointment on the watch, tap on that link and then drill down on how many open service cases that company has, how many open deals it has right now, and what's the projected value of those deals? In the case of the Analytics Cloud App, users will be able to tap on a bar chart or KPI that they follow and quickly drill down deeper data by customer or territory.

"It may seem unlikely to people who are used to needing a master-of-the-universe three-screen display to get anything done, but if you look at how well Apple has engineered the Taptic engine for the watch, I think they'll be pleasantly surprised how much they get done on the watch before they have to go to a device as large as the phone," said Coffee. 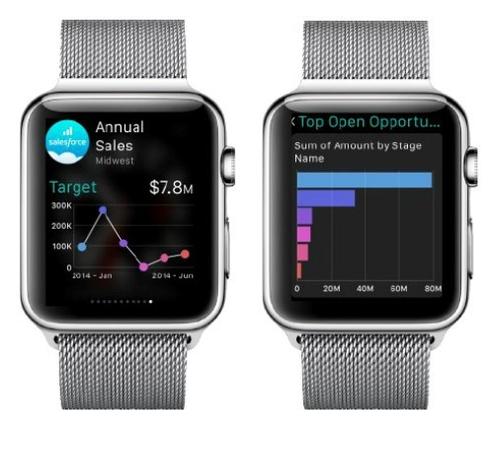 Salesforce Analytics Cloud Apple Watch app users will be able to drill down on favorite charts and KPIs.

Individuals will be able to create customized choices of a few questions they want to see on their Apple Watch, and companies will be able to roll out dashboards to all salespeople, for example, surfacing key customer indicators.

"If you're trying to sell a customer something and they have a really big, red bar on service cases, one tap would let quickly drill in to find out how many have been open for more than 30 days, so you can be informed with current data before you go into that conversation," said Coffee. 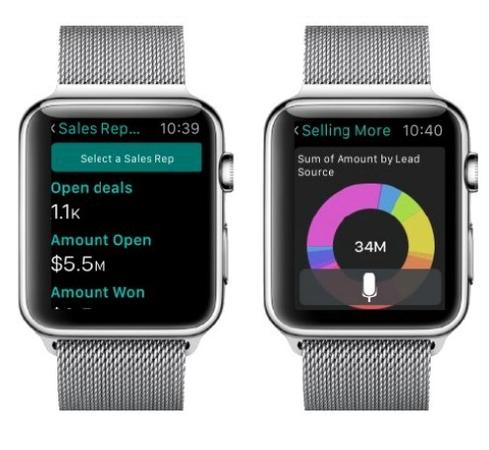 Saleforce1 Mobile apps for Apple Watch will let salespeople see and drill down on timely insights for upcoming sales calls.

The Salesforce apps were featured in Monday's presentations by Apple in large part because Salesforce was early to jump on the Apple Watch bandwagon. Last June the company launched its Salesforce Wear development platform for wearables devices starting with Google Glass and the Samsung Gear 2 Smartwatch, and it subsequently added support for the Apple Watch, as well as Epson Moverio augmented-reality smart glasses, the Jawbone UP activity-tracking wristband, Meta Glasses augmented-reality 3D smart glasses, the Oculus Rift virtual reality 3D headset, and Vuzix M100 Smart Glasses.

The Salesforce Wear Developer Pack is already available for developing custom native Apple Watch applications. "It's not just being able to build apps quickly for particular devices," said Coffee of the development platform. "We're providing reference applications for all these devices, but if you build them in this environment, you're data is curated in an environment that's proven to be have high-availability, high-scalability, and a high degree of trust and on data-privileges, management, and protection."

Doug Henschen is Executive Editor of InformationWeek, where he covers the intersection of enterprise applications with information management, business intelligence, big data and analytics. He previously served as editor in chief of Intelligent Enterprise, editor in chief of ... View Full Bio
We welcome your comments on this topic on our social media channels, or [contact us directly] with questions about the site.
Comment  |
Email This  |
Print  |
RSS
More Insights
Webcasts
People Are The Most Important Part of Autonomous SOC
Nip Ransomware in the FUD: Detecting Attacks Pre-Encryption
More Webcasts
White Papers
How to Build Your Incident Response Plan
Tech Insights: Detecting and Preventing Insider Data Leaks
More White Papers
Reports
Protection Strategies for a Cyber-Resilient Organization
Building the SOC of the Future
More Reports

If you visit the home page for the Salessforce Wear platform, you'll find more details on what you can develop using the Apple Watch Dev Pack, as well as a video on sample screens: 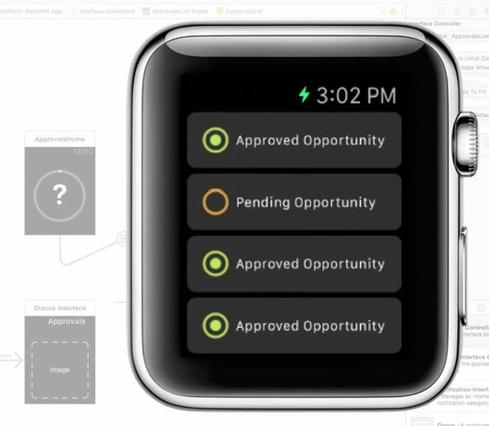 I'm still not entirely sure that the Apple Watch is going to be something I could really use. I think a smartphone is enough for me. However, we all know how Apple is capable of creating products that no one ever knew that they needed, so its really hard to gague this right now.
Reply  |  Post Message  |  Messages List  |  Start a Board

Personally, I think the Apple Watch has so much potential in the business world and around the office. My only concern is about security. MDM and EMM software solutions have adapted to Iphones and Ipads being used around the office but I'm not sure how they will adapt to new wearable technology. It's great that Salesforce has jumped on this bandwagon so fast but if there is no way to guaruntee security for business data- who is going to take the chance and access that information through an unprotected watch? There are many MDM and EMM software solutions that have been very succesful like Airwatch, Good Technology and Bushel (www.bushel.com). But will they keep up with the growing wearable technology?
Reply  |  Post Message  |  Messages List  |  Start a Board

I am really hoping a third party will come out with a wrist strap that adds some of the fitness sensors that apple left off of this. An onboard GPS, barometer/altimeter, body temp would be a great start with the ability to track sleep. Think a fit bit type device with its own battery that stays on at night while the watch charges. Of course it would wirelessly connect to the apple watch with its own app and really improve this as a fitness device, where it has really failed to deliver. Who wants to run 5 miles with their phone on them to get GPS?
Reply  |  Post Message  |  Messages List  |  Start a Board
Editors' Choice
Hot Topics