Platform-as-a-service is changing along with the rise of next-generation applications, but is Docker crucial? Interop panelists debate.

Virtual machines and Docker Linux containers are changing the way applications are run, architected, developed, and deployed. During a panel I moderated at Interop 2014 in New York Tuesday, spokesmen for leading platform-as-a-service suppliers addressed the question of how next-generation applications are changing PaaS.

Platform-as-a-service is the combination of tools, code workflow, change management, and code libraries that are provided as a shared service through a PaaS system.

The session kicked off with each panelist answering the question: What is a next-generation application? Their descriptions broadly overlapped: Next-generation applications are more likely to be composed by teams working on a PaaS system than by talented developers working alone or in pairs, the panel agreed. They are composite applications built up from independent, modular services. In some cases these might be micro-services, each running in its own Linux container and tied together by the middleware and network connections supplied by the development system. Next-generation applications are often written in one of the dynamic languages, such as Ruby, Python, PHP, or Node.js. And they are portable across different infrastructures, such as different brands of cloud.

All of that sounded like a tall order. In the interest of a lively discussion, I asked each panelist whether their PaaS system meets all of those demands. Meadows, Subramanian, and Smithurst answered, "yes," with qualifications, for Engine Yard, Open Shift, and Stackato, respectively. "No," answered Russinovich, saying there were still too many gaps and unfulfilled functions to match all the requirements. The latter was the more honest answer, I said, stepping out of my neutral moderator's role momentarily to take sides. 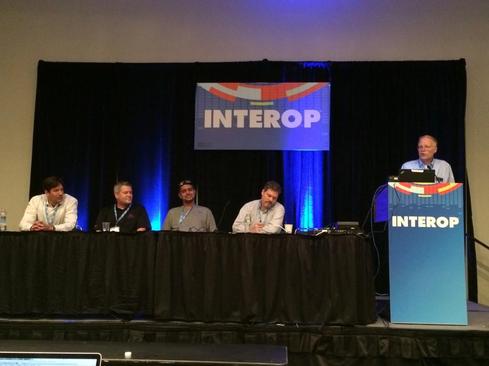 Several speakers had mentioned Linux containers, so the panel discussed whether a workload file formatting and packaging system is essential to PaaS. The ease of deployment and the portability gained for the workload make containers an essential part of PaaS, the panelists agreed. That included Russinovich, although Microsoft's Azure PaaS does not currently support Docker containers. But containers can run on Azure infrastructure-as-a-service inside a Hyper-V virtual machine.

In an interview before the panel convened, Russinovich mentioned an engineering partnership with Docker that's been underway for several months. He also noted Microsoft's early participation in the Kubernetes container orchestration project, founded by Google, as a sign of Microsoft's interest in Linux containers. Russinovich didn't say so directly, but my interpretation is that Microsoft appears to be moving toward direct support of Docker on its Azure PaaS in the near future.

Russinovich also noted that Microsoft has developed its own Windows container system for its internal operations which imposes greater security and isolation in container operation. The system is called DrawBridge, he said.

All four panelists agreed that PaaS would have to become a platform for app configuration management and deployment as well as development, and doing so would push it toward becoming the system that helps the IT staff move toward closer cooperation between development and IT operations.

In moving closer to DevOps, PaaS will also make greater use of open source code modules like the configuration and deployment managers Puppet, Chef, and SaltStack, and the Jenkins continuous integration server. Engine Yard is a firm supporter of open source, said Meadows. ActiveState's Stackato is based on the open source Cloud Foundry system, Smithurst said. And Red Hat is one of the world's largest companies basing its existence on creating and selling open source subscriptions.

Russinovich, noting Microsoft's history as a strongly proprietary company, said his firm has been selective in its support of open source code in the past. But Azure PaaS users should look for it to liberalize its acceptance in future products. It currently supports use of open source Python, PHP, and Java on its PaaS, Russinovich said.

In introducing the overall Cloud Applications workshop, chair Bernard Golden, VP of strategy for ActiveState Software, cited Marc Andreessen's comment that "software is eating the world" in establishing the importance of next-generation applications. But platforms on which to build them have suffered a variety of fates, with few owning a commanding view of the marketplace. AppFog was acquired by CenturyLink in mid-June for an undisclosed -- but considered to be low -- price. CloudBees recently dropped its runtime PaaS, [email protected], to focus on a phase of DevOps: continuous integration. Salesforce.com bought Heroku for $212 million in 2011, a figure later declared to be "a false positive" that has not been repeated with other PaaS startups.

Meanwhile, the two open source PaaS systems, Cloud Foundry, which is productized by Pivotal as Pivotal CF and by ActiveState in Stackato, and OpenShift, a Red Hat product, continue to move in competing ways toward broader developer use. Cloud Foundry works to provide fuller Docker support, while enjoying backing from a wide variety of companies. Red Hat's Open Shift, early to market with Docker support, is looking for a way to broaden its list of official company backers.

PaaS is becoming increasingly important as the need for software applications grows in an economy that is more and more dependent on software. PaaS suppliers are bringing different languages, workflows, and systems to produce those applications and extending their reach in the direction of DevOps. They still have functions to provide and gaps to fill, but over the next few months one or more of these PaaS platforms is likely to gain traction and become a springboard to a next generation of applications.

Charles Babcock is an editor-at-large for InformationWeek and author of Management Strategies for the Cloud Revolution, a McGraw-Hill book. He is the former editor-in-chief of Digital News, former software editor of Computerworld and former technology editor of Interactive ... View Full Bio
We welcome your comments on this topic on our social media channels, or [contact us directly] with questions about the site.
Comment  |
Email This  |
Print  |
RSS
More Insights
Webcasts
Fintech at SaaS speed: Navigating the scale & security challenge
Monitoring Critical Cloud Workloads
More Webcasts
White Papers
How DevOps Delivers on User Experience with Observability
VPN Risk Report
More White Papers
Reports
2021 Digital Transformation Report
Are We Cyber-Resilient? The Key Question Every Organization Must Answer
More Reports