Microsoft and SAP announced Monday that a range of SAP applications have been certified to run in Microsoft's Azure cloud. The long-time partners also announced new ties between SAP BusinessObjects and Microsoft Office and expanded joint options for mobile support.

The biggest news is clearly the availability of SAP apps in Microsoft's cloud. SAP Business Suite applications and SAP Business All-In-One for small and midsized businesses are expected to be available for deployment on Azure by the end of June. The partners are promising elastic deployment using an SAP Cloud Appliance Library tool that can deploy a variety of virtual application configurations.

"Customers can deploy these applications into Azure knowing that the configurations are tested, certified, and supported by SAP," said Microsoft's Takeshi Numoto, corporate VP of cloud, enterprise marketing, in a phone interview with InformationWeek. "They can take advantage of the flexibility and agility that cloud computing provides where you can spool up and down resources as needed and only pay for what you use."

The database service options for running on Azure will include SAP Adaptive Server Enterprise (formerly Sybase ASE) and Microsoft SQL Server 2012. SAP is not yet certified on Microsoft SQL Server 2014, which is no surprise given that the latest version of Microsoft's flagship database was released in April. But it's somewhat surprising that only the developer edition of SAP's flagship in-memory database, SAP Hana, will be made available this summer.

"This relationship around Azure is a stepping stone to many more solutions to come, and this is just the first wave," SAP's Kevin Ichhpurani, senior VP and head of business development, told InformationWeek. He was hinting that Hana will eventually support production deployments on Azure, but he declined to provide any forecast on what month, quarter, or even year that might happen.

That's a contrast with an unprecedented Oracle-Microsoft partnership, announced last summer and introduced at Oracle Open World, through which Oracle applications and the flagship Oracle 12c Database are now available on Azure.

Microsoft and SAP were also cagey about when SAP apps might be certified on SQL Server 2014. That upgrade is not an in-memory database, as Hana is, but it does offer an in-memory OLTP option that lets users run specific indexes in memory to dramatically speed data-intensive applications. 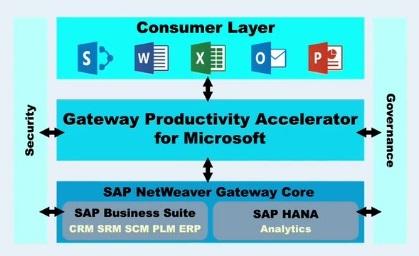 The SAP Gateway for Microsoft now extends data access from the Office suite, including Excel, into BusinessObjects Universe data models.

"This will empower the casual users because they can get at the data on the fly, as opposed to using the multiple [import] steps that were previously required," said Ichhpurani.

On the mobility front, SAP has 13 applications available that support Windows Mobile 8.1 and Windows Phone 8.1, and it announced that the SAP Mobile Platform -- which includes SAP Unwired middleware, Afaria for security, and the Syclo mobile apps platform -- will support the same operating systems by June. The development platform lets you build applications once and deploy to any supported mobile device, and the list will now include a range of Windows and Windows Phone devices.

Doug Henschen is Executive Editor of InformationWeek, where he covers the intersection of enterprise applications with information management, business intelligence, big data and analytics. He previously served as editor in chief of Intelligent Enterprise, editor in chief of ... View Full Bio
We welcome your comments on this topic on our social media channels, or [contact us directly] with questions about the site.
Comment  |
Email This  |
Print  |
RSS
More Insights
Webcasts
Making XDR Work in Your Enterprise - May 12
How the Rapid Shift to Remote Work Impacted IT Complexity and Post-Pandemic Security Priorities
More Webcasts
White Papers
Enabling Enterprise Resiliency Through Cyberthreat Detection
Sunburst: Impact and Timeline
More White Papers
Reports
Intelligent Outcomes Are Key to Business Resilience
Dark Reading Report: Battle for the Endpoint
More Reports

Enhterprise applications will become cloud applications when users pay for what they use, not what they have a long term license for. This SAP move to the cloud is an interim step.
Reply  |  Post Message  |  Messages List  |  Start a Board

So what is the development version of Hana, which is available on Azure, running on? Considering that app vendors Oracle and Infor are also running on Azure, this seems more about catoring to the growing percentage of SAP customers running on Windows (rather than addressing any shortcomings of SAP's own cloud platform). I hear rought estimates that 50%+ of SAP customers run Oracle database, 20%+ IBM DB2, and 15%+ run SQL Server. Can anybody verify?
Reply  |  Post Message  |  Messages List  |  Start a Board

Between SAPs apps and Microsoft's Azure cloud, there are probably just too many variables and too few "proven configurations" to roll out Hana-based app deployments at this point. Why else would SAP not make this available? It will be interesting to see Microsoft and Oracle highlighting SAP customers taking advantage of their in-memory capablities (available in SQL Server 2014 and yet to be added to Oracle 12c).
Reply  |  Post Message  |  Messages List  |  Start a Board
InformationWeek Is Getting an Upgrade!