Microsoft pre-announced a slew of important new features for its cloud-based Power BI service in December, but on Tuesday, with the formal launch of the public preview, the company announced even bigger news: Power BI is becoming a stand-alone freemium service intended for massive adoption.

"We've had tens of thousands of organizations sign up for Power BI, but we want to open up the floodgates," said James Phillips, general manager of Microsoft Business Intelligence, in a phone interview with InformationWeek. "We believe this service should be in the hands of every business user, so it's becoming a stand-alone SaaS analytics service with zero prerequisites."

Power BI was formerly offered to Office365 subscribers and priced from $20 to $52 per user, per month. Now the service will have its own site, and any user with an email address will be able to sign up for a free tier of service with up to 1 gigabyte of data storage and support for up to 10,000 rows of streaming data per hour. A paid Power BI Pro upgrade will cost $9.99 per user, per month and provide 10 gigabytes of storage, support for up to 1 million rows of streaming data per hour, Active Directory-controlled collaboration, and on-premises data-access capabilities.

Phillips drew parallels between Microsoft Power BI and IBM Watson Analytics in that both are freemium services aimed at individual users. But Microsoft is undercutting IBM's service with more storage capacity and a paid service that's one third the cost of Watson Analytics' $30 per user, per month. What's more, Microsoft is offering built-in connection options to popular third-party cloud applications, including Salesforce, Marketo, Zendesk, and GitHub, and it's supporting streaming data services. 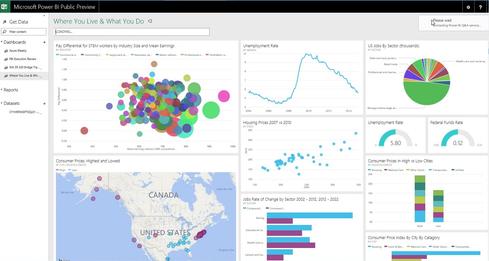 "Users will be able to dig into data from third-party sources like Salesforce and, within minutes, build real-time dashboards that will update automatically," said Phillips. "If you look at IBM Watson Analytics, you'd have to go to Salesforce as a business user, negotiate their APIs, extract data, shape it into a CSV file, upload, and hope the service is able to extract something that wasn’t obvious, and then I'd have to repeat that for every update, because it's not a live connection."

In another move that will ripple through BI market, which is now universally armed with data-visualization options, Microsoft is undercutting Tableau Software and others with Power BI Designer, a desktop/laptop visualization tool that's freely downloadable from the Power BI site. Designed for use alongside Microsoft Excel, Power BI Designer gives users a tool to create visual charts and reports that can be published and shared from the Power BI service

Other new features now in public preview include:

Mobile tablet and phone apps: A native iPad app is now available in the Apple store, and Microsoft says an iPhone app will be available within a month. Android and Windows will gain "Universal" native apps capable of running across multiple form factors.

Live connectivity to SQL Server and third-party data sources: Power BI Pro users get self-service data access to SQL Server instances exposed by IT and to third-party, cloud-accessible systems such as Salesforce from a "Get Data" page. There's no need for IT assistance to access data, according to Microsoft, and connections will support real-time streaming data.

Microsoft was not prepared to say when the public preview will end or how Power BI offerings to Office 365 users will change. There's no doubt these moves will shake up the market for cloud-based BI options while also throwing down very direct challenges to both IBM Watson Analytics and Tableau Software.

Doug Henschen is Executive Editor of InformationWeek, where he covers the intersection of enterprise applications with information management, business intelligence, big data and analytics. He previously served as editor in chief of Intelligent Enterprise, editor in chief of ... View Full Bio
We welcome your comments on this topic on our social media channels, or [contact us directly] with questions about the site.
Comment  |
Email This  |
Print  |
RSS
More Insights
Webcasts
Protecting Your Enterprise's Intellectual Property
Strategies for Success with Digital Transformation
More Webcasts
White Papers
Improving Your Enterprise's Protection With Cyber Resilience
5 Steps to Zero Trust in the Data Center
More White Papers
Reports
The Drive for Shift-Left Performance Testing
Special Report: The Changing Face of Threat Intelligence
More Reports

I'm afraid you didn't read very carefully. It's starts with a service that's entirely free with 1GB of storage. The paid teir doen't "start at" $9.99, that's the price, period. So it is "freemium," just as described in the comparsion to the free tier/paid tier IBM Watson Analytics.
Reply  |  Post Message  |  Messages List  |  Start a Board

Tantazling, but as usual, the name of the game is the monthly expenditure to use the service.  The entry level $9.99/mo. does not sound  FREE to me so the name "freemium," while catchy, just does not apply.
Reply  |  Post Message  |  Messages List  |  Start a Board
Editors' Choice
Hot Topics