Microsoft on Thursday announced robust financials for its fiscal first quarter, with sales that beat Wall Street estimates by more than $1 billion. Revenue hit $23.2 billion, a 25% year-over-year increase. Earnings fell 13% to $4.454 billion, however, due to charges related to Microsoft's acquisition of Nokia's device business.

With Microsoft still an afterthought in the smartphone market, the "cloud" part of CEO Satya Nadella's "mobile first, cloud first" strategy unsurprisingly produced more promising sales. But though some of Microsoft's troubles persist, at least one recent weak point unexpectedly became an asset -- Surface revenue was up almost 130%.

What other surprises did Microsoft's Q1 contain, and what do they mean for the company as it barrels toward Windows 10? Here are seven highlights from Microsoft's strong quarter.

1. The Surface line finally turned a profit. Sort of.
Propelled by relatively strong demand for the Surface Pro 3, Microsoft's tablet line hit $908 million in revenue during the company's Q1, which ended September 30. Microsoft's reported cost of revenue was only $802 million, which means Surfaces finally posted a favorable gross margin. Microsoft doesn't report granular marketing and R&D expenses, so it's not clear whether Surfaces are profitable overall -- but the line has some a long, long way from the near-$1 billion write-down it forced Microsoft to take over 15 months ago.

Progress is relative, of course. Among premium notebooks, Macbooks comfortably outsell the Surface Pro 3. If you think of the Surface as an expensive tablet, the comparison gets even worse, as Apple, despite being in a bit of a tablet sales slump, sold more than 12 million iPads in its recent quarter.

Nevertheless, the Surface line has finally begun to justify itself. CEO Satya Nadella recently said he remains committed to the Surface Pro line, and Microsoft reps have dropped high-level references to a coming Surface Pro 4 with the same dimensions as the current model. Now that the company's earnings are out, it's easy to see why Nadella decided to continue betting on Surface. CFO Amy Hood said during the company's earnings call that she expects Surface sales to grow in Q2. 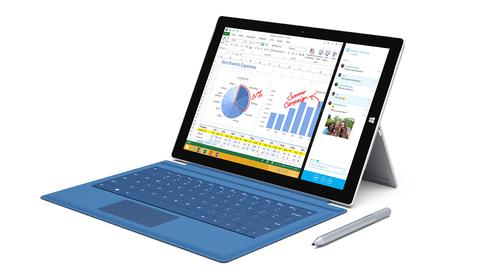 2. Cloud revenue is way up.
Compared to Q1 2013, Microsoft's commercial cloud revenue (which includes Azure, Dynamics CRM, and enterprise versions of Office 365) rose 128% in the most recent quarter. Microsoft's cloud revenue represents less than 10% of the company's overall business, but Nadella is shifting priorities to place Azure at the center of the company's plans, with traditional cash cow Windows relegated to a more supporting role. As such, the consistent growth of Microsoft's cloud portfolio is encouraging.

3. Consumers continue to adopt Office 365.
Microsoft made much of its cloud progress with enterprise products, but the mainstream version of Office 365, arguably the company's biggest cloud play for consumers, enjoyed a strong quarter as well. Office 365 Home and Personal now boast 7 million subscribers, or 25% more than last quarter.

4. Windows Phone is messy but could be worse.
For Microsoft's Q1, the addition of Nokia was something of a double-edged sword. The company sold 9.3 million Lumia smartphones in the quarter and took in more than $2.6 billion in phone hardware revenue, giving it a gross margin of almost $500 million. True, compared to Android's ubiquity and

Crypto researchers are claiming that Microsoft has deliberately weakened its disk encryption in Windows 8. I wonder why.
Reply  |  Post Message  |  Messages List  |  Start a Board
InformationWeek Is Getting an Upgrade!