Firefox's plan to deliver sponsored content to new users may clash with its company manifesto.

Mozilla plans to offer advertising space within Firefox to a select group of partners, the company said Tuesday, a move that may restore relations with the advertising industry and allow for new sources of revenue.

Mozilla refers to Firefox's newly commercialized browser real estate as Directory Tiles, nine rectangles, arranged three-by-three, that display reduced representations of recently visited websites when a user opens a new browser tab. When Firefox is first installed, the user has no browsing history, so the Directory Tiles are blank.

Nor is it delivering any value for Mozilla, which, as Herman said a week ago, needs additional revenue to continue growing and to keep up with the evolving Web.

The potential value is considerable. In response to a series of emailed questions, Herman said that the desktop version of Firefox generates over 100 billion tile exposures annually, an undisclosed percentage of which will go to Directory Tiles. 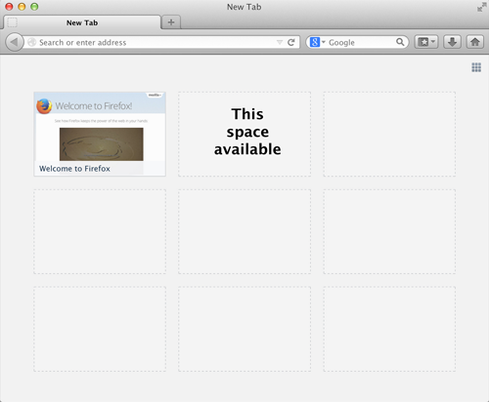 Last year, Mozilla drew the ire of the online advertising industry when it announced plans to begin blocking third-party cookies by default. Randall Rothenberg, president and CEO of the Interactive Advertising Bureau, denounced the idea and Mozilla, saying that the company has been "implacably opposed to advertising for years" and that it has been the primary purveyor of the financially damaging Adblock Plus browser add-on.

The ad industry's discontent appears to have made Mozilla more conciliatory toward promotional content. Mozilla backed away from its cookie-blocking plan. And now the emergence of Directory Tiles looks like an olive branch.

Asked whether this new initiative represents an effort to improve relations with the advertising industry, Herman said, "the Directory Tiles project was created because we see it as an opportunity to enhance our user experience, with our mission in mind. We also see a tremendous opportunity for content partnerships -- which might include some content coming from advertisers -- but many other content sources as well. We are encouraged by the response we have received so far from the industry."

Mozilla plans to populate these tiles with a mix of Mozilla projects, websites popular in the user's geographic area, and, as Herman put it, "sponsored content from hand-picked partners to help support Mozilla's pursuit of our mission."

Mozilla's mission, however, may not be completely compatible with the mission of advertising. Two of the principles the company cites in its manifesto clash with online advertising practices.

Mozilla's manifesto says, "Individuals must have the ability to shape the Internet and their own experiences on the Internet."

This suggests Firefox users should not see any content, ads or otherwise, that they have not chosen to see.

The manifesto also states, "Individuals' security and privacy on the Internet are fundamental and must not be treated as optional."

Advertising, however, has the potential to compromise security and privacy, through malicious ads and user tracking. The ad industry's success in tracking people makes it possible for retailers to know when a pregnant woman is in her second trimester and for the National Security Agency to identify potential targets for hacking.

Nonetheless, Herman argues Directory Tiles will be consistent with Mozilla's avowed values. "True to Mozilla's mission, we are pushing our content partners to think about unique ways to deliver experiences that add value to the user experience," he said. "We know that the Internet as a whole has not pushed this agenda and it's earned a bad reputation. We are going to uphold our standards and experiment with different types of formats and executions. Not all content is advertising and we expect that to be a significant difference to what we enable. We are looking for content partners, not advertising-only partners."

Jonathan Mayer, a graduate student in computer science and law at Stanford University who worked previously on the Do Not Track initiative and on Mozilla's Cookie Clearinghouse, said in an email that while he hadn't reviewed Mozilla's plan in detail, his initial impression is that the plan is tone deaf.

Others posting comments online have expressed similar sentiments, but some see Directory Tiles as a positive step. "I like the look of this new feature -- I think it will be more useful to beginning users, it produces a nicer first-run user experience, and it gets out of the way very quickly," said software developer Chris Morgan in a post to Hacker News.

The details are still being worked out. Mozilla intends to seek community feedback about whether to extend its Directory Tiles content initiative beyond new Firefox installations to include longstanding Firefox users who have cleared their browser cookies. The company also hasn't yet determined whether any Firefox default settings will need to be altered to enable Directory Tiles.

Thomas Claburn has been writing about business and technology since 1996, for publications such as New Architect, PC Computing, InformationWeek, Salon, Wired, and Ziff Davis Smart Business. Before that, he worked in film and television, having earned a not particularly useful ... View Full Bio
We welcome your comments on this topic on our social media channels, or [contact us directly] with questions about the site.
Comment  |
Email This  |
Print  |
RSS
More Insights
Webcasts
Unifying Your Endpoint Security Strategy
Managing Your Enterprise Collaboration Platforms
More Webcasts
White Papers
Preparing an Endpoint Security Strategy to Address Ransomware
Formulating a Robust Pivoting Methodology
More White Papers
Reports
Privileged Access Management Checklist
The Infoblox Q1 2021 Cyberthreat Intelligence Report
More Reports

Mozilla's plan looks fairly unobtrusive, and if it helps the company regain its relevance through greater funding and visibility, it's a price worth paying.
Reply  |  Post Message  |  Messages List  |  Start a Board

People hate ads, but they're a necessary evil. Mozilla's placement of their ads doesn't bother me; I rarely use that homepage to navigate as it is.
Reply  |  Post Message  |  Messages List  |  Start a Board
InformationWeek Is Getting an Upgrade!