Oracle president Mark Hurd threw verbal rose petals at the feet of customers during his keynote talk at the InformationWeek Conference on Tuesday, while giving competitors SAP and Rimini Street the thorns.

Hurd hit on Oracle's cloud and engineered systems strengths, as is typical in his public appearances, but he also broke new ground in response to questions from InformationWeek editor-in-chief Rob Preston on the difficulty Oracle customers have in dealing with just one person, due to the company's 80-plus acquisitions over the past six years.

"The customer-facing piece is the biggest issue that we've had, but we believe that the people who represent Oracle have to know their products," Hurd said. "When I got to the company three or four years ago, we didn't have single accountability for accounts, but we've put in nearly 300 [account directors] from almost nil three years ago."

This new role is part of a team that includes the account director, an architect, an executive sponsor (who reports to Hurd or a level below him), and a support director. 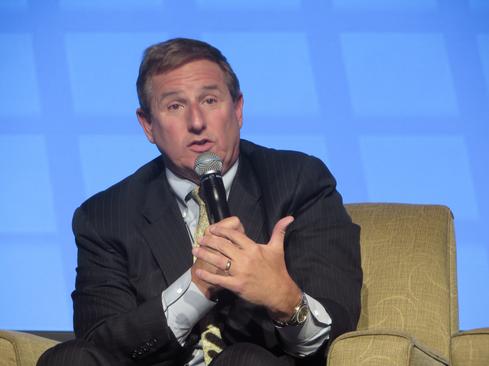 As for changing what InformationWeek's Preston described as Oracle's "tough, sales-oriented culture," Hurd pushed back a bit, saying he's trying to lead the way toward a "kinder, gentler" Oracle. "I think that some of these characterizations of our reputation are broad generalizations," he said. But rather than just being about being nice to do business with, Hurd added, "I'm more interested in customers getting the best of everything that Oracle can offer. We can help you save money, we can help you innovate, and we want to bring all of our capabilities to the table. The issue that's first at hand for us now is to get our people in a position where we can help you strategically."

Competitors get thorns
Asked about various competitive threats, Hurd talked up Oracle's multi-tenant and coming in-memory capabilities in Oracle Database 12c, and he disparaged the potential impact of SAP customers switching to that vendor's Hana in-memory platform. "As a percent of our overall database business, a very tiny percent of it would sit below an SAP ERP," Hurd said, adding an estimate of "less than 5%."

That figure sounds surprisingly low, given that SAP has hundreds of thousands of customers, with some 60% estimated to be using Oracle database.

Hurd turned the tables on SAP, questioning its strategy of going after the database business, since enterprise applications -- SAP's core business -- are moving toward cloud computing. "The opportunity for us to become the leading applications company in the world is based on the fact that we've become the leader in the cloud. If I was the other company, I'd be very focused on getting my applications to the cloud. If you don't, strategically in years to come it's going to be tough times."

In another shot at a competitor, Hurd bristled at a question about third-party support providers and Oracle financial stats that show it added $932 million in software license update and support revenues in 2013 while spending approximately $50 million less in operating expenses on that category, year over year.

Questioning the ability of third-party vendors to offer software patches, Hurd said, "There are court cases on this right now," alluding to the suit Oracle has pending against Rimini Street. "When you pay Oracle for support, it covers subscription and support, so you get the right to future versions of the software as part of that. You would have to include our R&D number, as well as look at the cost of support, to get an integrated view of that ecosystem."

Hurd closed his comments by commiserating with CIOs. "I know there's a lot of pressure on you, and being CIO is the hardest job in the world," he said. "You have to have one foot in the business world and one foot in the technology world. Whether it comes off soft or nice, it's more important that we come help you with ideas, and that's a job we have to get better at every day."

Doug Henschen is Executive Editor of InformationWeek, where he covers the intersection of enterprise applications with information management, business intelligence, big data and analytics. He previously served as editor in chief of Intelligent Enterprise, editor in chief of ... View Full Bio
We welcome your comments on this topic on our social media channels, or [contact us directly] with questions about the site.
Comment  |
Email This  |
Print  |
RSS
More Insights
Webcasts
Emerging Security Threats Your Enterprise Should Be Aware Of
Why Performance Testing is More Critical Today
More Webcasts
White Papers
Wi-Fi 6: The (Much) Bigger Story
2020 Trends to Watch: Cybersecurity
More White Papers
Reports
The New Face of IT Automation
State of Cybersecurity Incident Response
More Reports

Yes - HANA does real-time analytics - bring data from many sources and structures (including text, machine streams) and do real-time processing in one store on it. BW on HANA, HANA + Hadoop (check out new smart data acess) are use cases for it. Its a good place for many customers to start with a HANA project, delivers solid improvements on performance (+ HANA is amazing on the latest Ivy bridge 3x higher performance than Westmere).

However, the real reason for HANA is enabling the real-time business by erasing the OLTP+OLAP divide - somebody has to over reach to shake the industry, and it wont be the database incumbants who are gettign disrupted. With HANA you can analyze data as it is being captured (fresh vs old batch data), at interactive speed (i.e.google the data and follow your thought process), do deep simulations (e.g. MRP, often in DB predictive analytics with external data added in)  and here is the biggie - the data footprint is 37-50x smaller as you get rid of all material aggregates, joins, secondary indices and more. also app development and management is easier. These are amazing properties to take to the cloud - as cloud is all about simplicity, instant transactions & analysis and is always-on.

The facts are that suite on HANA is here with many live customers already, many LOB applications like S&OP on HANA and industry applications like Fraud Management in Financial Services built natively on HANA are here already (dont get the facts behind Mark's 2020 comment - did you fact check it? On the other hand from riducling cloud to doing a 180 turn and embracing it, customers and industry watchers have a long memory!)

Thanks a lot for the complementary to me, gentleman. I agree that the competition will happen at higher application level in SaaS instead of underlying stack. Right now it's hard to predict how Oracle will perform but I think the end user will benefit from the competition.
Reply  |  Post Message  |  Messages List  |  Start a Board

The surprise is Hurd being pretty open in saying they have to work to do on this problem of disjointed, multi-contact cusotmer relationships. It also wasn't a surprise to hear Hurd slamming competitors, but I happen to agree with him that the battle with SAP will be over cloud-based app agility, not tech choices deep in the stack.

Hana's best play with SAP customers is in analytics -- as the underpinning of SAP BW. Hasso Plattner and Vishal Sikka are overreaching in thinking they can displace Oracle, DB2 and Microsoft SQL Server in the transactional realm. I get the feeling (reading insider comments here and there) that sensible Jim Hagemann-Snabe got fed up with the twisted priorities and decided to get out.
Reply  |  Post Message  |  Messages List  |  Start a Board

The presentation from Oracle CEO is of no surprise - the customer is the king and all big vendors take arduous effort in entertaining the customer. I agree on one key point - to achieve better customer satisfaction, we need to have single accountability. The account team should be on top of the issue to streamline the support pipe.
Reply  |  Post Message  |  Messages List  |  Start a Board
Editors' Choice
Hot Topics