Larry Ellison kicked off this week's Oracle OpenWorld 2014 extravaganza in San Francisco on Sunday night declaring that Oracle has reached a cloud inflection point in 2014.

His list of claims was long, noting that Oracle is delivering "by far the largest" software-as-a-service apps portfolio, a "massively upgraded" platform-as-a-service featuring Oracle Database 12c, and a focus on cloud-infrastructure security, availability, and cost-of-ownership through which it will go toe-to-toe with Amazon, Microsoft, Google, "or any other cloud platform provider."

It was vintage Larry Ellison, complete with plentiful claims of market superiority, several laugh-inducing barbs slung at Salesforce.com, SAP, and Workday, and the familiar feeling that you've heard these claims before. For the first time in his 37-year history with Oracle, Ellison was speaking as Executive Chairman and CTO, having recently handed his CEO title to Safra Catz and Mark Hurd. But there was no difference in Ellison's approach, focusing, as always, on technology, products, and competitors.

In the human resources market, Ellison said Oracle has long been the cloud leader in talent management (thanks to its 2012 acquisition of Taleo) but over the last two quarters, he said, Fusion HCM has become the largest-selling cloud-based human capital management system, ahead of SAP and Workday offerings.

"The reason we're selling more core HCM than anybody else is that ours is tightly coupled with our social tools," he said. "Of course you have to do payroll and benefits, but that's table stakes. Modern HCM has to enable employees to communicate quickly and clearly, so we have all the tools for social HCM." 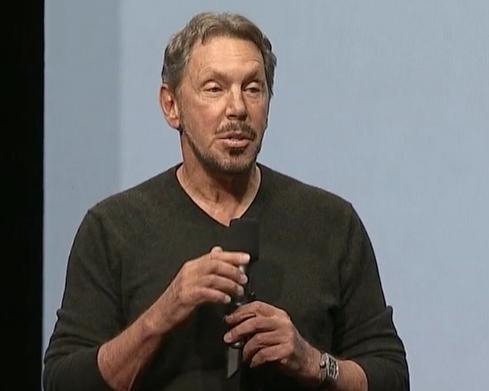 Declaring ERP to be the third and coming wave in cloud applications, Ellison said Oracle is the first company selling cloud-based ERP to midmarket and high-end companies (a distinction Workday would surely contest). He said Oracle now offers financial-management, project-management, and procurement apps in the cloud and is the "first-mover" into supply-chain-management in the cloud.

Familiar promises, pointed barbs
Ellison's platform-as-a-service claims sounded familiar, in part because he announced the company's PaaS ambitions at Oracle OpenWorld 2012, and he announced the first services, around Java middleware and Oracle Database services, at Oracle OpenWorld 2013. The upgraded PaaS launched in September features improvements including the Oracle Database In-Memory option, introduced in June, which promises faster performance, as well as social- and mobile-enablement services. Customers can move their apps and services from their own data centers to Oracle's cloud "with the push of a button, and without changing a line of code," he vowed.

Ellison distinguished Oracle as "the only cloud vendor that lets you use the same platform it builds on to extend cloud apps." That's a contrast with Salesforce.com, which, he said, "uses Oracle's platform" to build its apps while relegating customers to extending apps with its "proprietary" Force.com and Salesforce1 platforms. Ellison hastened to add that "Salesforce is the best of the rest because at least they have a platform. The other guys -- Workday -- they don't even have a platform. It's missing in action."

Ellison said he would "try to be nice" about SAP, but then confessed: "I have no idea what runs on Hana, but it ain't your cloud. It's rude, but it's the truth. Hana powers the cloud? What cloud? Where? Let's just talk about Earth."

Ellison wrapped up his keynote with a laundry list of Engineered Systems news, including:

As cloud-focused as Ellison made Oracle sound, the numbers from the company's most recent quarterly report seem at odds with the "inflection point" claim. The lion's share, 53% of revenue, came from on-premises software license updates and support, 17% came from new software licenses, just 3% came from SaaS and Pass, and 1% came from infrastructure-as-a-service.

Oracle has come a long way in developing its SaaS, PaaS, and IaaS offerings, but Ellison's final assessment -- that Oracle is "just getting started" in the cloud -- could just as easily be a statement about how far it has to go before it's, first and foremost, a cloud computing vendor.

Doug Henschen is Executive Editor of InformationWeek, where he covers the intersection of enterprise applications with information management, business intelligence, big data and analytics. He previously served as editor in chief of Intelligent Enterprise, editor in chief of ... View Full Bio
We welcome your comments on this topic on our social media channels, or [contact us directly] with questions about the site.
Comment  |
Email This  |
Print  |
RSS
More Insights
Webcasts
People Are The Most Important Part of Autonomous SOC
Nip Ransomware in the FUD: Detecting Attacks Pre-Encryption
More Webcasts
White Papers
How a Trading Floor Continues its Operations During COVID-19 Lockdown
A Business Case for Vulnerability Remediation Orchestration
More White Papers
Reports
Intelligent Outcomes Are Key to Business Resilience
Building an Effective Cybersecurity Incident Response Team
More Reports

Oracle calls IaaS a "low-margin, commodity business" that it plays in out of necessity. It needs to have IaaS, but it's focused on SaaS and PaaS. Many doubt is can actually go head to head on cost versus AWS. Oracle says it now has 19 cloud data centers in eight contries with a total storage capacity of 400 petabytes. No doubt AWS is bigger.
Reply  |  Post Message  |  Messages List  |  Start a Board

Oracle in its own way has staged a remarkable revamp and offers a rich selection of online applications. But to call itself the supreme company in cloud computing requires a redefinition of what the term means. I wasn't able to agree with Oracle's early anti-cloud statements; I think I'll reserve judgement on pro-cloud claims of supremacy. My head is still spinning from the U-turn Larry executed.
Reply  |  Post Message  |  Messages List  |  Start a Board

I'll believe that when Oracle has many data centers as Amazon.
Reply  |  Post Message  |  Messages List  |  Start a Board
Editors' Choice
Hot Topics