Salesforce plans to buy Quip, a startup focused on mobile document management. The deal puts Salesforce in a position to better compete with productivity platforms Google Drive and Microsoft Office 365.

The cloud-based startup will cost Salesforce about $582 million in stock, the CRM giant reported. This does not include previous investments Salesforce Ventures had made in Quip, which were not shared in the filing.

However, some sources put the total price at $750 million. This figure comes from TechCrunch, which cites two sources "very close to the deal."

[Is HPE thinking about going private? Some reports are saying yes.]

Quip was founded in 2012 by former Facebook CTO Bret Taylor and Kevin Gibbs, who had previously worked in Google's infrastructure group, reported The Wall Street Journal. The startup had raised $46 million in venture funding.

Quip's mobile-friendly productivity platform aims to change the way people collaborate so that they don't have to rely on email. The idea is to let users create and manage documents together with built-in chat capabilities.

A "Smart Inbox" lets users manage current documents, and chat is built into all documents and spreadsheets for quick messaging. Users can have one-on-one personal chats with team members, receive instant updates with smart notifications, and enter items into documents with @mentions.

While Quip has a desktop app and web version, its user interface is designed to be mobile-friendly so that users can continue working on the go from their smartphones and tablets.

In a blog post on the acquisition, cofounders Taylor and Gibbs commented on the software philosophy Salesforce and Quip share. The two companies believe software should be in the cloud, inherently social, and built for mobile use.

"As part of Salesforce, we will be able to expand our service more quickly and reach millions of people all over the world," they wrote. "And, we'll be able to extend the Salesforce Customer Success Platform in powerful new ways with our next-generation productivity capabilities," they continued, noting the power of mixing data, content, and communication.

Salesforce CEO Marc Benioff confirmed on Twitter that both Taylor and Gibbs will stay with Quip. The Quip team has also committed to expanding Quip's productivity platform as part of Salesforce. He noted that current customers will continue to receive its products and services. 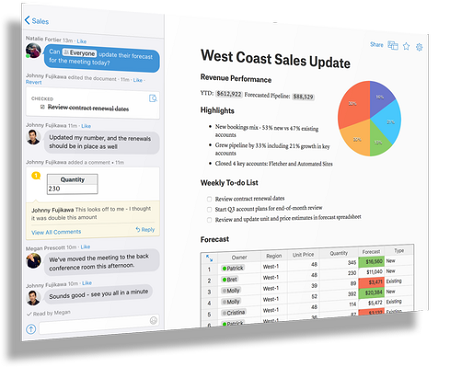 The acquisition of Quip puts Salesforce in a position to better compete with productivity platforms Google Drive and Microsoft Office 365, whose companies are also trying to position them for the future of mobile work.

Salesforce has been browsing acquisitions over the past few months. In June, the company paid $2.8 billion to buy Demandware, a purchase that strengthened its position as a leader in customer resource management that adds an e-commerce capability that Salesforce previously lacked.

While Salesforce also collaborates with Microsoft, this acquisition will give the company a boost to compete with Redmond. Prior to its acquisition of Demandware, Salesforce had also made a bid for LinkedIn, which was ultimately acquired by Microsoft for a hefty $26.2 billion. Benioff confirmed the bid, Re/code reported.

Kelly Sheridan is the Staff Editor at Dark Reading, where she focuses on cybersecurity news and analysis. She is a business technology journalist who previously reported for InformationWeek, where she covered Microsoft, and Insurance & Technology, where she covered financial ... View Full Bio
We welcome your comments on this topic on our social media channels, or [contact us directly] with questions about the site.
Comment  |
Email This  |
Print  |
RSS
More Insights
Webcasts
Monitoring Critical Cloud Workloads
Disaster Recovery/Business Continuity in the New Normal
More Webcasts
White Papers
The State of Malware Threats
Bandura Threat Intel Integrations Infographic
More White Papers
Reports
Future Proofing Your Network for 5G
[Tech Insights] SASE's Pandemic Boost Likely to Stick
More Reports