Dreamforce mixes Hillary Clinton, will.i.am, The Beach Boys, and philanthropy with a smattering of new-product news and customer testimonials. Is it really a tech event?

SAN FRANCISCO — "We're here to excite you, entertain you, educate you, inspire you, and motivate you today!" bellowed Salesforce.com CEO Marc Benioff on Tuesday, kicking off his main keynote at Dreamforce 2014. He delivered on all counts, though sometimes it was tough to connect the entertaining and inspiring parts with sales, service, and marketing technology.

Some tech events mix a dollop of entertainment in with the business at hand, just to lighten the mood and keep the audience fresh. Dreamforce flips that formula on its head. They periodically pause from the cultural confab to remind attendees -- IT, sales, service, marketing, and other tech-savvy business people -- why they paid for those conference fees, hotel bills, plane tickets, and restaurant tabs.

Yes, Dreamforce offers "more than 1,400 expert-led sessions," but the main-stage proceedings could pass for a mainstream event. Tuesday morning's keynotes, for example, began with a chat with World Economic Forum founder Klaus Schwab (one of Benioff's mentors), followed by a speech and follow-up interview with former Secretary of State (and former Senator and former First Lady) Hillary Clinton.

Clinton's remarks were thoughtful and, thankfully for Salesforce, surprisingly apolitical. I've heard rumblings from some Salesforce insiders that the company is catching grief from conservative customers for featuring Clinton, former veep and environmentalist Al Gore, and liberal media magnate Arianna Huffington all at the same event. 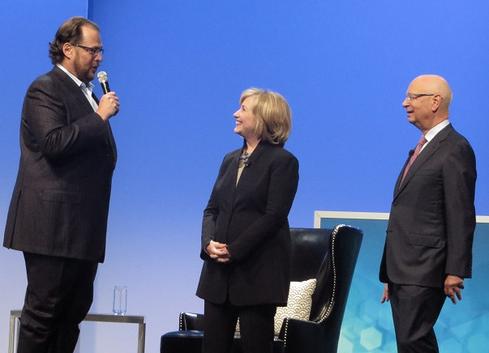 Even the afternoon keynote took a while to get around to technology. First, attendees were entertained by a scantily-clad traditional Hawaiian dance troup, followed by a Hawaiian shaman and troubadour of sorts, followed by The Beach Boys -- yes, THE Beach Boys -- singing "Fun, Fun, Fun."

It's pretty apparent that Dreamforce is Benioff's annual Hollywood-producer moment, and each year he tries to top himself. As The Beach Boys closed their first number, Benioff drew a laugh when he said, "The Beach Boys! Who'd have thought? ... Well, I guess I did."

This bit was followed by the annual Dreamforce Salesforce Foundation discussion, highlighting the latest recipients of Salesforce.com's 1% of employee time, 1% of profits, and 1% of services donated to non-profits philanthropy model. Here, San Francisco's mayor, its school superintendent, and a prominent principal thanked Benioff, a native son of this city, for donating $5 million to the San Francisco Unified School District.

Next will.i.am, the lead singer of hip hop band the Black Eyed Peas, shared a funny and touching account of what it was like to grow up in a poor school district in the Bay area. This philanthropic discussion naturally led to another Beach Boys song, "Good Vibrations."

It was nearly 2:00 p.m. before Benioff finally got to the meat of Salesforce.com's big tech announcements of Dreamforce 2014:

We've covered each of these announcements (linked above), but Benioff, Alex Dayon, president of products, and Parker Harris, Salesforce co-founder, wove in use-case examples and first-hand accounts from beta customers of these new products.

In a video segment, executives of GE Finance couldn't find enough good things to say about Wave. The superlatives included "disruptive, revolutionary, simple, fast, game-changer," and "the future." Keep in mind, however, that GE was reportedly involved in the design of Wave, so there might be a bit of one-handed clapping in there.

Coca-Cola Germany, the Berlin-based bottling unit of Coke, sang the praises of Salesforce1 Lightning, which was used this year to turn formerly cumbersome, paper-based sales and distribution processes into slick smartphone and tablet apps. Now the company is entirely mobile, and speed of execution has improved throughout the business as a result, said CEO Ulrik Nehammer, who was there in person.

It's apparently not possible to talk to a German executive without hearing about SAP at some point. In this case Benioff asked Nehammer why Coke chose Salesforce.com for the mobile app support when it's also a long-time SAP customer.

"We're using SAP for the back office, and the choice of Salesforce for the front office was quite simple," Nehammer said. "We traveled around the world, we came to you with our team in February, and just look at what has been delivered in a very short time. It's fantastic."

Indeed, "speed is the new currency of business," as Benioff put it -- more than two hours earlier at the start of the keynote. It's ironic that Benioff sets records for the length of his keynotes. And at four-days long, Dreamforce is no quick, in-and-out event. But when Benioff's on stage, you can count on being entertained. No boring techno babble here. In fact, it's the cultural event of the season.

Doug Henschen is Executive Editor of InformationWeek, where he covers the intersection of enterprise applications with information management, business intelligence, big data and analytics. He previously served as editor in chief of Intelligent Enterprise, editor in chief of ... View Full Bio
We welcome your comments on this topic on our social media channels, or [contact us directly] with questions about the site.
Comment  |
Email This  |
Print  |
RSS
More Insights
Webcasts
Securing and Monitoring Networks in the 'New Normal'
Making Cybersecurity Work in Small and Medium-Sized Businesses
More Webcasts
White Papers
The Essential Guide to Securing Remote Access
IDC Workbook: Best Practices for Cloud Security
More White Papers
Reports
The State of Threat Detection and Response
Building an Effective Cybersecurity Incident Response Team
More Reports

Wednesday was wall-to-wall technology on both the Keynote stages and in the 1,000+ techy, product-oriented breakout sessions. On Thursday Neil Young and Al Gore are among the guests, so I gotta wonder if it's back to off-topic topics. Variety is the spice of life, but the keynote balance is a bit more non-tech than usual this year.
Reply  |  Post Message  |  Messages List  |  Start a Board

I don't get the point of having political figures like Hillary Clinton at a technology conference.

For one thing, I'm sure it is super expensive to bring someone like that in.

For another, do people really want this kind of stuff at an event for the use and development of Salesforce as a platform? I thought that was the entire point of Dreamforce, but then again, maybe I am confused.
Reply  |  Post Message  |  Messages List  |  Start a Board

That's an interesting description of a Dreamforce day. Benioff is a large and commanding prescence on the stage and powerful motivational speaker. Still, if I had come 3,000 miles to Dreamforce, I'd want my motivation to be assumed and would look for in-depth technical information. Not sure what someone from Boston, for example, would get out of the San Francisco school district officials thanking Benioff for a donation. Maybe this series should just be called "Friends."
Reply  |  Post Message  |  Messages List  |  Start a Board