SAP expects its cloud business to reach 7.5 to 8.0 billion Euros ($8.6 billion to $9.2 billion) by 2020, and it will do so with the help of a next-generation ERP suite called S4 Hana, announced CEO Bill McDermott in an earnings call on Tuesday.

"We expect to grow our cloud business 7X," said McDermott, noting the starting point of 1.1 billion Euros ($1.3 billion) in 2014. "Whether you call it sevenfold or seven times, it's a lot. And we see the organic growth implied in this projection as being totally unmatched for a company of our size and scale in the industry."

Indeed, the higher end of that target would put SAP just shy of the $10 billion in revenue Salesforce has long said it will reach by the end of the decade. Some financial analysts now say Salesforce may hit that run rate by 2019. McDermott did not say whether additional acquisitions would be required to reach these ambitious targets. SAP most recently paid $8.3 billion to acquire cloud-based travel-expense-management firm Concur, and it paid $4.3 billion to acquire the cloud-based Ariba business network.

S4 Hana is based on SAP's in-memory database, app-development, and cloud platform, which has been the cornerstone of the company's strategy since 2010.

"Only SAP can deliver the promise of the perfect integrated, real-time, Hana-enabled enterprise, and that's why we really believe we're on to something big with S4 Hana," said McDermott. "The 'S' is for simple, the '4' is for fourth generation, and the suite running on Hana."

S4 Hana is clearly a bundled collection of modernized and cloud-based apps SAP has refactored and introduced in recent quarters. He said Hana would simplify the apps and ensure low total cost of ownership while the user interfaces will be "Fiori-ized," a reference to the vendor's most modern and mobile-friendly applications. More details on S4 are to be revealed during a formal announcement in New York on Feb. 3.

Noting his 50th quarter with company, McDermott said SAP has "never been in stronger position," so he said the company could confidently maintain a 30% annual cloud growth rate over the next five years while maintaining healthy profits, though it cut its profit outlook and abandoned margin forecasts. 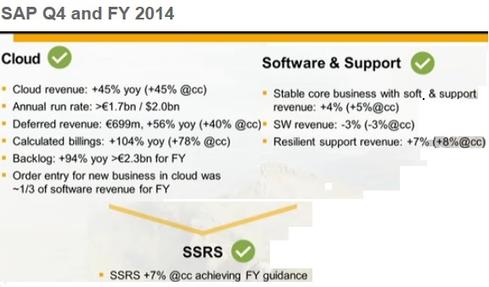 Breaking out results regionally, cloud revenue grew 58% year over year in Europe, the Middle East and Africa, with the U.K. posting the most robust growth. In the Americas, cloud growth was 39% on the year, despite some weak macroeconomics in Latin America. In the Asia-Pacific market, cloud revenue increased 59% on the year, with notable strength in India.

SAP's software and software-related services grew 7% year-over-year worldwide in 2014, in line with estimates. Software revenue declined 3%, hit in part by shortfalls in Russia, Brazil, and Mexico, all of which have been hard hit by declining oil prices, while Russia is also beset by economic sanctions tied to the crisis in Ukraine.

SAP executives said the company will reach a tipping point by 2018 wherein cloud revenues will surpass conventional software license revenues. At that point the scale of the cloud business and its recurring revenues will fuel profitability. As one sign of progress toward that goal, McDermott said SAP already has 1,850 customers running SAP's Business Suite on Hana, "more than double the number of customers Workday has globally."

Despite competitive threats from Salesforce, Oracle, and Workday, and economic conditions that financial analysts described as "choppy" and "uncertain" at best, McDermott exuded confidence and said SAP is "very carefully" providing "performance guardrails" that Wall Street can count on for 2015 and the next five years.

SAP apparently thought it would dazzle with this 7X cloud growth forecast by 2020 -- and leaked word of a new 'S4 Hana' ERP suite. But Wall Street and financial headlines are not taking SAP's abandoned margin forecasts -- replaced with operating income projections -- all that well. Company execs said profitability will improve by 2018, when cloud infrastructure investments will have been made and recurring revenue will prevail. SAP expects to hit the tipping point of cloud revenue surpassing conventional software license revenue by that year.
Reply  |  Post Message  |  Messages List  |  Start a Board
InformationWeek Is Getting an Upgrade!