The deal positions SAP to help companies "manage their entire workforce -- both temporary and permanent staff -- from initial recruiting and on-boarding to ongoing development, performance management, retention, and retirement," SAP said in a press release.

Based in Chicago, the 14-year-old Fieldglass has more than 250 corporate customers ranging from AIG and American Airlines to Johnson & Johnson and Verizon. The job descriptions range from lawyers, PR specialists, developers, and engineers to flight attendants, cashiers, clerical workers, and cooks. Managing contracts and statement-of-work services is getting to be a big business; companies now spend $3.3 trillion annually on freelancers, contract workers, and temporary staff, SAP said.

Fieldglass customer VMware, for example, manages more than $55 million in annual contingent labor in the US and Canada, including technical, business professional, and administrative positions, according to a recent case study (registration required). 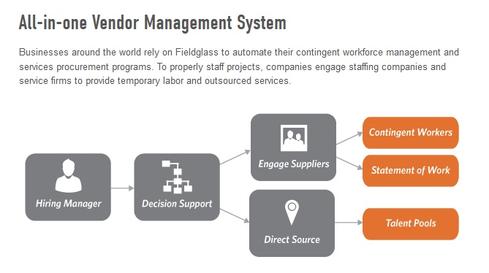 Fieldglass had more than $27 billion in workforce spending under management in 2012, according to a Staffing Industry Analysts report. The private company has more than 340 employees and was valued at roughly $220 million in 2010, when it last raised venture capital funding.

The terms of SAP's acquisition were not disclosed. The deal is subject to regulatory approval but is expected to close in the second quarter. Fieldglass's leadership team and employees are expected to join SAP upon the completion of the deal, according to an SAP spokesperson.

"Joining with SAP will allow us to dramatically accelerate our global growth plans and pace of innovation at the unique intersection of the human capital and procurement sectors," Jai Shekhawat, CEO and co-founder of Fieldglass, said in the release. The company's cloud-based vendor management system is used in more than 100 countries and 16 languages.

There's plenty of pressure on SAP to increase cloud revenue at all costs. But if the measure of a successful acquisition is adjacency to one's current market, SAP seems to have found a cloud-based vendor with natural connections to cloud assets including Ariba and SuccessFactors.

Doug Henschen is Executive Editor of InformationWeek, where he covers the intersection of enterprise applications with information management, business intelligence, big data and analytics. He previously served as editor in chief of Intelligent Enterprise, editor in chief of ... View Full Bio
We welcome your comments on this topic on our social media channels, or [contact us directly] with questions about the site.
Comment  |
Email This  |
Print  |
RSS
More Insights
Webcasts
Take DevOps to the Next Level
How the Rapid Shift to Remote Work Impacted IT Complexity and Post-Pandemic Security Priorities
More Webcasts
White Papers
2020 SANS Enterprise Cloud Incident Response Survey
The Top 5 Mistakes Everyone is Making in Vulnerability Remediation
More White Papers
Reports
The Need for Speed: Second Generation EDR
Are Unprotected Cloud Databases Leaking Your Data?
More Reports

The purchase price isn't being disclosed, but in other respects I like this deal. It's a good sign that the terms are not material to earnings (requiring disclosure), and it seems like a well-thought-out fit with what SAP is doing already.

Do I like that freelance, temporary, and contract workers are becoming such a fixture of the workforce? No, but that's the quarter-to-quarter, profit-motivated world we're living in.
Reply  |  Post Message  |  Messages List  |  Start a Board
Editors' Choice
Hot Topics