Justices seemed to be looking for a way ban Aereo without causing collateral damage to cloud computing.

The US Supreme Court on Tuesday heard arguments in American Broadcasting Companies v. Aereo, a case that has the potential to shape the contours of lawful innovation in digital content and cloud computing for years to come. The case pits online TV service Aereo against the television industry.

Aereo allows subscribers to view broadcast TV content through an Internet-connected device, or to store such content for later viewing. The service acts like a cloud-hosted digital video recorder, ruled lawful by an appellate court in the 2008 Cablevision decision, except that it acquires the broadcast TV signal via individual antennas, one for each subscriber.

If Aereo simply rebroadcast TV, it would create a "public performance," which is not allowed under the Copyright Act. But by capturing the broadcast TV signal on behalf of each subscriber through his or her own micro-antenna, the company claims that it is merely providing equipment for each subscriber to receive, record, and time-shift TV lawfully and privately, like other hosted DVR services.

Aereo in short argues that its technology allows massively parallel "private performances," which are allowed under Copyright Law. Broadcasters, who are obligated to provide content for free over public airwaves but collect retransmission fees from cable providers, see Aereo simply as an attempt to bypass copyright law and to avoid paying them.

[Learn why technology, not lawyers, may be your best defense against piracy. See Fight Software Piracy With SaaS.]

The Supreme Court justices who spoke during arguments sounded skeptical of Aereo's position.

"I'm just saying your technological model is based solely on circumventing legal prohibitions that you don't want to comply with, which is fine," said Chief Justice John Roberts to David Frederick, Aereo's attorney. "I mean, that's, you know, lawyers do that." Roberts was asking whether Frederick could provide a rationale for Aereo's decision to employ thousands of antennas other than to avoid liability under the Copyright Act.

Frederick's answer suggested that Aereo is doing what everyone in the cloud computing industry does: providing equipment to process data on behalf of customers. The plaintiff's contention, he said, "that we're somehow a content provider would mean that everybody who provides an antenna or a DVR is somehow a content provider. And if that's true, then the implications for the equipment industry are obviously quite massive and you can understand why that would frighten the cloud computing industry because that turns them into public performers whenever they are handling content." 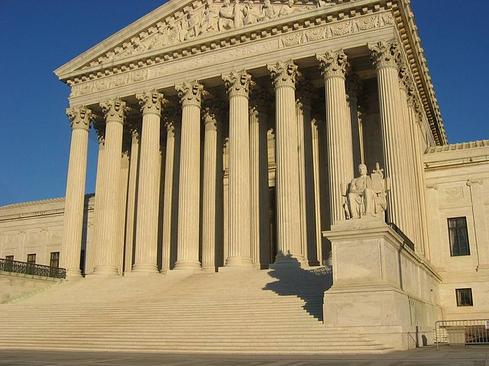 At the same time, several justices expressed concern that ruling against Aereo could doom the cloud computing industry. Justice Sonia Sotomayor worried that ruling against Aereo might outlaw services like Dropbox and iCloud. "How do I define [a public performance] so that someone who sells coaxial cable to a resident of a building is not swept up as a participant in this?" she asked.

When Justice Elena Kagan asked Malcolm Stewart, deputy solicitor general at the Justice Department, to explain how the argument from the broadcasters' attorney did not imperil cloud computing, Stewart at first suggested the distinction came down to a service that provided new content to users -- Aereo -- and a service that provided access to content the consumers already had. Yet upon further questioning, Stewart acknowledged the distinction isn't always obvious.

"I don't pretend that there is a bright line between providing a service and providing access to equipment," said Stewart.

>My advice to the television industry: strike now while the iron is still hot and go digital, full on, all the way.

That's good advice. The media companies not doing this will probably end up being bought in fire sale by some YouTube production company a decade hence.
Reply  |  Post Message  |  Messages List  |  Start a Board

But is Aereo really redistributing TV content? If it's leasing antennas to subscribers, the subscribers are pulling the content from the public airwaves and storing it in Aereo's cloud service. Would it be any different if Aereo's antennas were on customers' houses?
Reply  |  Post Message  |  Messages List  |  Start a Board
InformationWeek Is Getting an Upgrade!