Frank Gehry architecture practice spinoff creates Web-based office for sharing computer models for building design and construction, bridging multiple 3-D authoring tools.
David F Carr
Editor, InformationWeek Government/Healthcare
July 25, 2012
Gehry Technologies is a spinoff of the architecture firm founded by Frank Gehry, a pioneer in using digital technologies to plan his buildings. Gehry is known for the curved, rippling facades of buildings like the Guggenheim Museum in Bilbao, Spain, and the Experience Music Project in Seattle. According to a press release, "By working directly in a shared 3-D digital environment and collaborating across disciplines to bring fabrication expertise forward into design, Gehry used the technology now resident in GTeam to deliver structures such as 8 Spruce Street in New York City and the Foundation Louis Vuitton Museum now under construction in Paris (which was recently awarded AIA's prestigious BIM Excellence award)."

Gehry Technologies investors include AutoDesk, the company behind the AutoCAD computer-aided design tool, and Dassault Systemes, a product lifecycle management firm based in France.

"Collaboration is difficult, and there are a lot of problems caused by working from the wrong version of a file," said Matt Reid, senior VP of marketing for Gehry. Project participants are typically working from many locations and working with large volumes of data, including spreadsheets and PDFs as well as 3-D and 2-D drawings. "We're giving you all the advantages of Dropbox, along with all the security you need to work on big, collaborative projects," he said.

"Increasingly, the project never ends," Reid added, meaning there are post-production requirements to access the same data for building operations and maintenance. Having a social stream of updates associated with online collaboration makes it easier to "go back in time and understand how to reuse the data for other projects or look at how it's changed," he said.

The service could have potential beyond construction, in trades such as aerospace engineering, product design, or even movie set design--wherever 3-D models are used--but for now Gehry Technologies is concentrating on applications in the AEC industry it knows best.

Porter said social collaboration is the part of the tool he has used the least so far. "It allows you to see who is doing what and who has made modifications to what files. That's definitely new. We've never had that capability prior to this. We're not quite sure what to do with that information," he said.

Meanwhile, happy though he is with the product so far, he has a definite wish list for improvements.

What would really make GTeam more useful is a mobile client, Porter said. "That's a clear direction, an obvious direction they've got to take." Currently, GTeam makes it as far out into the field as the construction trailer, but it would be even more useful as a tool project managers could carry around a site with them, he said.

With an app for an iPad, or even an iPhone, someone working in the field could take a picture of a problem at a construction site and post it to the system, Porter said. "If you're in the field and you see an issue, you want to get it to the person who can resolve that as quickly as possible," he said. "Today, I could take a picture with my phone and email it to the architect," he said, but the architect would then still expect to be sent some follow-up documentation. Ideally, GTeam might also evolve to help automate some of the paperwork aspects of project management, he said. 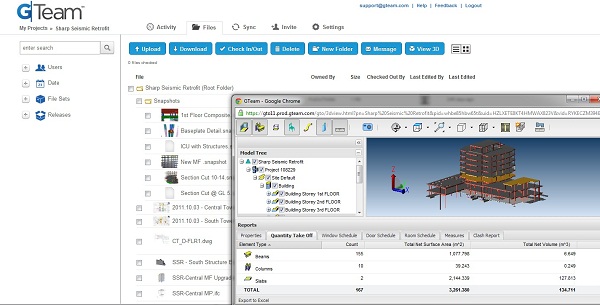 Exploring a 3-D model in GTeam