The Inevitable Rise of Intelligence in the Edge Ecosystem - InformationWeek

A new frontier is taking shape where smart, autonomous devices running data on 5G networks process information that can lead to near real-time insights enterprises need.

The implementation and adoption of 5G wireless, the cloud, and smarter devices is setting the stage for advanced capabilities to emerge at the edge, according to experts and stakeholders. Communications providers such as Verizon continue to flesh out the newest generation of wireless, which promises to offer more robust data capacity and mobile solutions. In brief, the edge has the potential to be a place where greater data processing and analytics happens with near real-time speed, even in seemingly small devices. On the hardware and services side, IBM, Nokia Enterprise, DXC Technology, and Intel all see potential for these converging resources to evolve the edge in 2021 in exponential ways -- if all the right pieces fall into place.

The edge is poised to support highly responsive compute, far from core data centers, but Bob Gill, research vice president with Gartner, says the landscape needs to become more cohesive.  “As long as all we have are vertical, monolithic, bespoke stacks, edge isn’t going to scale,” he says, referring to the differing resources created to work at the edge that might not mesh well with other solutions. 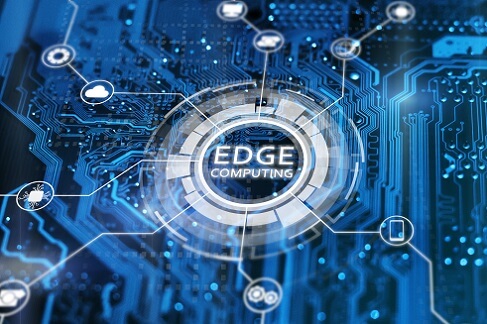 Gill defines the edge as the place where the physical and digital worlds interact, which can include sensors and industrial machine controllers. He says it is a form of distributed computing with assets placed in locations that can optimize latency and bandwidth. Retailers, internet of things, and the industrial world have already been working at the edge for more than a decade, Gill says. The current activity at the edge may introduce the world to even more possibilities. “What’s changed is the huge plethora of services from the cloud along with the rising intelligence and number of devices at the edge,” he says. “The edge completes the cloud.”

The focus of the evolution at the edge is to push intelligence to locations where bandwidth, data latency, and autonomy might otherwise be concerns when connecting to the cloud or core computing. With more autonomy, Gill says devices at the edge will be able to operate even if their connections are down.

This might include robots in manufacturing or automated resources in warehousing and logistics, as well as transportation, oil, and gas. Organizations will need some normalization of platforms and solutions at the edge, he says, in order to see the full benefit of such resources. “They’re looking for standardized toolsets and a way that everything isn’t a bespoke one-off,” Gill says.  This could include using open source frameworks deployed to create solutions that can be tweaked.

Gill expects there to be move toward a standardized approach in the next five years. He says enterprise leadership should ask questions about ways the edge can help the organization achieve goals while also eliminating risk. “The c-suite should be saying, ‘What is the business benefit I’m getting out of this? Is it something that’s replicable?’”

Edge computing is becoming an integral part of the distributed computing model, says Nishith Pathak, global CTO for analytics and emerging technology with DXC Technology. He says there is ample opportunity to employ edge computing across industry verticals that require near real-time interactions. “Edge computing now mimics the public cloud,” Pathak says, in some ways offering localized versions of cloud capabilities regarding compute, the network, and storage. Benefits of edge-based computing include avoiding latency issues, he says, and anonymizing data so only relevant information moves to the cloud. This is possible because “a humungous amount of data” can be processed and analyzed by devices at the edge, Pathak says. This includes connected cars, smart cities, drones, wearables, and other internet of things applications that consume on demand compute.

The population of devices and scope of infrastructure that support the edge are expected to accelerate, says Jeff Loucks, executive director of Deloitte’s center for technology, media and telecommunications. He says implementations of the new communications standard have exceeded initial predictions that there would be 100 private 5G network deployments by the end of 2020. “I think that’s going to be closer to 1,000,” he says.

Part of that acceleration came from medical facilities, logistics, and distribution where the need is great for such implementations. Loucks sees investment and opportunities for companies to move quickly at the edge with such resources as professional services robots that work alongside people. Such robots need fast, low latency connections made possible through 5G and have edge AI chips to assist with computer visions, letting them “see” their environment, he says.

Loucks says there are an estimated 650 million edge AI chips in the wild this year with that number expected to scale up fast. “We are predicting [there will be] around 1.6 billion edge AI chips by 2024 as the chips get smaller with lower power consumption,” he says.

World events have played a part in advancing the resources and capabilities at the edge, says Paul Silverglate, vice chairman and Deloitte’s US technology sector leader. “COVID has been an accelerator and a challenge as it relates to computing at the edge,” he says. Remote working, digital transformation, and cloud migration have all been pushed faster than expected in response to the repercussions of the pandemic. “We’ve gone 10s of years into the future,” Silverglate says.

That future may already be happening as Verizon sees the components of the edge coming together, says director of IoT and real-time enterprise Thierry Sender. “From a Verizon standpoint, we now have partners for enabling edge deeply integrated into our 5G network and wireless overall,” he says, “which means 4G devices get the benefit of the capabilities.” For example, Sender says for private infrastructure, Verizon has a relationship with Microsoft to deliver on compute resources that support mission critical applications large enterprises would have in warehouses or manufacturing. That ties together different bespoke solutions that enterprises use together to solve their needs.

The edge elements coming together in 2020 are building blocks for exponential change, Sender says. “2021 is the year of transformation,” he says. “That’s where a lot of the solutions will begin to truly manifest themselves.” Sender also says 2022 will be a year of disruption as industries adapt to real-time operational and customer insights that affect their businesses. “Every industry is being impacted with this edge integration to network,” Sender says.

This transformative move is well under way, says Evaristus Mainsah, general manager of the cloud, Cloud Pak, and edge ecoystem at IBM. “What we’re seeing is lots of data moving out to edge locations.” That is thanks to more devices carrying enough compute to conduct analytics, he says, reducing the need to move data to a data center or to the cloud to process. By 2023, expect 50% of new on-prem infrastructure will be in edge locations, he says, compared with 10% now. Enterprise data processing outside of central data centers will also grow from 10% now to 75% in 2025, Mainsah says. “Think of it as a movement of data from traditional data center or cloud locations out into edges.”

There is a generation shift taking place, says Karl Bream, head of strategy for Nokia’s enterprise business, which will take some time and see more agility, automation, and efficiency. “The network is becoming higher capacity, much more reliable, much lower latency, and can perform better in situations where you’re controlling high value assets,” he says. Bream calls this an inflection point, though networks alone cannot achieve the next evolution. Data privacy and security remain concerns, he says, as many enterprises must decide if they can allow data to reside offsite.

There are tradeoffs and choices to be made, but possibilities are growing fast at the edge. “We’re seeing web companies putting edge type scenarios into place to put storage closer and closer to the device,” Bream says.

The overall pattern of change occurring in the edge ecosystem is a bit familiar to Intel, according to Dan Rodriguez, vice president and general manager of Intel’s network platforms group. “It’s the same sort of transformation that we drove in the world of data centers in the 1990s and technologies we homed in the cloud allowing our customers to get to market much more quickly,” he says. Rodriguez sees possibilities for 5G and the edge to drive new business outcomes across vertical markets, which will include the pervasiveness of AI throughout the network and drive new services to market more quickly. “This is really the first time you are seeing compute and communications converge,” he says.

The benefits of the edge are being seen even now, Rodriguez says, giving a glimpse of what may be possible ahead. For example, Intel has been partnering with Audi to speed up weld inspections by 100X at one of the carmaker’s factories, he says.  There is also the potential to use the edge to give retailers faster insights into their consumer base. “This is going to have a transformational impact on how our customers deliver better business results,” he says.

Joao-Pierre S. Ruth has spent his career immersed in business and technology journalism first covering local industries in New Jersey, later as the New York editor for Xconomy delving into the city's tech startup community, and then as a freelancer for such outlets as ... View Full Bio
We welcome your comments on this topic on our social media channels, or [contact us directly] with questions about the site.
Comment  |
Email This  |
Print  |
RSS
More Insights
Webcasts
Making XDR Work in Your Enterprise - May 12
How the Rapid Shift to Remote Work Impacted IT Complexity and Post-Pandemic Security Priorities
More Webcasts
White Papers
A Decade of Passive DNS
Ransomware Defense for Dummies
More White Papers
Reports
Protection Strategies for a Cyber-Resilient Organization
Key Strategies for Managing New Risks in Cybersecurity
More Reports