Top 10 Most Hated Tech Mascots Ever

Mascots are marketing personified. When they're good, they're grrreat, as Tony the Tiger, one of the world's more successful mascots might say. When they're lame, uninspired, annoying or perplexing, they might end up on a list like this. Mascots are particularly important in the technology industry, because so many tech products and services are intangible and would benefit from an evocative symbolic representative. It's hard to imagine Linux without thinking about penguins. As for the mascots t
Thomas Claburn
Editor at Large, Enterprise Mobility
August 26, 2010 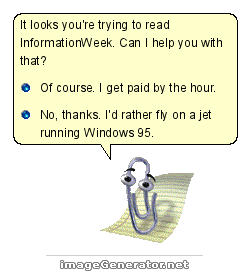 Introduced to the world in Microsoft Office '97 for Windows, Clippit the Office Assistant, AKA Clippy, has been declared "one of the worst software design blunders in the annals of computing," by Smithsonian Magazine. And similar sentiments have been expressed in countless other publications, blogs, and videos. Everyone hates Clippy, and such unanimity is rare online. Really, we should be thankful for Clippy as the source of endless mirth.

Clippy has fueled enough satire and ridicule that the chirpy little fellow could be the subject of a college course. RJL Software has created downloadable software to recreate Clippy. The website imageGenerator.net allows visitors to generate custom Clippy graphics. There are more Clippy parody videos on YouTube than you really want to see. Clippy has even inspired Halloween costumes.

But of all the Clippy humor, the funniest may be a segment on NPR's Wait Wait, Don't Tell Me from June 2008. Host Peter Sagal recited a litany of complaints about Windows that surfaced in a legal filing related to the Microsoft antitrust case and asked the contestant to identify the source, who turned out to be Bill Gates. Sagal joked that Gates had sent a message titled "CLIPPY MUST DIE," and the riff on Clippy that followed is simply hilarious. The segment can be heard on this YouTube video. Ignore the visuals and enjoy.