Questions About Microsoft's Acquisition of Yammer
(click image for larger view and for slideshow)
As a creator of social software for upwardly mobile employees, UpMo is hoping to create some momentum of its own by appealing to the employees directly.

Upmo has been pursuing its vision of an enterprise workspace for career development for several years, garnering favorable coverage in Fast Company. The service is a social network in which employees form professional connections and tag their profiles with skills, much as they would on LinkedIn, and it can also pull in profile data from LinkedIn, Facebook, or a human resources information system. The distinction from LinkedIn is that UpMo is meant to be a service for helping employees identify a career path with their existing employer, rather than helping them network to find a job somewhere else.

While UpMo believes that's a service companies should value, the company's strategy of selling to human resources executives hasn't worked all that well, Rob Garcia, UpMo's VP of product, said in an interview.

"Employees really love the product because ... it lets [them] find opportunities, network, and show what [they're] about," Garcia said. It's almost to the point where the less HR is involved, the more adoption UpMo gets and the more thriving the social community around it becomes, he said. "So we've decided to try a completely different route, delivering an employee-centric or user-centric product. Then we can sell to the enterprise, once we have adoption."

[ Want to learn social employee management from the best? Read How Facebook Manages Its Workforce. ]

With a top-down approach, UpMo found it faced skepticism from executives who wondered whether employees would really use the product. With a bottom-up approach, UpMo has the potential to show them employees are already using it. Garcia said UpMo is taking inspiration from Microsoft's acquisition of Yammer, which validates the idea that freemium tactics can build a great business. There is also a broader trend toward integrating social technologies into talent management applications that UpMo hopes to capitalize on.

Paid accounts start at $9.95 per employee, per month, at the "manager" account tier, which adds supervisor functions for talent discovery and analytics, as well as team and social collaboration. There's also a custom-priced enterprise version, which adds integration with human resources information systems, including SuccessFactors and Taleo, as well as social software integration for Yammer and Chatter. One of the scenarios the paid versions address is pulling together a team of people for a project, where UpMo can help identify the people with the right skills and provide a collaboration environment for organizing the team. UpMo also uses predictive analytics techniques to try to match employees to job opportunities, or job openings to potential recruits.

When used as a free service, without the explicit cooperation of management or enterprise IT, UpMo pulls job opportunity data from public job boards or the company website, Garcia said. In an enterprise implementation, UpMo can pull listings directly from HR and recruiting systems and also impose a standardized taxonomy of job skills, he said.

"At Intuit, which is one of our customers, they have a normalized set of skills they want to use that lives in Taleo, and we can take that info in as well," Garcia said. "But the system itself can work in an un-integrated way, and that's the freemium model we're going after."

Founder and CEO Promise Phelon, former executive of BEA Systems (now part of Oracle), told me in an interview last year that UpMo is "essentially trying to be LinkedIn for the enterprise" because she sees a hazard in all the best career resources residing in external networks like LinkedIn. "There are a lot of external factors taking your best talent, and there is no defense for it," she said. When employees don't see a clear path to advancement within the organization, that's bad for motivation and leads them to seek opportunities outside, she said.

UpMo has built out its service to include common social software functions, such as an activity stream that can incorporate @mention references to other users. UpMo activity can also be fed into general-purpose enterprise social networks such as Yammer, Garcia said. "Everyone really loves the interaction model, but we understand it overlaps with existing players in the space and it's not our intention to replace them," he said.

So far, the Yammer integration is mostly one-way, providing a feed from UpMo into Yammer, rather than allowing Yammer users to interact with UpMo from within Yammer, Garcia said. Yammer users can use an #upmo hastag if they want their status posts to be cross-posted into UpMo. The vision is that "it doesn't matter where the user is interacting socially, UpMo is going to be reading that," he said. 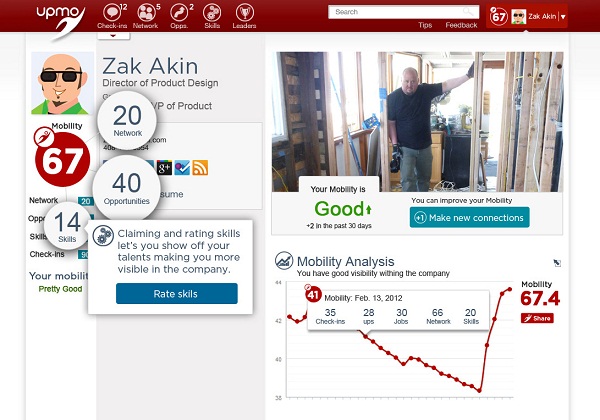