Wachter's Migration to SD-WAN Brought It Savings Over MPLS - InformationWeek

Breaking away from services that proved to be relatively stable over the years can be a hard ask, but technology provider Wachter says it took such a chance and realized savings by moving its data flow to SD-WAN. The company, which provides business solutions to commercial and industrial markets, had relied on MPLS-type infrastructure to connect its locations across country. After years of depending on that service, the company recently made a change that IT operations manager Carl Shriver now lauds.

Wachter had used infrastructure provided by a Tier 1 network provider to cover its national footprint of 13 locations and 1,400 employees, Shriver says. The company was primarily an on-premise operation but is increasingly moving services to the cloud.

SD-WAN is increasingly becoming mainstream according to Gartner, with early estimates pointing to 30% adoption among enterprises by the end of 2019.

Shriver says he was accustomed to relying on MPLS (multiprotocol label switching) for routing data and communications. His early resistance to change soon faded thanks to a smooth transition and the cost savings the company realized. “It’s a matter of changing routing tables and watching data flow across a different line than it was before,” he says.

Instead of paying a high price for a single line from one provider that goes to all locations, Wachter could leverage the best prices from carriers local to each branch office, Shriver says. “We were able to see a drop of about $1,500 per month [per site] and even more at larger sites that had greater bandwidth,” he says. All told, Wachter has realized about $200,000 in annual savings by making the switch to SD-WAN (software-defined wide area networks). “With MPLS, you really pay through the nose when it comes to bandwidth,” he says. 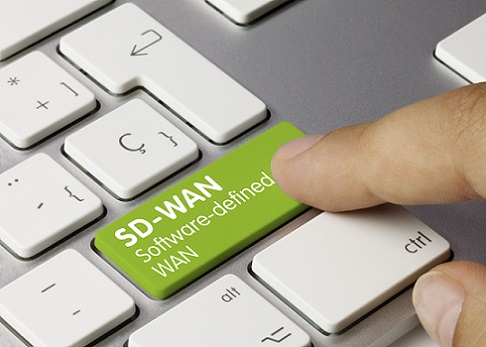 MPLS service is often offered through major telecom carriers, Shriver says, who bring switches, routers, and fiber lines to their clients’ locations. Businesses are usually guaranteed certain data speeds and availability through MPLS, he says, but those companies are also beholden to their providers. That can become an issue based on a business’s geographic spread, Shriver says.

For instance, if a business maintains operations in areas where their carrier has a strong presence, it might see competitive pricing for service, he says. However, if the business has operations in locations outside of their carrier’s prime territory, it could be charged a premium for service. This is because a carrier must lease lines from carriers that have stronger presences in such locations.

MNJ Technologies approached Wachter, Shriver says, about establishing an SD-WAN using Silver Peak devices. This would allow for multiple lower cost lines, he says, along with layers of redundancy at each location and additional freedoms. “With SD-WAN, you are carrier agnostic,” Shriver says. “We plug whatever bandwidth we want to into our devices.”

By establishing an SD-WAN, it changed up the structure and independence of Wachter’s data network. Rather than a hub and spoke model, where everything connected back to a home office, SD-WAN established more of a full mesh, Shriver says, built across the Internet. That way if one line to one site goes down, it is possible to route data around that site. “You have a decent backup for when things go pear-shaped,” he says.

Benefits Beyond the Savings

As more enterprises move their data from on-premise to the cloud and increasingly use SaaS, they look for efficiencies and flexibility, says Ben Niernberg, senior vice president with MNJ Technologies. “We often see customers with high MPLS costs and are carrier dependent,” he says. “You are at the whim of your provider if you are up or down, in many cases.”

Niernberg says moving to SD-WAN offerings can resolve such problems and alleviate certain common headaches. “If you’re the head of network infrastructure and the circuit goes down, the best use of your time is not spending three hours on the phone with a carrier trying to troubleshoot your issue,” he says.

An SD-WAN can run two diverse circuits to one device, Niernberg says, using them simultaneously. The network can also be optimized to send packets across the circuit that is running the fastest. “SD-WAN is very much like Waze,” he says. “It understands bidirectionally where traffic should go.”

This is part of an increased automation trend that, Niernberg says, further reduces the need for human intervention. It also allows for more optimized use of bandwidth and the creation of active-active environments that are becoming more complex in the provisioning of what data flows where and which data should take precedent. Niernberg says this trend frees businesses up to prioritize their core activities, better leverages IT spending, creates better returns and quality of service. “This is why so many SD-WAN solutions lean towards managed services,” he says.