More tools are available to give enterprise leadership greater clarity on the expenses and opportunities that come from cloud migration.

Sticker shock at the price of migrating to the cloud may be the starting and stopping points for organizations figuring out their digital transformation plans. The benefits of the cloud that CIOs propose might be countered by the cost concerns of their CFOs. More resources have emerged recently that may help enterprises better understand the investment needed and potential returns the cloud might offer.

Deloitte introduced a cloud complexity cost calculator that can give some perspective on what may occur if an organization gets tangled up in a wild mix of cloud solutions and resources. AtScale, a data virtualization provider, developed an ROI calculator of its own that enterprises can use to find potential savings through their cloud data warehouse and other resources. Other calculators for crunching numbers related to the cloud may be found online, but it is also essential for enterprise leadership to discuss what is at stake when making cloud investments. 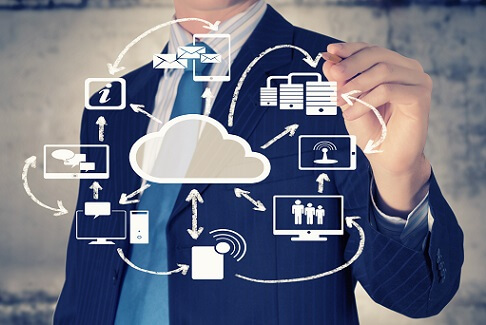 Naturally CFOs want to minimize expenses and maximize value and having such talks with CIOs, says David Linthicum, Deloitte’s chief cloud strategy officer. “If you’re able to get 10-20-30% more efficiency out of the existing infrastructure by leveraging cloud -- it is something they spend a lot of time discussing,” he says. “But what they don’t discuss is probably what they should discuss.”

Linthicum says such talks should weigh the ability for the cloud to be a force multiplier to transform the business, make it more agile, and compress the time to market. This could lead to rolling out product lines in a fraction of the time, which could increase sales, he says. Organizations might also see efficiencies from the cloud that boost their ability to acquire and integrate other companies more quickly, he adds. Enterprises can also scale their business up more readily through the cloud, to meet demand in the market they did not anticipate.

There are guidelines Linthicum says organizations should employ when valuing the agility of business transformation:

Three patterns tend to emerge when leadership raises questions about the cloud, Linthicum says. There may be naysayers who vehemently believe cloud is not safe, though that population is getting smaller, he says. “That used to be the majority of people on the executive team, maybe 80% six or seven years ago,” Linthicum says. “Now it may be 10% or 20%.” Part of the concern is that the organization’s data represents the crown jewels, which brings up security and maintaining compliance issues when leveraging public cloud, he says. It might even be extremely difficult to get some members of leadership to budge on this topic. “Cloud could be free, and migration could be free, and yet they’d still push back on it with arguments that have been debunked years ago but are still around,” Linthicum says.

On the flipside, overestimating the impact of cloud and presuming it is a form of salvation that cures all ills can be just as dangerous, he says. This can include believing that a full migration to the cloud will allow the organization to scale up easily. There may be an assumption that costs will always be lower via the cloud and everything will move faster with time to market compressed. “You’re setting expectations that the technology might not fit,” Linthicum says. This can lead to setting milestones that are missed.

Cost is impossible to ignore but it is not the only consideration on the table. Budget minders, such as the CFO, might focus on how migration may affect the organization’s earnings per share but not necessarily look strategically at what the business is trying to achieve, Linthicum says. CFOs tend to center on how the migration will be paid for, he says, as well as the transformation and operation of cloud resources. That can lead to unproductive ideas. “They want to fund the migration to cloud computing through the savings they get from cloud computing, and that almost never works,” he says.

Linthicum says those patterns tend to emerge when he talks to clients who have dabbled in cloud migration and want to accelerate their plans. The complexity of those plans may change in the future with the potential for increased costs and overall hinderance of operations. Having too many choices and the desire to procure the best of breed across different solutions can lead to a loss of a centralized vision and control, he says. This can include different teams using different solutions and platforms running on different clouds. “Because these folks are decoupled, they’re encouraged to make decisions for themselves,” Linthicum says. “Kind of like a drum circle of technology with people building things.”

While that may produce some positive results, there still needs to be centralized understanding of common architecture and security layers, he says. Otherwise, the complexities can become too heterogeneous with too many moving parts that impede operations, which can lead to more spending to regain control. “They can end up migrating twice and going back to the drawing board,” Linthicum says. “That’s going to get worse.” The growing number of options to leverage the cloud also means hunting for talent that has the right skillsets to maintain these systems for long-term. “That’s going to be the problem to solve and I see that repeating over and over again in the market now."

With more tools such as cloud cost complexity calculators available, Linthicum says organizations should focus on the reality of what the cost risk is to their operations if they stumble and if they fall behind. “They may know what it will cost to migrate the code, the data, and the core systems,” he says. “They might not have an understanding of what the operationalization of those things is going to be moving forward.” The cost of complexity will have to be discussed by leadership in order for their plans advance. “It’s just figuring out what that cost complexity is and figuring out the impact on the business,” he says.

Joao-Pierre S. Ruth has spent his career immersed in business and technology journalism first covering local industries in New Jersey, later as the New York editor for Xconomy delving into the city's tech startup community, and then as a freelancer for such outlets as ... View Full Bio
We welcome your comments on this topic on our social media channels, or [contact us directly] with questions about the site.
Comment  |
Email This  |
Print  |
RSS
More Insights
Webcasts
The Experts Guide to Ransomware Response
Multi-Cloud Data Management for Modern Applications
More Webcasts
White Papers
Brand Protection During a Global Pandemic
Annual Cybercrime Report - Cybersecurity Ventures
More White Papers
Reports
Enabling Enterprise Resiliency Through Cyberthreat Detection
The State of CCPA 2021
More Reports