Enterprise Social Networks: A Guided Tour
(click image for larger view and for slideshow)
Yammer is introducing "universal search," along with an option for project or interest groups within a Yammer enterprise social network to sign up for services without necessarily enlisting the company as a whole.

Those features are included in a spring update to the Yammer cloud-based enterprise social network that went live Tuesday. Other features include a new way of tagging pages or documents as official content, a release of the Yammer Embed feature that's long been in private beta, a Web part for integration with Microsoft Office 365, and updated mobile apps.

Although traditional search engines might mean inclusion of multimedia content when they refer to "universal search," Yammer's concept is different. To Yammer, universal search makes it possible to search across connections to both enterprise and cloud-based systems integrated with a Yammer network. For example, a search by customer name might turn up automated updates from Salesforce.com, SAP, and a Microsoft SharePoint site, as well as posts by users about that company.

"All the data that gets pulled out of systems to populate the ticker or activity feed also gets indexed for universal search," CEO David Sacks said in an interview. "It really addresses the problem of how to get universal search across cloud applications. Traditionally, enterprise search appliances just crawl all the data behind the firewall."

Through the Yammer activity stream API, the system logs whenever a record is created or updated, Sacks said. "Over time, we get a complete index of all the data."

Actually, Yammer does not index the underlying data, but only the metadata coming into the feed, Sacks acknowledged—in other words, it does not index the full customer record, just the activity post with the customer name, timestamp, and metadata such as a change in status from "lead" to "prospect." In the case of document management systems, Yammer might eventually pursue full-text indexing of the underlying documents, but for now, it simply tracks activity about documents added or modified. Native Yammer content such as conversations and web pages are indexed more thoroughly.

Yammer is also tweaking its enterprise social networking strategy, which has always revolved around a freemium business model to provide another option for users to switch from being free to paying customers.

Yammer allows the creation of ad hoc social networks that include everyone within the Internet domain for a specific organization, and the service is free until users decide they need access to its premium features, including greater administrative control. Yammer's base fee for a commercial agreement is $5 per user per month.

By introducing a Premium Groups option, Yammer is adding a la carte pricing for organizations that might want to grant a higher level of service to a group of users for a flat fee of $79 per month. "This gives groups in free networks the ability to upgrade just for their group, not for the whole network," Sacks explained. "We think this provides a way to get a Yammer network claimed department by department without having to wait for an all-or-nothing decision." 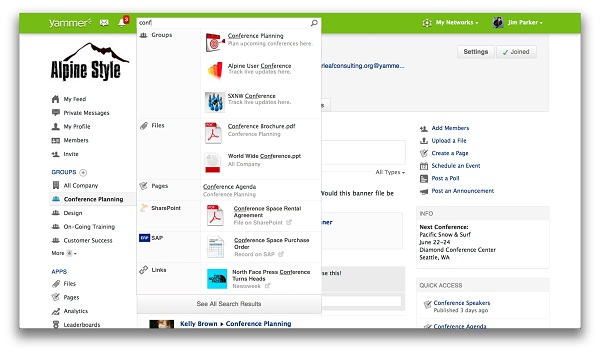 --The release of Yammer Embed, which makes it possible to display a feed from a Yammer Group inside an external Web page or Web application. "This has been in beta for a long time, while we've been working out bugs with all environments in which it could live," Sacks said. The required snippet of embed code is displayed alongside every group listing. Feeds are displayed only to users who are logged into Yammer and authorized to access content from that group.

--A Web part for embedding Yammer content in Office 365, Microsoft's cloud collaboration service. Office 365 includes a version of SharePoint, for which Yammer had previously released a Web part integration.

--An updated user interface for the Yammer iPhone and Android apps, featuring slide-out navigation for smoother access to groups, profiles, and feeds.

IT's challenge in dealing with social networks comes on two fronts: How to interact with would-be customers on big social networks like Facebook, and how to provide employees on internal networks with collaboration that's as powerful as their Facebook experiences. This virtual event, Social Business: Marshaling Expertise, Engaging Customers, Building Brands, will help IT leaders sort through their strategic choices. It happens April 26.