Though now part of Microsoft, Yammer is determined to maintain its pace of innovation. Meanwhile, HootSuite users now can interact with Yammer as a panel on the HootSuite social media management dashboard.
David F Carr
Editor, InformationWeek Government/Healthcare
August 14, 2012

Questions About Microsoft's Acquisition of Yammer
(click image for larger view and for slideshow)
Yammer announced a series of user interface improvements Tuesday, along with a partnership with HootSuite to make Yammer feeds available from within the same dashboard social media managers use to track Twitter and other public social networks.

The summer update to Yammer's cloud-based social networking software should answer critics who wondered whether Yammer would be able to maintain its pace of innovation, now that it is part of Microsoft, Yammer CTO Adam Pisoni said. The $1.3 billion acquisition closed in July, but Yammer has been continuing on the course it set as an independent company. "Maintaining Yammer's velocity and business model is paramount," Pisoni said. Yammer will be looking for productive ways it can combine forces with the Microsoft developers working on SharePoint and other products, "as long as it doesn't slow us down too much," he said.

Improvements delivered in this update include a redesign of the Yammer home page, a new Inbox feature for capturing the most important messages requiring a reply or other action, and an Online Now feature showing which contacts are currently connected to the social network and available to chat. Online Now looks a lot like the Facebook "online friends" feature, with presence indicators and chat boxes anchored to the bottom right of the screen.

The home page redesign eliminates the long list of apps previously displayed down the left hand side of the page. Instead, the navigation elements on the left are limited to My Feed, the new Inbox, and a listing of groups the user belongs to. The navigation elements for Invite, People, Files, and Apps have moved to the upper right hand corner, with Apps as a drop-down list. Yammer also is giving customers more control over the branding and messaging on the home page, including the ability to pin an important notice to the top of the page and have it stay there until the user acknowledges having read it. Administrators also can pin user interface widgets, including custom widgets, to the right hand side of the screen to make them more visible.

"Yammer is primarily a very bottoms-up, self-organizing product, but there are a couple of areas where we recognized it would really enhance the product to give more administrative control," Pisoni said.

The new Inbox section of the user interface adopts some of the "best elements of email," Pisoni said, in another acknowledgement of the disadvantages of the social media communication, where messages can scroll past unread if you're not paying attention. The Inbox segregates out messages that require your attention, such as questions that were addressed to you or workflow items requiring you to take action. 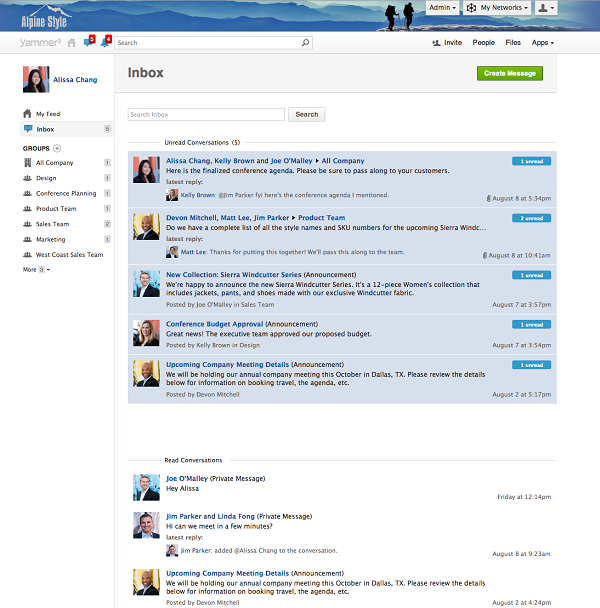 Many of these messages were previously displayed as notifications, but Yammer now has redefined notifications as messages that don't necessarily require a response, such as the notification that you've been added to a group.

Yammer also announced a series of new partnerships, of which it called out one with HootSuite as the most significant. HootSuite is a popular tool for monitoring and replying to multiple social media feeds, and like Yammer it's sold on a freemium model, meaning that a mass market of users employ the free version while those who use it most seriously upgrade to paying accounts. Both Yammer and HootSuite recently have been building out their partner networks and emphasizing integration with other products, and now the two are coming together.

"This is the first internal social network HootSuite has integrated to the dash," said Mark Holder, director of integration partners at HootSuite. "It's all about simplifying your communication and increasing your productivity."

On the HootSuite dashboard, feeds from multiple social networks and applications can be displayed as side-by-side panels, and now Yammer feeds can be displayed right next to Twitter feeds. In addition to monitoring from the dashboard, users can reply to conversations in Yammer, post messages and file attachments, and take most other basic actions. The HootSuite interface doesn't try to duplicate the full Yammer experience, but it covers the essentials, Holder said.

The idea is that social media managers need to participate in both external and internal conversations, and this lets them do so through a common user interface, Holder said. The integration doesn't include any mechanism for users to forward a message from a public social network to the Yammer network, but users can fairly easily accomplish that with a copy-and-paste, he said. The integration app was created by Invoke Media, the parent company HootSuite was spun off from.

In addition to HootSuite, Yammer announced partnerships with Bevalley (business analytics), FuzeBox (videoconferencing and visual collaboration), Get Satisfaction (customer support and customer engagement communities), If This Then That (data sharing between cloud and social services), Mindflash (online training), Mindjet (collaborative work management), and Zapier (data sync between cloud services). Pisoni said Yammer now has more than 30 integration partners and will be adding more in coming months.

Get Satisfaction CEO Wendy Lea said partnerships are becoming more important for all sorts of social software companies. "We all realized it takes a lot of features and products to make a whole product," she said. That's why her company and others are polishing their application programming interfaces and trying to show their products can be part of a larger solution, she said.