Microsoft aims to explore the possibility of an undersea data center for lower costs and environmental sustainability with its Project Natick.

Data centers drain energy and generate massive amounts of heat. This has forced companies to get creative with how they house their data and regulate the temperature of devices storing it.

Deltalis RadixCloud data center, for example, is naturally cooled by chilly air and water in the Swiss Alps, where it occupies a former Swiss Air Force control center. Iron Mountain stores data in an underground limestone mine located in Pennsylvania.

Microsoft is pushing the boundaries of data storage with Project Natick. While the idea of storing a data center underwater at first seems unrealistic, research indicates it could be environmentally friendly and lower costs.

It was Feb. 2013 when Microsoft employee Sean James, who had served on a Navy submarine, introduced the idea of an underwater data center powered by ocean energy. Norm Whitaker, managing director of special projects for Microsoft Research, built a team to work on the project, which kicked off in Aug. 2014.

One year later, a prototype submarine was deployed one kilometer off the California coast. The team was concerned about hardware problems and packed the steel capsule with 100 sensors to gauge motion, pressure, and humidity, reported the New York Times.

The prototype was tested and monitored for 105 days between Aug. 2015 and Nov. 2015. After a successful first try, engineers decided to continue the experiment. The team is currently working on an undersea system three times the size of its prototype, which measured eight feet in diameter.

On Project Natick's website, Microsoft explains how the project could reduce latency for people living near the coast. Half of the world's population lives within 200km of the ocean, it says, and offshore data centers could boost Web speeds because of their close proximity to shore.

Microsoft also said it believes it can mass-produce the underwater capsules and cut the deployment timeframe to 90 days. It currently takes two years to launch a data center on land.

Project Natick is a big idea; one that will require Microsoft to reconsider the traditional maintenance of a data center.

Unlike servers on land, undersea capsules and servers would have to be built for years without maintenance. Microsoft anticipates the lifespan of a capsule will be about 20 years; after that, it will be surfaced and recycled. 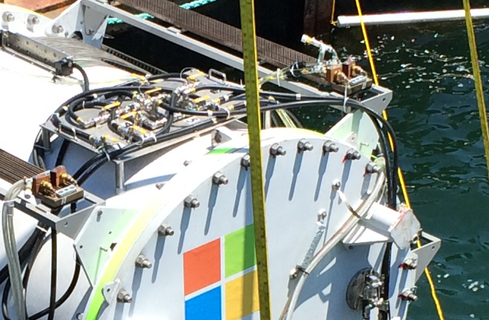 Engineers are working to build computers to last five years inside the underwater capsule. After each five-year cycle, the data center would be surfaced, updated with new devices, and redeployed.

An initiative like this will undoubtedly spark environmental concerns. Microsoft notes Natick data centers are cooled by the ocean's temperature, do not consume water, and run on energy produced by the water's movement.

Because it didn't add new energy to the water, the prototype did not significantly alter the surrounding temperature of its undersea environment. Researchers claim they measured an "extremely small amount" of local heat a few inches around the vessel, according to the Times report.

Microsoft's project closely follows news of Facebook's newest data center in Clonee, Ireland. The facility will run on energy generated by renewable power from Ireland's windy environment, but will use an indirect cooling process due to the ocean wind's high salt content.

Kelly Sheridan is the Staff Editor at Dark Reading, where she focuses on cybersecurity news and analysis. She is a business technology journalist who previously reported for InformationWeek, where she covered Microsoft, and Insurance & Technology, where she covered financial ... View Full Bio
We welcome your comments on this topic on our social media channels, or [contact us directly] with questions about the site.
Comment  |
Email This  |
Print  |
RSS
More Insights
Webcasts
What We Can Learn from Sports Analytics
How Elite Analyst Teams are Transforming Security with Cyber Reconnaissance
More Webcasts
White Papers
How to Prioritize Risk Across the Cyberattack Surface
Cloud Connectivity -- Your Guide to the Network
More White Papers
Reports
Are Unprotected Cloud Databases Leaking Your Data?
2021 Top Enterprise IT Trends
More Reports

One of the coolest things about today's technology is the fact that today's companies are really going after amazing ideas. Who would have thought Microsoft would come up with an ambitious idea like this?

Well, a lot of it has to do with the fact Facebook, Apple, Amazon and Google are doing moonshots. Microsoft's got to compete in this science-fiction-turned-reality-world.
Reply  |  Post Message  |  Messages List  |  Start a Board

I can imagine these underwater data centers floating out there to support ocean-going military operations. No?
Reply  |  Post Message  |  Messages List  |  Start a Board
Editors' Choice
Hot Topics