Oracle Disses Cloud Real Estate to its Own Detriment - InformationWeek

In the midst of a rush to the cloud, Oracle CEO Mark Hurd told Fortune 'real estate' is not much of a factor. He may learn otherwise.

Ed Featherston, principal architect at Cloud Technology Partners in Boston, has asked whether 2017 is the year the cloud land grab?

He's compared the migration to the cloud to the 1860s migration West. It's a good analogy.  In the 1862, the federal government passed the Homestead Act where settlers could get 160 acres of public land for free by living on it for five years. The move set off a huge land rush.

The comparison to the cloud is imperfect – no government action required. But as governors of their domains, the cloud suppliers are attracting droves of new customers by extending free offers and making it extraordinarily easy to settle. "Four months into the year, 2017 is shaping up to be the year of the great cloud land grab," wrote Featherston, comparing the present migrations to the cloud to its Conestoga wagon-based predeceessor.

Microsoft, Google, IBM and Amazon would all like to see more permanent customers moving into their clouds. So would Oracle, although it's late to take part in the "land grab."

To cater to this mass migration, Amazon Web Services has invested in massive cloud data centers around the world. Knowing AWS' headstart is an issue, Oracle CEO Mark Hurd explained it away to Fortune in a story April 12: We Can Beat Amazon and Microsoft Without as Many Data Centers.

The world is seeing a build out of massive data centers on a scale not seen before. By hyperscale, think of the Facebook facility in Prineville, Ore., or the Microsoft data center outside Chicago with room for 300,000 servers. The number of hyperscale facilities has increased from 259 in 2015 to 346 by the end of 2017. It'll increase further to 399 in 2018 and 485 in 2020, according to Cisco's Global Cloud Index compiled with Synergy Research. Those 485 will represent 47% or nearly half of the data center servers in operation in 2020. Hyperscale centers will eventually overshadow the remaining enterprise data center facilities in server footprint.

The biggest investors are the big four of cloud computing: IBM, Google, Microsoft and Amazon Web Services. Synergy director of research, John Dinsdale, told Fortune: “What marks them out as different is their global presence, marketing muscle, ability to fund huge investments in hyperscale data centers and, in most cases, a determination to succeed in the market.” 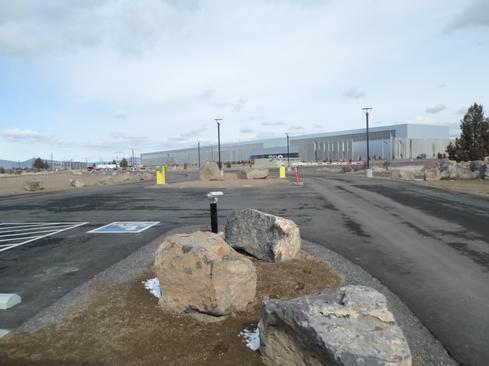 Amazon, Microsoft and Google together are estimated to have spent $31.5 billion on such data centers in 2016, according to the Wall Street Journal, and $26 billion in 2015, according to RBC Capital. (IBM, Apple, eBay and Yahoo as well as IBM are also hyperscale builders, and are not included in that total spending estimate.)

Oracle claims to be playing with this crowd. But Oracle had a capex budget of $1.7 billion in 2016, some of which needed to be spent on upgrading its large catalogue of online enterprise applications. It said in January it would build three new data centers for $1.1 billion in the first half of 2017. Which will still leave it several years behind the competition.

"If I have two-times faster computers, I don't need as many data centers," Hurd told Fortune's Barb Darrow in Boston. That statement is not reassuring.

From Oracle's statements, its cloud is using Exadata servers, which are typically powered by two 18-core Intel x86 chips. In that case, those data centers are not twice as fast as Amazon's, Google's, or Microsoft's, which also use Intel x86 servers, and Oracle may or may not be a match for them. Each of the major cloud suppliers is contracting with Intel to produce its standard chips tweaked for more cloud server capacity, according to the suppliers' requirements. It's unlikely anyone can get Intel to produce chips that are twice as fast solely for them. That would risk Intel's disruption in the cloud server market.

But the "two-times faster" computers comment was only Hurd's first gambit. His second was: "If I can speed up the database, maybe I need one fourth as many data centers. I can go on and on about how tech drives this."

"Our core advantage is what we've said all along, which is that it's about the intellectual property and the software, not about who's got the most real estate," Hurd told Fortune's Darrow.

No doubt he could go on but it's just as well that he didn't. The second assertion makes even less sense than the first. Operations in the cloud are a complex mix of network speed and bandwidth, data transfer speeds and server processing power, with database playing a role but not a dominant one.

The core of the Exadata approach is to enclose in one appliance a system that scales up to a very large, data-intensive job. But cloud operations of necessity accommodate a wide variety of workloads, in addition to large database-style jobs. The key to the cloud's architecture in cases other than Oracle's is that it's based on flexible scale-out designs, able to temporarily tap into many clustered servers and network services, then fall back to a steady state. It's unlikely that relying on Exadata gives Oracle a two-to-one advantage, never mind needing one-fourth as many data centers.

To be a cloud supplier, it's necessary to compete on a global scale with a network of scale-out data centers. For one supplier to claim it doesn't need as many data centers as the market leaders is to overlook the influence of customer response times, which are dependent on distance-related latencies in the network. The more large scale data centers near concentrations of customers and customer data, the more built-in advantage a cloud provider will enjoy.

The picture is muddy because there's no definition of a hyper-scale data center and vendors don't offer details on the size of their data centers. But here's how the cloud providers shakedown as data center builders.

Amazon has built data centers in 16 regions around the world, each with multiple availability zones. Each zone has the functionality of a separate data center. AWS' U.S. East in Ashburn, Va., has four zones but that's still not the sum of its data centers. U.S. East is probably the target of James Hamilton's comment in his personal Perspectives blog, How Many Data Centers Needed Worldwide: "As the region scales, to avoid allowing any of the facilities that make up the region to become too big to fail, the number of data centers can easily escalate... AWS already has regions scaled far beyond 10 data centers." Hamilton, who is a distinguished engineer at AWS, says his Perspectives blogs don't speak for his employer. Amazon basically doesn't disclose how many data centers it's running in total, only the regions where they're located.

Likewise, Google lists seven regions with 2-4 zones per region specifically for Compute Engine. That scarcely tells the full story. Google delivers search and other services at high speed, which would only be possible through a widespread data center network and content delivery system. I'm wagering it has a network of more than seven data centers but Google so far has declined to put a number on its total.

Microsoft has Azure data centers in 34 regions, with four more pending. Microsoft hasn't created zones in the same way that Google and Amazon have. It will move data 250 miles outside an Azure center to a distant backup site, but that's different from operating a separate data center.

Oracle claims cloud data centers in 29 regions with three centers per region, with three more pending, but there's no evidence in its capital spending that these data centers are the equivalent of Amazon's or Microsoft's. CEO Hurd declined to compare Oracle's $1.7 billion capital spending in 2016 to the average $10.5 billion Google, Microsoft and AWS each spent in his talk with Fortune.

Land promoters wouldn't have been able to say real estate doesn't matter during westward rush caused by the Homestead Act. Oracle may find it equally hard to say the same thing in the cloud era. Those with hyperscale data centers are making free services available to show off their advantage. A year ago in an ad in the Wall Street Journal, Microsoft said: Break Free From Oracle: Now is the time to move your Oracle databases to SQL Server with free licenses. link

AWS has free migration tools, including a schema conversion tool, to make it easier to leave on-premises database systems and move to AWS Aurora or other online databases. Customers on 20,000 occasions have chosen to do so, it said in a blog March 7.

With such threats looming, it becomes necessary to explain why the cloud competition "is not about who's got the most real estate." On the contrary, it still is. Data centers close to concentrations of customers mean shorter network links and low response times. In this land grab, real estate still counts.

Charles Babcock is an editor-at-large for InformationWeek and author of Management Strategies for the Cloud Revolution, a McGraw-Hill book. He is the former editor-in-chief of Digital News, former software editor of Computerworld and former technology editor of Interactive ... View Full Bio
We welcome your comments on this topic on our social media channels, or [contact us directly] with questions about the site.
Comment  |
Email This  |
Print  |
RSS
More Insights
Webcasts
Building Asset Management into Your Enterprise Security Strategy
Take DevOps to the Next Level
More Webcasts
White Papers
Gartner: Hype Cycle for Security Operations
From MFA to Zero Trust
More White Papers
Reports
Assessing Cybersecurity Risk in Todays Enterprises
The Malware Threat Landscape
More Reports

How to Submit a Column to InformationWeek InformationWeek Staff 4/9/2021
White Papers
A New Take on Cloud Shared Responsibility
Lessons Learned Investigating the SUNBURST Software Supply Chain Attack
5 Steps to Perimeter-Less Security: Adopting a Zero-Trust Model
The Essential Guide to Securing Remote Access
Cloud Threats Are Different, Your Security Should Be Too