The defiant math of Radiohead's song "2 + 2 = 5" can now be found in an enterprise storage system called IRIS from Symbolic IO. With IRIS, which stands for Intensified RAM Intelligent Server, the whole is greater than the sum of the parts. That turns out to be an advantage because you can allocate less storage space for the parts than they'd require as a single set.

The four-year-old company, founded by CEO Brian Ignomirello, who served as CTO of HP, claims it has found a way to store data in substantially reduced form and to retrieve it without any loss in random access memory (RAM). Symbolic IO's technology, which the company says is the first computational-defined storage product, thus amounts to magic, in the sense that "any sufficiently advanced technology is indistinguishable from magic," as author Arthur C. Clarke put it.

Indeed, Symbolic IO describes its storage system in magical terms when it refers to IRIS "'materializing' and 'dematerializing' data in real-time."

[For more on how storage is advancing, read IBM Storage Breakthrough May Speed up Smartphone Apps.]

Asked in a phone interview whether Symbolic's technology could be compared to the fictional hyper-efficient compression algorithm created by Pied Piper in HBO's satire Silicon Valley, Ignomirello laughed, even as he acknowledged there's something apt about the comparison.

Symbolic IO's IRIS offers a new architecture for handling computing tasks, one that isn't tied to storage media. It rewrites the language of data so that it can be handled more efficiently in the processor. It has the speed advantage of an in-memory database, while it mitigates the disadvantage -- having to store everything in limited memory -- through a way to reduce the size of the data.

These storage improvements should benefit anyone running large database queries, particularly transactions that require speed. In an example, the company modeled a content delivery environment for a large cable provider. With 80 nodes each streaming 80 movies, the resulting CPU utilization only reached 7%.

Ignomirello's patents and patent applications frame the technology in a more mundane light. "Bit Markers and Frequency Converters," filed in 2014, outlines a way to improve the efficiency of stored data. "By encoding raw data and storing the encoded data, one can reduce the amount of storage needed for a given file," the patent application explains.

The encoding process divides data into chunks and then creates bit marker tables that describe these chunks. "When the bit marker output is smaller than the subunit input, it will take up less space on a storage medium, and thereby conserve both storage space and the time necessary to store the bits," the patent application says.

As described in a granted patent, "Method and Apparatus for Dense Hyper IO Digital Retention," raw data gets broken down into vectors. Those vectors may be concatenated before being mapped to a bit marker.

What's more, because IRIS can recognize that "the absence of a digit implies a zero," these binary tables can be further shortened by excluding bits without losing the ability to uniquely identify the source data. The Bit Markers patent filing offers an example: The binary data chunk 11111101, were it to appear 10,000 places in stored data, would require more than 111 billion bits to store. But represented by the bit marker 1100, only 11 million bits would be necessary to store the same information.

In other words, IRIS reduces the data, without loss and without the overhead of compression, while also making it functional as an instruction set. The data can be reconstituted in real-time. 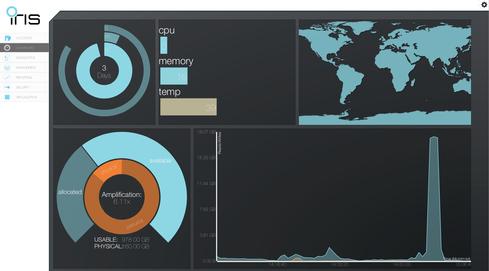 "We've really altered the binary format into a different language to tell the processor to create data on the fly," said Ignomirello, who notes that the transformative nature of the data algorithm makes it extremely secure without encryption.

According to a beta customer -- New York-based MetTel -- its previous system took several minutes to run advanced database queries, while IRIS completed the task in seconds. "The IRIS solution isn't only the fastest product we've used, but it eliminates very real challenges for our organization, including data creep, duplication of data, and it is creating one place for management workflow," said Will Prince, VP of operations, in a statement.

Scott Sinclair, senior analyst with Enterprise Strategy Group, in a phone interview, said that after he spoke with Ignomirello it was clear the company is doing something interesting. "But with all new technologies, there's a vetting process," he said. "They still have to prove themselves."

Sinclair said there's a lot to like about the technology, "specifically the way they've architected for an era in which storage is dominated by these memory-centric technologies, instead of disk-centric ones. To me, that's the key differentiator."

As for the potential security benefits of IRIS, Sinclair considers it to be more a matter of security through obscurity than some equivalence to encryption. He likened the situation to Apple's claims about Mac security back when there were few attacks on the platform.

IRIS is fast because it reduces the size of the data and because it operates in RAM. Ignomirello says IRIS is 10x faster than Intel's 3D XPoint and 10,000 times faster than NAND flash. The company's device patent describes a system capable of "a 57.6 GB constant I/O level that is 76.8x faster than any x86 and high performance computer in existence today." This is not a product speed claim, however. Rather, it describes maximum throughput in RAM compared to x86 platform limitations.

Unlike a RAM-based system, IRIS doesn't lose data when powered down. It includes a non-volatile storage component.

"Our modules (an NVRAM derivative) are tightly integrated with IRIS to maintain non-volatile status and ensure they operate correctly and efficiently," a company spokesperson explained in an email. "Prior to Symbolic IO's proprietary, patent–pending software, which enables more efficient processor utilization and density within the NVDIMM, nothing has worked this way. NVDIMMs have a flash component, but that only kicks in upon shut down/power outage; in this instance the Flash element is where data is stored while backed up by the supercaps."

IRIS shares one characteristic of RAM, however: It's expensive. Symbolic IO's hardware, which comes in three forms -- IRIS Compute, IRIS Vault, and IRIS Store --– starts at $80,000, and goes up from there. IRIS is scheduled to ship in Q4 2016.

Thomas Claburn has been writing about business and technology since 1996, for publications such as New Architect, PC Computing, InformationWeek, Salon, Wired, and Ziff Davis Smart Business. Before that, he worked in film and television, having earned a not particularly useful ... View Full Bio
We welcome your comments on this topic on our social media channels, or [contact us directly] with questions about the site.
Comment  |
Email This  |
Print  |
RSS
More Insights
Webcasts
Building the SOC of the Future: Next-Generation Security Operations
5 Steps to Solving Modern Scalability Problems
More Webcasts
White Papers
Cyber Threats & Trends: Jan-June 2020
How to Compete in Financial Services IT
More White Papers
Reports
Special Report: Understanding Your Cyber Attackers
2020 State of Cybersecurity Operations and Incident Response
More Reports