50%
Tweet
Apple's latest retail outlet will pitch products like the iPad 2, iPhone 4S, and MacBook Air to commuters at one of the world's busiest transportation hubs. Check out our visual tour. 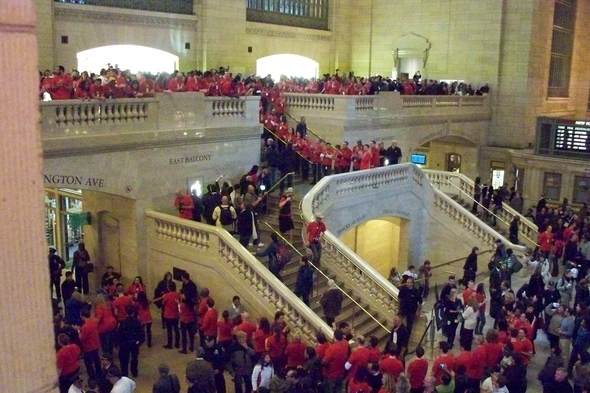 The store sits on a terrace high up on the station's east and northeast corners, overlooking the famous main concourse, which has starred in movies such as North By Northwest, The Cotton Club, and Superman.

The store features all of the services that are found in more conventional Apple Stores, such as a Genius Bar, a Personal Setup station where consumers can have their Apple products fully configured before leaving the shop, and workshops on topics such as digital photography and movie making, Mac basics, and tips and tricks for the iPhone 4S and iPad 2.

For businesses, the Apple Store at Grand Central houses a team of enterprise experts who can offer help with hardware, software, and networking, as well as financing. Small business owners who visit the store can also sign up for a service called Joint Venture, through which they can receive ongoing tech support and planning for $499 per year.

One of the hundreds of shoppers to pack the store at the opening was Ed Garcia of White Plains, NY, who commutes regularly through Grand Central. He said he liked the store's convenient location, but worried it might lead him to make more impulse purchases. "I already spend enough on Apple products," said Garcia, clutching an iPhone.

For Apple, that's the whole point. The company already maintains a number of marquis stores in high-traffic locations, such as San Francisco's Union Square, Beverley Hills, Calif., and New York City's Fifth Avenue. The company will count on the Grand Central store to further boost its retail presence and help push new products like the upcoming iPad 3, which is slated to ship in February.

Comment  |
Email This  |
Print  |
RSS
More Insights
Webcasts
5 Steps to Integrate SAST into the DevSecOps Pipeline
Cloud Security Threats Enterprises Need to Watch
More Webcasts
White Papers
NetFlow vs Packet Data
[Exclusive InformationWeek IT Trend Report] The Cloud Gets Ready for the 20's
More White Papers
Reports
Can You Spare 10-12 Mins to Help Us Out with a Survey on Tech Trends?
Got 7 Minutes? Dark Reading Needs Your Help With Our Survey on Incident Response
More Reports

From a business perspective, Grand Central Station is a solid location that's bound to do well for an Apple store. From an aesthetics/nostalgia perspective however, I'm a little disheartened to see it there.

I love the way you confidently state that the iPad 3 will be shipping in February. Strange, I must have missed the press release from Apple ;-)
Given that the iPad 2 was released late March this year, March 2012 would be more likely.
Reply  |  Post Message  |  Messages List  |  Start a Board

I like that the picture titled "MacBook Air" depicts a 15-inch MacBook Pro. I trust InformationWeek to provide me with accurate, weekly information regarding the value of technology to business, and reporting like this shows that I am in good hands.
Reply  |  Post Message  |  Messages List  |  Start a Board
Editors' Choice
Hot Topics