Apple's filed a patent application to coordinate the physical transfer of cash between two individuals.

Apple sees you as a cash machine, not merely as the source of revenue that pays for its products, but as a provider of paper money to other people.

The company has filed an application to patent what it's calling an "ad hoc cash-dispensing network."

The term ad hoc means "for this," and it is used to refer to something done for a particular purpose, in a manner that's often temporary. Apple is using the term to refer to individuals who, through an iOS app backed by Apple cloud infrastructure, meet so that one can obtain cash from the other.

There have been peer-to-peer finance companies like Funding Circle, Ratesetter and Zopa for years. But they merely coordinate loans; they don't dispense $20 bills. Apple appears to believe that it can combine electronic wallets with real ones.

The patent application refers to a "cash-dispensing server." While the wording is probably deliberately broad enough to encompass an actual mechanical cash dispenser, it's clear that Apple envisions people traveling to pass cash to each other on-demand.

Though the patent application describes the use of digital certificates to track the exchange of cash, its focus on coordinating the meeting of two people only makes sense if cash will be exchanged. Where electronic credit is concerned, transmission beats walking. 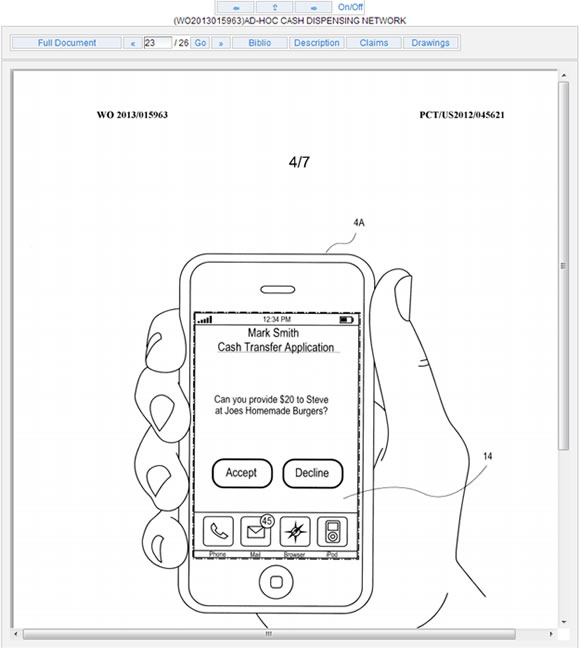 It seems unlikely that $8 in fees for a $50 cash withdrawal will appeal to urban iPhone users where no-fee ATMs are abundant and where services like TaskRabbit might be able to provide cash at a lower cost. But perhaps the novelty of on-demand social interaction, the security of a robust tracking infrastructure and the convenience of having the cash-bearer come to meet you will encourage participation, particularly if the cash source can show up in less time than it would take to walk to the closest ATM.

A fee structure that rewards Apple less and those opening their wallets more might provide a greater incentive to participate.

Apple doesn't address the potential for abuse except in its allowance that participants might want to limit their interactions to people in their social network, or friends of friends. "This familiarity will increase the trust level between the requesting user and proximate users," the patent application states.

As with any patent application, there's no guarantee the patent will be granted, even if it seems that patent examiners reflexively see innovation in what others would consider obvious and unprotectable. There's also no guarantee Apple will ever introduce such a service. But it's an intriguing idea.