50%
Tweet
As the markets for smart phones and tablets have grown, the markets for other consumer electronics products, such as dedicated GPS and point-and-shoot cameras, have eroded. According to the Consumer Electronics Association, the real news in 2013 will be the market growth of UltraHD (4K) televisions and automotive products.

When reps from the Consumer Electronics Association took the stage Tuesday in New York for a sneak-preview event for the 2013 Consumer Electronics Show in Las Vegas, they had one announcement that took nobody by surprise: tablets and smartphones sales were way up in 2012, and will continue to rise in 2013. But they also forecast a few surprises, not least of which being a remarkable amount of projected uptake for UltraHD (4K) televisions and automotive products.

CEA director of industry analysis Steve Koenig, and CEA chief economist and senior director of research Shawn DuBravac, described what they saw as being the major trends for consumer electronics for the rest of the year and next year. Smartphones and tablets were the most obvious winners both for the 2012 holiday season and 2013 overall. The generic category of "mobile connected devices," which includes smartphones, e-readers, and tablets, is collectively on the rise, along with connected household devices such as smart TVs.

The most obvious effect -- the explosion in tablet sales -- is backed by impressive numbers. Estimates for tablet sales in fourth-quarter 2012 are up a whopping 112% -- 32 million units for the season -- over the same period last year. Smartphones don't make as big a showing, but are still significant: 8% of the adults polled for their holiday wish lists asked for smartphones, versus 16% for tablets. A clear sign of how far tablets have come is in another statistic: By 2013, the total number of tablets shipped -- 100 million in just the U.S. -- almost will be on par with the number of smartphones shipped this year, 108 million. 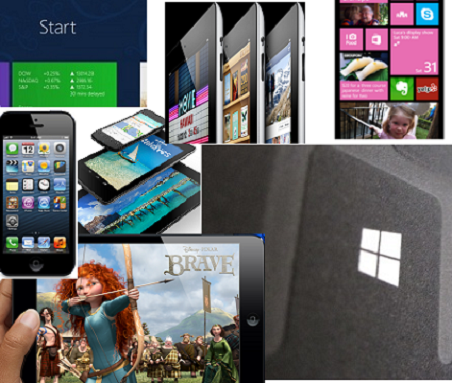 As anyone who's replaced their Garmin with an iPhone can tell you, tablets and smartphones both have cannibalized markets for other consumer technology products. Point-and-shoot digital cameras, camcorders, and game consoles have also all had their market share eroded by other portable devices in different measures.

Not all of these shifts are exclusively because of the rise of mobile devices, though. Messrs. Koenig and DuBravac both noted how many of those erosions are also driven by other factors. With point-and-shoot cameras, for instance, at least some of its market share has been lost to people looking for more advanced camera types such as D-SLRs, or newly-emerging form factors, such as action/wearable cameras.

Another cited phenomenon is how tablets and smartphones are serving more often as "hub connection" devices -- nexuses for health and fitness, home management, or other connected-life peripherals. Without setting a timetable, the CEA folks expected many in-home health technology innovations to allow a good many tests we'd normally perform in a doctor's office to be done without leaving the house. One such test involved adding a breath-test sensor to one's phone, which could be used to diagnose liver or kidney function, or provide blood sugar measurements for a diabetic.

What everyone seems to agree on is the continued erosion of the desktop PC and notebook market. In the wish-list survey, 7% of adults asked for a notebook, but only 2% wanted a new desktop PC.

Jumbo sets are booming despite their equally big prices. The Sony 84" XBR-84X900, for example, lists for a wallet-devouring $25,000. CES seems to believe those rising sales figures will translate into equally explosive sales for UltraHD 4K sets, which it estimates will start at 20,000 in 2013 but rise over the next four years to 2.5 million in 2016.

What remains unanswered is whether native 4K content, which will show off such sets at their best, will also come to market during that time. No home video form factor currently supports it, and over-the-air broadcast standards are only just now being considered for it. The most likely way to proffer 4K content for such sets is via digital delivery -- e.g., the Ultraviolet content-locker system that also figured into the CEA's talk about their entertainment industry relations. It's also not clear if these five-figure "consumer" devices actually are being sold to consumers or re-purposed for boardrooms, one possible explanation for accelerated future uptake.

CEA also noted a trend that even it found surprising: the rising presence of in-car technology as a marketing factor in the automotive industry. A screenshot from Ford's site depicted the 2013 Focus and 2013 Escape, with the in-car tech getting more aggressive billing than miles per gallon or the crash-test rating.

More Informa Tech Live Events
How Secure is Your Azure Cloud Security Environment?The State of IT & Cybersecurity OperationsThinking Like an Attacker: Strategies for Defense