50%
Tweet
The latest version of WinZip tries to make the case for spending money on an archiving utility by expanding its reach into cloud services Dropbox, Google Drive, and Microsoft SkyDrive. That's the theory, but in practice it's not all that groundbreaking.

Archiving programs are free and plentiful these days--my personal favorite is 7-Zip. So why would anyone--individual or business--want to spend money on one?

The newest version of the venerable WinZip archiving application tries to answer that question. What was once a humdrum archiving program has now expanded its reach into multiple cloud services. That's the theory, but in practice it's turned out to be not all that groundbreaking.

The archiving side of the program is familiar territory, with the biggest additions in recent versions being the .ZIPX format--better compression at the cost of backward compatibility--and 256-bit AES encryption. The cloud functionality is where things get interesting. WinZip lets you upload (their word is "share"), or unpack, archives directly to a number of cloud services -- Dropbox, Google Drive, and Microsoft SkyDrive, along with the ability to share links to files via Facebook and Twitter.

What this amounts to is using WinZip as an automated uploader and distribution system. If you already use the client-side tools for a cloud-storage service--for example, Dropbox, with its shell integration--you already have the ability to access the cloud drive using WinZp as if it were a normal Windows share. The new WinZip provides another way to access these services.

Even there, the automation is hackneyed: Any long-running activity, such as an upload to the cloud, causes the whole of WinZip's interface to be stupidly blocked by a modal progress dialog. It would have been nice to be able to minimize such long-running actions to the tray and get a pop-up notification when done, or queue them up for execution somewhere else. This also makes it impossible to, say, upload the same file to multiple services in one go. (There's support for uploading via plain old FTP, but it's limited in the same ways.) 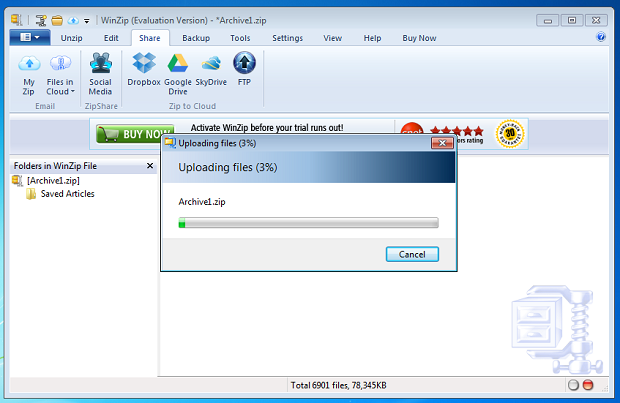 Unpacking archives to the cloud is unwieldy and slow.

Another vaunted feature, the ability to unpack archives into the cloud, is hobbled by the fact that the unpacking process doesn't actually happen in the cloud. The archive's contents are unpacked locally to a temporary directory, then uploaded to the selected service, one file at a time--an excruciatingly slow process if you're dealing with lots of files. In fact, the process of unpacking an archive into, say, a Dropbox folder using the native Dropbox Explorer interface is more convenient. It happens entirely in the background, and you receive a tray notification when the uploaded files are all present on the server.

Yet another touted feature is a small library of conversion tools that can be applied to files as they're added to archives. Image files can be automatically resized to a number of common dimensions, or watermarked with text. Documents can be converted to PDF, with an option to make them read-only files (essentially, converting text to images). The PDF engine worked fairly well with most of the documents I tried, but be warned if you have annotations present in the document, as they show up in the resulting PDF. There's no way to disable this short of saving the document without annotations, so it's no substitute for a proper save-to-PDF function. 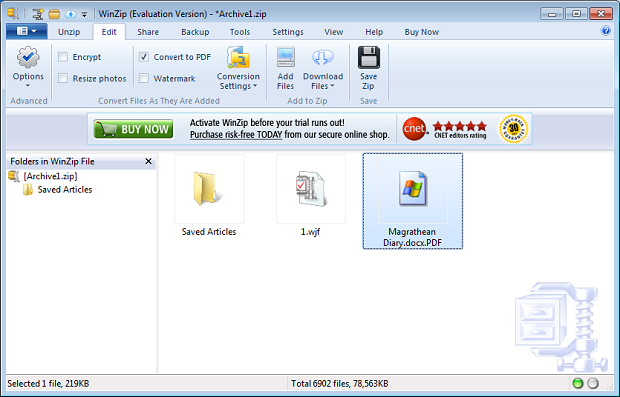 One drawback of WinZip's interface is how it doesn't always make clear the sequence of actions needed to accomplish something. If you create a new, empty archive, for instance, any conversion options (convert to PDF, etc.) need to be selected before files are added.

Some of the other integrated tools in WinZip are handy but not essential. WinZip Backup, available in the Pro edition of the product, allows predefined directories to be automatically archived with a button click. The wizard for this tool doesn't have the cloud-service choices seen in the rest of the program, but it isn't difficult to set the resulting file to save to a folder that's managed by a cloud service, such as a local Dropbox folder.

A more useful integrated utility is ZipSend, WinZip's file-delivery service, which allows files of up to 50 MB to be delivered via a link, echoed to social networks of your choice, without jamming up either your email or someone else's. That said, those who already have Dropbox or another service that allows a public link to an uploaded file might wonder why they need it.

Price: $29.95 (regular edition); $49.95 (pro edition).
Pro: Con:
We welcome your comments on this topic on our social media channels, or [contact us directly] with questions about the site.
Comment  |
Email This  |
Print  |
RSS
More Insights
Webcasts
Enterprise Database Strategies for 2020
Securing Active Directory the Way it Deserves
More Webcasts
White Papers
Container Security Best Practices: A How-To Guide
A Guide to the Iranian Threat Landscape
More White Papers
Reports
The Threat from the Internet--and What Your Organization Can Do About It
Collective Offense Calls for Collective Defense
More Reports