50%
Tweet
Ex-Google AdSense creator Gil Elbaz, one of LA's most talented entrepreneurs, is now collecting facts so his startup Factual can sell data to businesses. Elbaz believes building a database of facts will change the world, and he wants Factual to be the definitive provider. 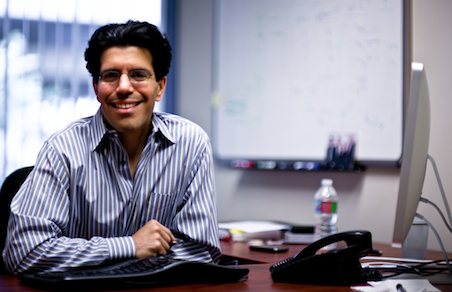 Ex-Google AdSense creator Gil Elbaz always envisioned a marketplace for data, like an eBay for facts. Only six days after leaving Google in 2007, Elbaz incorporated a new startup called Factual, a platform that takes big data and makes it accessible to businesses and developers.

Factual has become an open data platform for developers, a place where companies can buy data or trade data to build more efficient businesses.

Since launching Factual in 2009, Elbaz has expanded the company's customer base beyond tech partners such as Yelp and Foursquare to include a broader range from automobile shops to New York banks.

During the summer, over breakfast at Doughboys Cafe in Los Angeles, Elbaz described his desire to democratize access to data. For now, Elbaz is focused on generating the best data possible, so he can change the world, well, one fact at a time.

Previously, Elbaz co-founded Applied Semantics (ASI), a company that developed a language that evolved into Google's AdSense. Google acquired ASI in 2003 for $102 million, and Elbaz went on to work for Google to continue to build AdSense and pioneer the technology that surfaced ads based on the context of the page.

In the video below, Elbaz discusses what it is like to work in Los Angeles.

Read parts of our conversation about how big data is changing, how companies make business decisions, and how data is forcing IT and the enterprise culture to be more open.

BYTE: So you started with restaurants. How has your company changed since you first launched?

Gil Elbaz: We decided to focus on places. People are going around and figuring out where to connect with their surroundings. In 2010, what pushed us in this direction was when Facebook was a key buyer of this data--for Facebook Places. Today, a lot of Internet companies are using it--Groupon and real-estate companies like Trulia. We have lot of data from partnerships--like Foursquare and Citysearch--where data moves back and forth.

Right now, it is kind of an assembly plant for creating good data. We build all this machinery that creates good data and creates it in a low-cost way and we pass that savings on to the developer.

BYTE: Do you feel like IT departments and employees are shying away from being open about data?

GE: The whole culture around IT is to protect the data. People never get promoted for sharing, they get promoted for keeping it safe. That's a huge cultural issue. You can make the comparison to open source. There was a time, if you were an engineering manager, and you said 'I want to open source this code,' the VP of engineering [would say], 'We've invested money in this, why would we want to give it away?' Now, it's flip-flopped. The VP of engineering knows that code is extremely expensive to maintain. If you're going to own it, it better be valuable and revenue producing. Otherwise, just get rid of it. It's like owning an expensive house that can't be rented. You'd rather not have it on your books.

The same shift is happening in data. People are starting to realize that we can avoid owning it and outsource it or use open data. It saves [companies] more money and makes [them] more nimble.

BYTE: How are customers using your data?

Many of our customers who are using our API are building location-based services that help you find a hotel or restaurant in the area.

A lot of them aren't storing information about that restaurant in their own databases because they rely on us. Every time they ask us a query, [the data] is on Amazon. The fact that they don't have control over these 60 million records that we are maintaining and a few billion facts about these places is actually a good thing.

We've proven that we are reliable. Why reinvent that same wheel? Historically, that's completely opposed to how IT developers think. They want to take information and put it in a database and know that they control it. People used to do that with hardware. It used to be, you'd put your computer on a rack. Now it is somewhere on an Amazon cloud.

GE: That phrase we don't use. The idea of consumerization in the enterprise--I think has to do with enterprise folks using cheap or free, easy tools and it boiling up and management realizing that Gmail isn't actually a toy and we can use it across the enterprise.

A similar phenomenon [is happening with data]. Some developer doesn't have to ask anyone before building a [prototype] app using our API. [The developer wouldn't] need a budget because using our data [is free until a certain point]. It is free to start. Historically, it is expensive to buy data. Now [developers can] rent data from us.

BYTE: How will this change how much data we as individuals give up?

GE: Now ads lack local context. If you're in a coffee shop, maybe we should not offer you a coffee coupon near by. Maybe we predict what you'll eat next. So we should offer you a lunch? There's no end to context.

Context is all about the meta data about you and your life. It depends on the level of access to data. Maybe right now, you're not sharing your calendar. Over time, people are willing to share. In your home city, based on your typical movement, you're probably on your way to work, or leaving work. By the speed of your movement, [data would reveal] if you drove or walked here.

We welcome your comments on this topic on our social media channels, or [contact us directly] with questions about the site.
Comment  |
Email This  |
Print  |
RSS
More Insights
Webcasts
5 Steps to Integrate SAST into the DevSecOps Pipeline
Cloud Security Threats Enterprises Need to Watch
More Webcasts
White Papers
Using AI to Power AppSec
[IT Trend Report] The Future of Cloud
More White Papers
Reports
Can You Spare 10-12 Mins to Help Us Out with a Survey on Tech Trends?
Got 7 Minutes? Dark Reading Needs Your Help With Our Survey on Incident Response
More Reports