In Defense Of Steve Ballmer - InformationWeek

50%
Tweet
Is Steve Ballmer the "worst CEO" in America today, as a Forbes article claims? It's an utterly unfair analysis.

Is Steve Ballmer the "worst CEO" in America today as a Forbes article claims? To believe this, you have to be really picky about your facts, and ignore some really big and obvious ones. A better case can be made that Microsoft suffered through the 2000's because Ballmer was cleaning up the messes of the Bill Gates era.

Big Obvious Fact #1: Ballmer took over as CEO in 2000. This was also the year in which the U.S. antitrust conviction against Microsoft occurred. Five months after he took over as CEO a Federal Judge ordered the breakup of the company.

In the end, the actual legal remedies were minor, but a huge cloud of uncertainty descended over the company making its future prospects questionable.

BYTE Contributing Editor Chris Spera agrees with Forbes that Ballmer has been a disaster. Click here to read his critical evaluation of Microsoft's CEO.

Big Obvious Fact #2: The first decade of Ballmer's CEO-ness was the era of the security breach, and Microsoft's products were unprepared. I wrote about security all the way through that decade. Not long after Windows XP was released it became clear that it, Office, and Internet Explorer were sitting ducks against attack. Quite a bit of Windows development effort in that decade was dedicated to making Microsoft's products more resistant. By the end of the decade Microsoft clearly had accomplished this. The company is widely acknowledged as an industry leader in security.

Yes, Vista took too long to finish and it was a flop, as Windows versions go, but any other company on the planet would kill for such a flop: At the release of Windows 7, there were 400 million Windows Vista users on the Internet.

The Forbes article also claims that "Windows 7 and Office 2010 did nothing to excite tech users...." It might be fair to say that users didn't get excited about Office 2010 or even Windows 7, but they sure bought a lot of them. Apple gets all the excitement, but on the desktop its market share is still puny. Microsoft continues to own the desktop OS and Office suite markets, all the way through the Ballmer era.

Now the fact remains that Microsoft's stock performance has been, to put it kindly, lackluster. Below is the last 20 years of Microsoft stock prices from Yahoo! Finance. 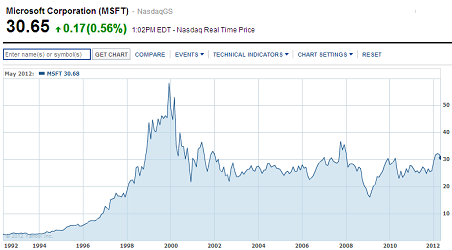 Other than a couple of brief trips north and south, the stock has been stuck on the 20's for 10 years. They do, on the other hand, pay a dividend that has increased steadily over time, which I guess is part of why stockholders have been patient. Remember, the company remains highly profitable--it's just not sexy anymore.

But at this date it is fair to ask what big things Microsoft could do to "turn things around." If you argue that the job of the CEO is to maximize shareholder value, what could he do to further that? Maybe it is time to break up the company. But into what? It's stupid and doomed to failure for all the reasons it was stupid and doomed to failure back when Judge Jackson ordered it.

First, we have to wait for Windows 8 and see if it can gain good market share in tablets and phones. We know Windows will continue to do well on desktops because there are no credible alternatives.

Changing faces at the top isn't going to make anything different. Go one and two and three levels down in management and there has been considerable turnover at Microsoft over the years, and these people are not just flunkies taking orders from Ballmer.

Microsoft's failures over the last decade have been conspicuous and embarrassing, but it had failures before; all great and successful companies experience failure. For some reason, investors aren't excited about a company that has consistently grown, has been consistently profitable, and pays a growing dividend. How can the CEO of such a company be the worst one in the country?