At Intel Developer Forum, the chip giant charted a roadmap in which it strives to reach "all of humanity." Take a look at the technologies, from voice to touch, that Intel's taking along for the ride. 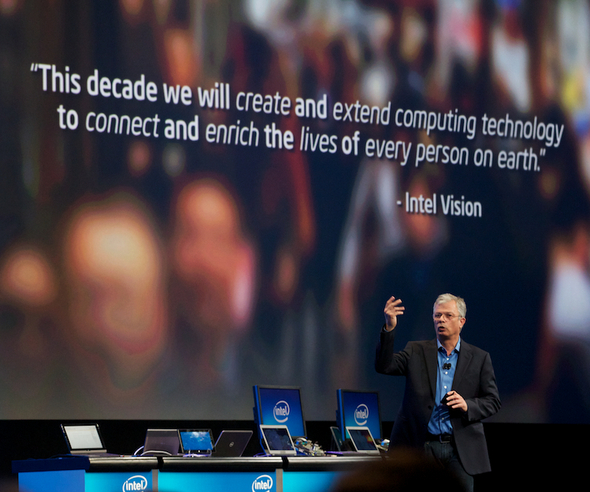 Can Intel "touch everyone on Mother Earth"?

For many companies, such grandiose claims might summon a dismissive eye roll. But the chipmaker is one of the few organizations big enough and, as the primary perpetuator of Moore's Law, innovative enough to actually make good on the intent.

The grand ambition was declared by Dadi Perlmutter, executive VP and general manager of Intel Architecture Group, during his keynote address Tuesday at the Intel Developer Forum (IDF) in San Francisco. Intel's vision is "not just about creating great business for its stockholders," he said. Rather, the company strives to create "things for humanity. Things that will touch everything, everyone."

It's a great sound bite--but how does Intel plan to move forward? After all, even Apple, current ruler of the "world's biggest company" throne, has been limited to more modest endeavors--like saving the economy.

For Intel, the answer starts inside the machines, of course. At IDF, Perlmutter provided the first official details of the newest Core processors, code-named Haswell. The chips won't change the world by themselves--but by offering better performance while consuming less energy, they'll be a good start. And even if world-changing aspirations fall short, the new micro-architecture's graphics-processing boost should make gamers happy.

But the chips are facilitating advances that redefine the computing experience. Perlmutter declared that touch-enabled devices are only the beginning of expanded computing interfaces, and demonstrated forthcoming voice and gesture-based functions that will allow us to interact with machines in more ways. Someday, he indicated, the Internet of Things will stream data not only from traditional computers but also most other objects with which we engage--a forecast that would allow our environments to learn about us and respond to our needs more accurately.

The varied form factors facilitated by smaller, more sophisticated chips such as Haswell are steps in this direction, as they not only make devices more mobile but also change the tasks for which devices are used. Doctors, one IDF demonstration asserted, can use tablets to access patient documents more effectively and ultimately provide better care.

All of this technology will have an impact--but can it be as grand as Intel hopes? The company is taking steps such as a contest to attract developers to help accelerate the plan. The biggest results are still years away, so only time will tell. But in the meantime, read on to learn which technologies Intel thinks will one day reshape our world.

Seeking a Competitive Edge vs. Chasing Savings in the Cloud Joao-Pierre S. Ruth, Senior Writer,  7/19/2021
White Papers
How to Plan for Endpoint Security Against Ever-evolving Cyberthreats
Definitive Guide to Secure Remote Access
Adaptive Multi-Layered Defense Is the Key to Cyber-Resiliency
The Top 10 Threats of Data Sprawl and How to Mitigate Them
The Top 5 Fails of DLP