The systems include custom software to speed start-up and shutdown. 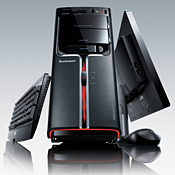 Lenovo introduced three laptops and three desktops that run Windows 7 and include software to improve system boot and shutdown times.

The three laptops are the IdeaPad U150, U550 and Y550P and the desktops are the IdeaCentre B500, K300 and H230. All the systems, introduced Monday, run Intel processors, from Core 2 Duo chips to the highest-end Core i7 PC processor.

The systems include Lenovo's Enhanced Experience software, first announced in September, that boots Windows 7 up to 56% faster than the time it took to start up Windows XP and Vista in Lenovo PCs, Lenovo said. Also, the new systems shut down in as little as five seconds.

Microsoft released Windows 7 Oct. 22, hoping to leave behind the poor reception its buggy predecessor, Windows Vista, received in the consumer and business markets. Lenovo and other computer makers, including Acer, Gateway, Hewlett-Packard and Sony, have announced Windows 7 PCs in time for the holiday shopping season.

The highest performing notebook among Lenovo's new laptops is the Y550P, with Intel's Core i7 processor. Also, the system features Nvidia discrete graphics and a 15.6-inch screen. The company is marketing the PC as a multimedia system that's the most powerful laptop in Lenovo's consumer portfolio. Pricing starts at $1,149.

The IdeaPad U150 is Lenovo's slim-and-light laptop in the new products. The notebook is a half-inch thick, weights under three pounds and features an 11.6-inch high-definition display. It runs an Intel Core 2 Duo processor and supports up to 8 GB of system memory. Pricing starts at $585.

The last of the new laptops, the U550, is more of a mainstream system. The PC is almost an inch thick, features a 15.6-inch display and runs a Core 2 Duo chip. The system also has a built-in DVD drive and integrated fingerprint reader. Pricing starts at $650.

Lenovo's new desktop PCs include IdeaCentre B500, an all-in-one system that features an Intel Core 2 quad-core processor, discrete graphics, up to 8 GB of system memory and 1 terabyte of storage. The desktop also includes a 23-inch screen, JBL-brand integrated speakers and a remote control. Pricing starts at $649.

The K300 is a tower desktop, also running a Core 2 quad-core processor. The system includes RAID-configured hard drives for added storage and the company's "power control switch" that makes it possible for users to adjust the power level for maximum performance to more energy-efficient modes. Pricing starts at $499.

At $449, the H230 has the lowest starting price. The system comes in a "range of hard-disk drives and memory configurations," Lenovo said. With the H230, Lenovo apparently is appealing to buyers who prefer options for customization.

Register for Interop New York and see the full range of IT solutions to position your organization for growth. At the Jacob Javits Center, Nov. 16-20, 2009. Find out more and register.